It’s true that the extreme cold curtailed output from coal and gas power plants and even one nuclear facility. It’s also true that windpower works in cold northern latitudes. The state’s energy infrastructure just wasn’t prepared for such low temperatures. And the Texan power market, overseen by ERCOT, is a free-wheeling bazaar with hundreds of power providers all vying for business. Households routinely switch from one provider to another. As a result, the average retail price of electricity in Texas is 82% of the national average. But the market structure clearly doesn’t value 100% reliability. 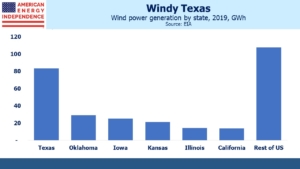 Both of these problems – winterizing equipment and altering market incentives for power providers, can be fixed.

Texas generated 17% of its electricity from wind in 2019 (most recent figures available). They are easily the leading state. At 83 Gigawatt Hours (GWh), they are 28% of the U.S. total and well ahead of #2, Oklahoma at 29 GWh. Wind power in Texas has been widely regarded as a success.

Was over-reliance on windpower to blame, as Republican politicians claim? Or did the cold weather show no favorites, with natural gas, coal and nuclear plants all going offline as well? 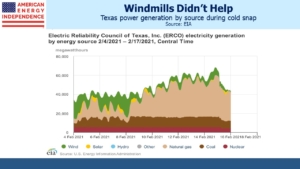 Perhaps the chart showing power generation by source can be interpreted to favor either side, but an objective view would surely conclude that natural gas generation soared when needed, uniquely among all power sources albeit not by enough to avoid power cuts. Wind power became negligible. It’s hard to argue that more wind power would have solved this problem.

Climate extremists will argue that more extreme weather is an early warning of the adverse effects of global warming. This alone adds urgency to the energy transition. But if Texas had already converted their power generation to be 100% emission-free, that would remove around 200 million metric tonnes of CO2 emissions, 0.5% of the total emitted worldwide annually. The weather in Texas wouldn’t change. Advocates would argue that such leadership might induce behavior elsewhere. It would need to be in China and other emerging countries to make a difference.

In How to Avoid a Climate Disaster, Bill Gates offers a pragmatic view loaded with useful facts. We’ll be writing a review soon, but he notes the low power density of wind, which produces 1-2 watts of power per square meter. Solar is 5-10, while fossil fuels are 500-10,000. Wind takes up a lot of room.

It may simply be coincidence, but following California’s heatwave-induced blackouts last year (see California Dreamin’ of Reliable Power), two big states with a heavy reliance on renewables have suffered power outages. Since it’s not always sunny and windy, solar and wind have their place but are unwise beyond a certain threshold.

Both states could have redirected capital outlays from renewables to making their existing power supply and grid more reliable. In this way, environmental extremists’ obsession with growing unreliable sources of energy contributed to the blackouts. Gates argues that intermittency limits their ability to provide a significant portion of our power.

Texas is 26% renewables and California 29%. Few states should want to emulate them.

The deception of climate extremists is that renewables are cheaper and will create jobs. If that was true, the oil and gas industry wouldn’t exist. Energy today is cheap, perhaps unsustainably so. Technologies already exist to capture CO2 emitted from the manufacture of steel and cement, as well as from electricity generation. Implementing them will cost money and raise prices, but that should be no surprise.

A serious effort to reduce emissions will impose regulations or additional costs on fossil fuel emissions, which will create the necessary incentives to install equipment that curbs emissions, just as coal plants are required to do for the sulfur they emit. Natural gas will fare well, since it’s cheap, not intermittent and relatively clean burning. That’s why long term forecasts of energy use show natural gas enjoying continued growth.