Why Keeping Up With Inflation Isn’t Enough

Cher wanted to turn back time to regain love lost. But economists are always turning back time to adjust prices for inflation, to calculate a measure in today’s dollars. This is to provide a relative price, comparable to current purchases.

Although mathematically correct, applied over decades or more it produces a misleading picture of what consumers were spending.

For example, in 1931 Schick launched the electric razor, going on to sell over a million over the next two years. Priced then at $25, there’s no need to convert to 2019 dollars — it was obviously a luxury good. Based on Consumer Price Inflation since 1931, Schick’s new product would now cost sixteen times as much, $412. Today, you can still buy an electric shaver for $25. It probably offers a better shave too.

Buying a shaver was clearly an expense requiring some thought. But by considering only inflation, this analysis assumes disposable incomes have risen by the same rate since then. GDP per capita was $623 in 1931. A razor therefore cost 4% of this measure of annual income per person. Today’s GDP per capita is $62,590, 73 times as big. Incomes have risen roughly four times as much as inflation since 1931, which reflects rising living standards.

If you really want to appreciate the comparative sacrifice required to be quickly clean-shaven during the Depression, Schick’s shaver today would have to be $2,500. That’s 4% of 2018 GDP per capita, the same proportion required in 1931. This more accurately translates the choice consumers made back in 1931.

In 1955 gasoline cost 29 cents a gallon. That’s $2.61 in today’s dollars as conventionally calculated, or $6.96 if we hold it constant as a proportion of GDP per capita. Transport takes up a smaller percentage of household budgets than in 1955. To the anguish of peak oil devotees, driving is cheap.

The purpose of this thought experiment isn’t merely to demonstrate that stuff used to cost more than you thought; there’s an important investment lesson here. Earning a return equal to inflation on a portfolio, enough to preserve its purchasing power, is every saver’s minimum goal. The point is to be able to maintain today’s standard of living in the future. The problem is that living standards themselves improve. 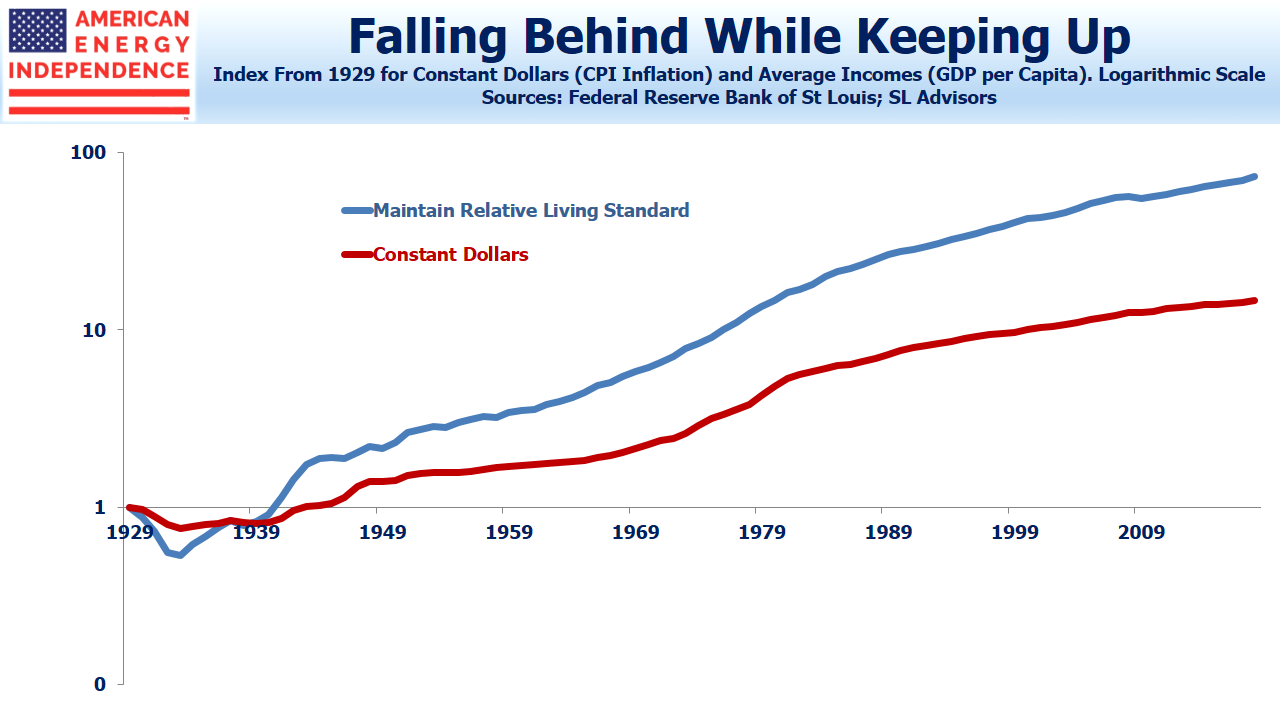 A family who earns the median income, which supports an average standard of living, presumably wants that happy state to persist into retirement. In 2000, this average earner brought in $40,597 (median income per family). Correctly forecasting 2% inflation, she would anticipate that $50,000 would be adequate by 2018 to maintain that 2000 lifestyle. Meanwhile, median family income rose to $60,000, because of rising living standards on top of inflation. Following conventional advice, our average family has fallen from the middle of the pack to only 83% of the median income.

Economists retort that our saver can still purchase a basket of goods and services in 2018 with the same utility as she could in 2000. But she’ll feel poorer, because her friends who have maintained their incomes relative to the average will have moved ahead.

There are two points here. First, when it comes to inflation, economics measures what it wants to, not necessarily what non-economists think is being measured or what we want. Most of us care about maintaining our income relative to our peer group today, rather than constant utility.  John Rockefeller’s fabulous wealth couldn’t buy plane travel, internet access or TV during his lifetime. Many of us today enjoy a higher standard of living than the richest people did several decades ago.

The second point is that although investors can’t determine what set of investment returns are available, they should recognize that merely keeping up with inflation is going to leave them feeling poorer than they expected.  Over the past couple of decades, per capita GDP has grown at almost twice inflation. Savers looking to the long term should keep this in mind, and build a bigger nest egg.