Goldman almost always sidesteps trouble. That’s one of the conclusions from the Archegos blow-up that is estimated to have cost the firm’s lenders as much as $10BN.

Imagine the discussion among Credit Suisse, Nomura, Morgan Stanley, Goldman Sachs, UBS and Wells Fargo as they considered an orderly liquidation of the hemorrhaging Archegos portfolio. It was a mismatch of men and boys – according to reports, Goldman warned that the market would quickly realize the scale of the problem, depressing the prices of what they were trying to sell and leading to a very disorderly liquidation. 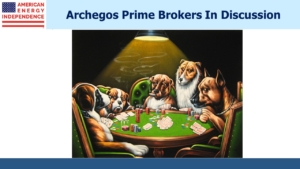 It seems so obvious. Some Wall Street firms are sharper than others. Goldman and Morgan Stanley, who had sensibly adopted the role of observers not participants, evidently relied on this subtle distinction to immediately sell the Archegos collateral they held once they understood the scale of the problem. Nomura and Credit Suisse, in a high stakes version of the Prisoner’s Dilemma, thought time was on their side. They just forgot that Goldman wasn’t.

Goldman Sachs is full of street smart, talented people. In the 1980s and 1990s when I was trading interest rate swaps at JPMorgan, if Goldman was your counterparty to a trade it was worth taking a second look. They rarely seemed to be forced participants – often they’d identified a mis-pricing or arbitrage opportunity. Whenever I found Goldman on the other side of my trades, I often traded less than my full position while I figured out what could be driving their decision to go the other way. Pausing rarely cost the opportunity – markets moved their way more often than not.

In 1998, when hedge fund Long Term Capital Management (LTCM) was blowing up, their biggest swap counterparties gathered to discuss an orderly liquidation. LTCM was our biggest counterparty, but then LTCM was everybody’s biggest counterparty. Their abundance of PhDs and egos had created a colossus that generated tens of millions of dollars a month in profits for the banks trading with them.

I was running interest rate derivatives for Chase Manhattan (later merged into JPMorgan). I received a phone call late one night from a colleague informing me that LTCM was collapsing due to many highly leveraged bets going awry simultaneously. The following morning, our head of credit summarized the exposures we and the other big counterparties had to LTCM. As with Archegos, an orderly liquidation of positions looked to be the best option. But the economic incentives were similar to a cartel – each member was incentivized to secretly cheat.

The LTCM bank group was apparently sworn to secrecy. The information I had been provided made me an insider – it was obvious what trades should be done to generate immediate profits (“pay fixed in ten year swap spreads”) but I respected the rules and waited. Goldman didn’t. I saw them trading on the information they possessed about LTCM’s portfolio.

Goldman never got in trouble. Maybe what they had wasn’t inside information under a strict legal definition – interest rate swaps were bilateral agreements, not SEC-registered securities. Maybe they understood the information sharing agreement to be loose enough to allow trades to be done. What I do know is that they acted differently than we did. David Pflug, the patrician head of credit at Chase, was a man of his word who would never have resorted to legalistic identification of loopholes. Not trading on the information we had required no further explanation. We passed up a hugely profitable trading opportunity – but LTCM had been a money spigot for years.

Derivatives traders use the Greek alphabet (delta, gamma, theta) to identify portfolio risks. David Pflug later commented on the glittering mathematicians of LTCM, “for all their knowledge of Greek, they didn’t understand the meaning of hubris.”

I’ve always felt that Goldman regards legal and regulatory risk as just another risk alongside credit, rate, FX and equity risk. They all offer a risk/return trade-off. Most banks, including the one I worked at, put legal and regulatory risk off limits. There was no such thing as acceptable legal risk. Having watched Goldman over decades, I believe their culture incorporates a highly sophisticated assessment of legal/regulatory risk that allows them to consider the upside of a transgression against the possible penalty. They are very good at it, which is why they so rarely mis-step. The 1MDB disaster is one of the few.

It looks as if Goldman used the Archegos discussions to obtain a clear view of the group’s exposures while retaining the freedom to act. They would have considered their market risk as well as any legal/reputational downside from moving quickly. As skilled risk managers, they quickly decided that your first loss is your best one and sold. Credit Suisse and Nomura discovered they were playing poker at the wrong table.

Credit Suisse is estimated to have lost $3-4BN, and Nomura $2BN. As Warren Buffett has said, if in a poker game you don’t know who the patsy is…