Why Energy Transfer Can’t Get Respect

If Energy Transfer (ET) was a private company contemplating an IPO, the 15% Distributable Cash Flow (DCF) yield indicated by their underwriters would draw laughter. The bankers would be ushered out of the conference room.

Yet that is the lowly valuation investors assign to perhaps the least loved pipeline company in a sector that investors find lukewarm at best. ET is priced far below where they’d take the company public, if it wasn’t already a listed company. CEO Kelcy Warren and his team continue to execute and beat expectations on earnings. Last August Kelcy joked that, “A monkey could make money in this business right now.” (see Running Pipelines is Easy). Inviting critics to find fault, they nonetheless still deliver good results. Unlike most MLPs, ET (legacy Energy Transfer Equity) has never cut its distribution.

The market prefers style over substance, for on the soft issues of PR and Investor Relations (IR), ET’s record is sharply at odds with their financial performance. From their ill-fated pursuit of Williams Companies (WMB), the dubious dilution of shareholders with management-only convertible preferreds (see Will Energy Transfer Act with Integrity?) and the optically poor dispute over the Dakota Access Pipeline, this is a company that cares little about its image. Pennsylvania’s huge natural gas boom has been helped by a generally pro-energy regulatory regime, but ET has even managed to make enemies there.

Warren Buffett recently explained how Berkshire’s (BRK) $10BN investment in Occidental (OXY) was negotiated with no contingencies (save that they acquire Anadarko). Buffett needs to trust his investment partners. On this basis, ET is an implausible candidate for a BRK investment.

On the 1Q19 earnings call, Kelcy commented on how he is listening to the market. He’s been, “…trying to understand what the market would like to see us to do. What causes our unit price to perform better, in other words.”

Our advice would be start behaving like the kind of company that would interest Buffett.

ET’s 1Q19 earnings included EBITDA of $2.8BN and distribution coverage was ample at 2.07X. This exceeded expectations, although the 8% yield suggests some fear a cut. They guided to $10.7BN in 2019 adjusted EBITDA. ET’s stock had weakened over the prior month, so expectations weren’t high. Nonetheless, on the day following earnings ET slumped 1.3%, twice the drop in the broad-based American Energy Independence Index.

Kelcy Warren might compare ET with another big pipeline company, Plains All American (PAGP). If ET has delivered consistently good operating results distorted by a bad corporate image, PAGP has done the opposite. Their distribution relied unwisely on a volatile business segment (Supply and Logistics, S&L) whose arbitrage margins virtually disappeared from 2013 to 2017. The narrative accompanying results changed from “it’s skill not luck” to “forces out of our control”. The 2016 sweetheart “One and Done” preferred deal to shore up finances was anything but. 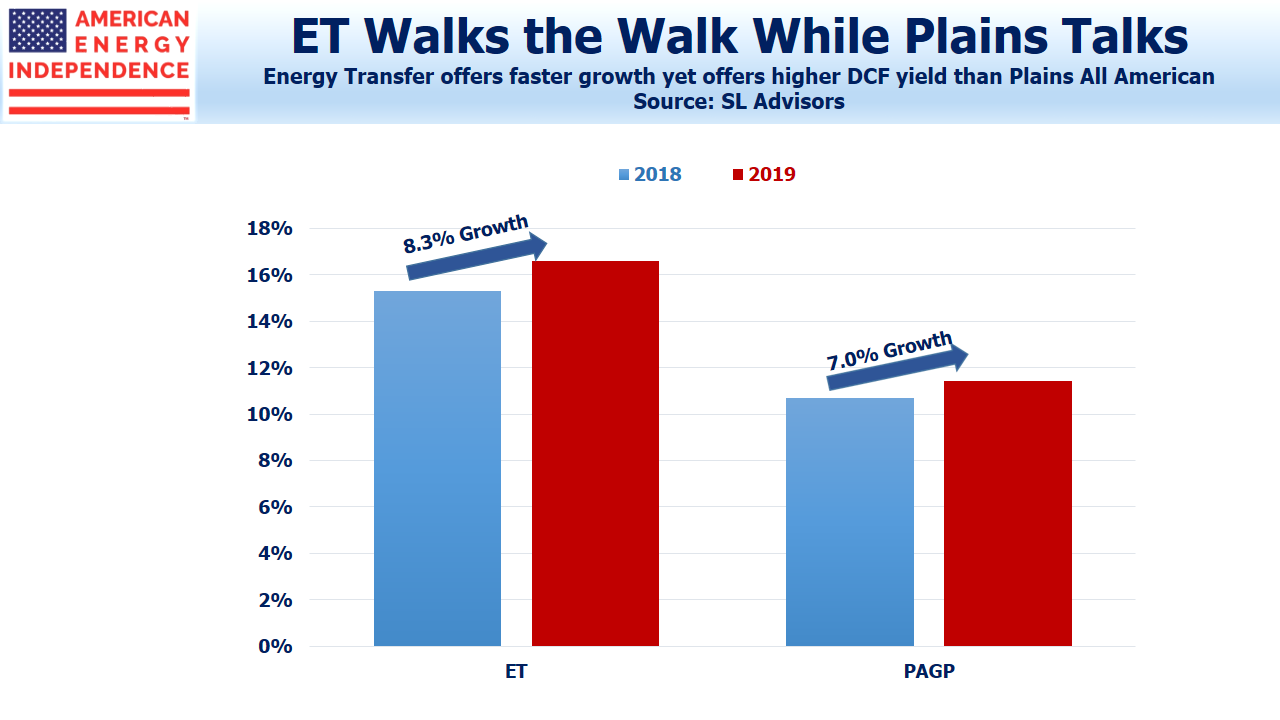 PAGP’s 2017 acquisition of the Alpha Crude Connector was ill-advised, and along with other growth projects exposed too-high leverage when margins fell. As a result, investors in PAGP subsequently suffered two distribution cuts.  Back in 2010 when the shale oil boom was in its infancy, PAA yield seeking investors received $3.75/unit in distributions.  In 2018 they received just $1.20 per unit.  It’s why income-seeking investors often feel so betrayed by MLPs. Nonetheless, the market has not punished PAGP’s stock as much as ET’s, although it’s also cheap. Former CEO Greg Armstrong’s folksy style created sufficient goodwill among investors that PAGP has a distribution yield a third less than ET’s. Their DCF and free cash flow are growing, but not as fast as at ET.

PAGP’s 1Q19 results were also good, buoyed by their resurgent S&L segment. Their 10% DCF yield reflects some concern that past mistakes will be repeated, and arbitrage margins are hard to forecast because they rely on shortages of pipeline capacity which can be fleeting. But their IR people at least have a more positive corporate image against which to tell their story.

As if to punctuate attractive valuations, on Friday Buckeye (BPL) was acquired at a 32% premium to its recent average price. BPL’s foray into international storage terminals led to chronic underperformance in recent years that even the buyout hasn’t rectified. They have mismanaged themselves into a takeover, at pricing substantially higher than ET’s.

Both ET and PAGP are cheap. They each possess skills that would benefit the other. ET’s rebarbative management style contrasts with their efficient execution and strategic foresight, an area where PAGP needs to regain credibility after mis-steps in recent years. ET walks the walk, and PAGP talks the talk.

If each company can improve its weaknesses, they’ll continue to draw investors to an extremely cheap sector offering substantial growth.

We are invested in BRK, ET, PAGP, and WMB.