A friend of mine recently returned from a trip to Texas and Louisiana, where he met with many contacts and friends in the energy infrastructure sector. In-person discussions and site visits can often leave a more powerful impression than reviewing events from a distance. My friend, an experienced investor, returned with his already optimistic view on the Shale Revolution strongly reaffirmed.

Some of the charts below illustrate why. Permian region oil output barely dipped in 2014-15 during the collapse in crude pricing. The widely described drilling efficiencies lowered break-evens (see America’s Path To Energy Independence: The Shale Revolution), and as the oil price recovered, so did production. 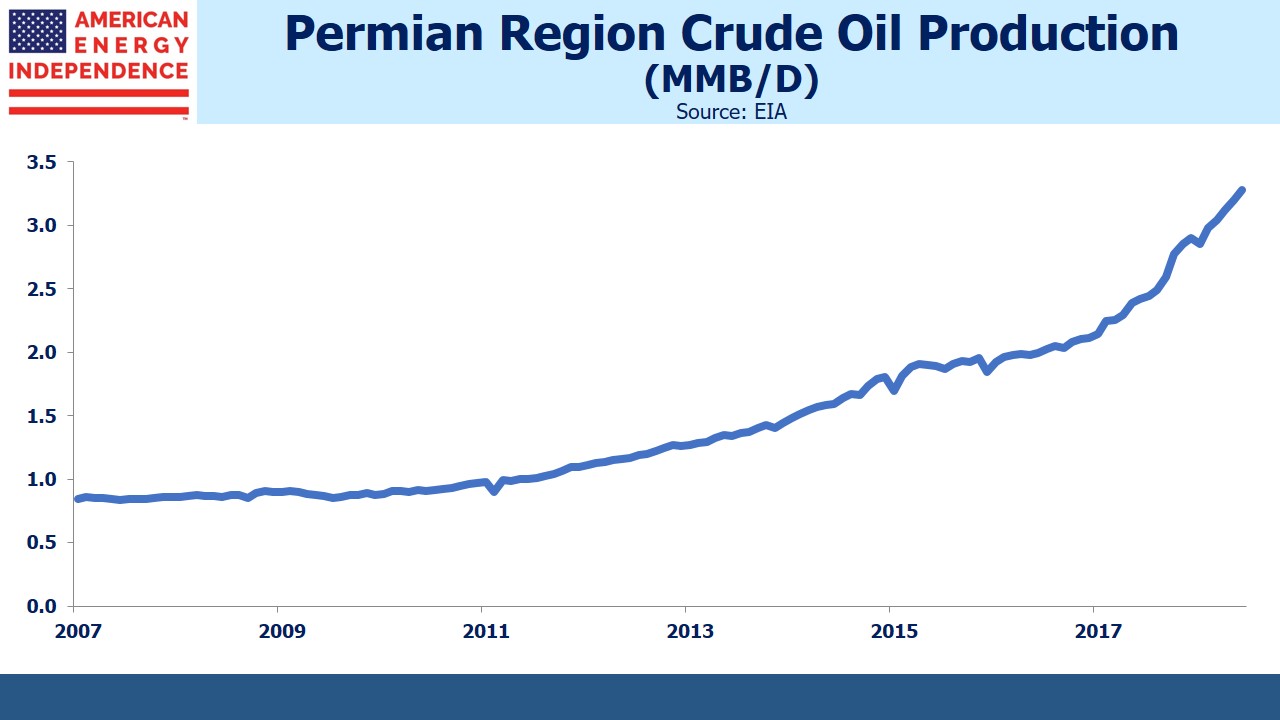 Today, Permian output is visually quite striking, rising at an increasing rate. This higher growth rate is what’s causing the infrastructure bottlenecks. Year-on-year increases of 0.8 Million Barrels per Day (MMB/D) were not obvious based on recent history and clearly few were ready. This is why the WTI basis between Midland, a collection hub for Permian crude, and Houston, recently reached $20 per barrel. There’s insufficient pipeline capacity to move the crude (pipeline tariffs are typically $1-$3 per barrel). 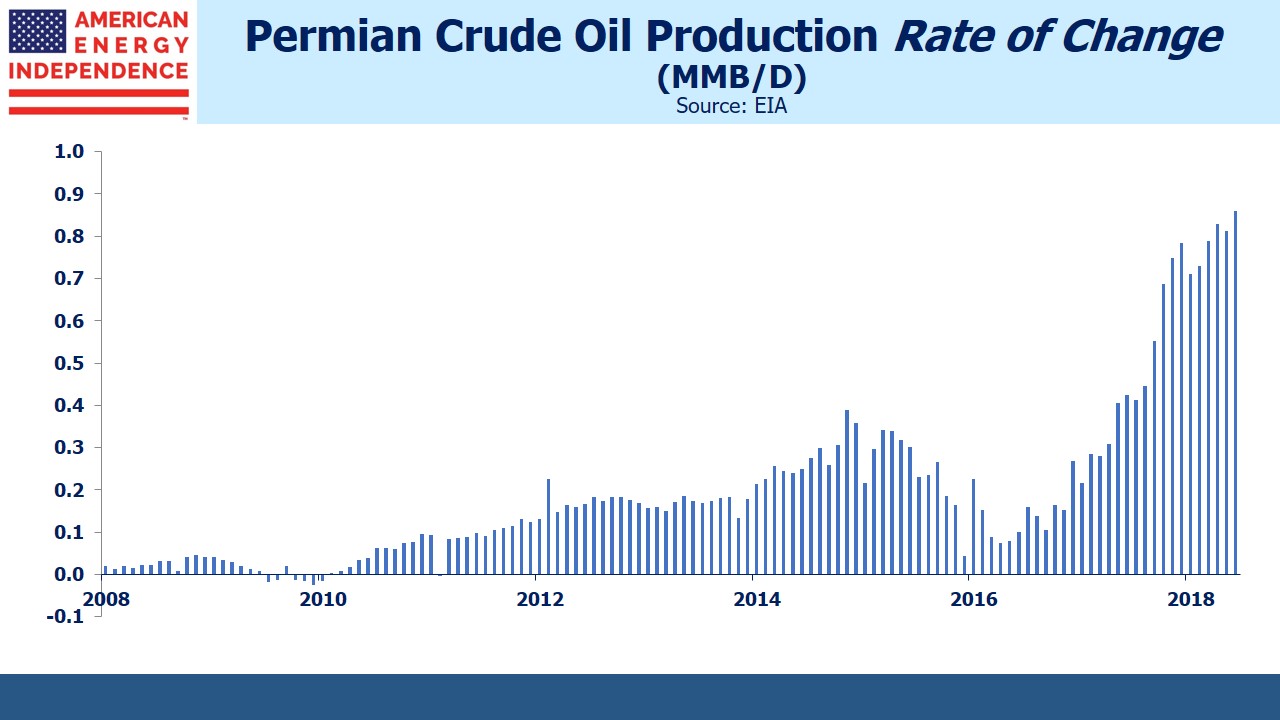 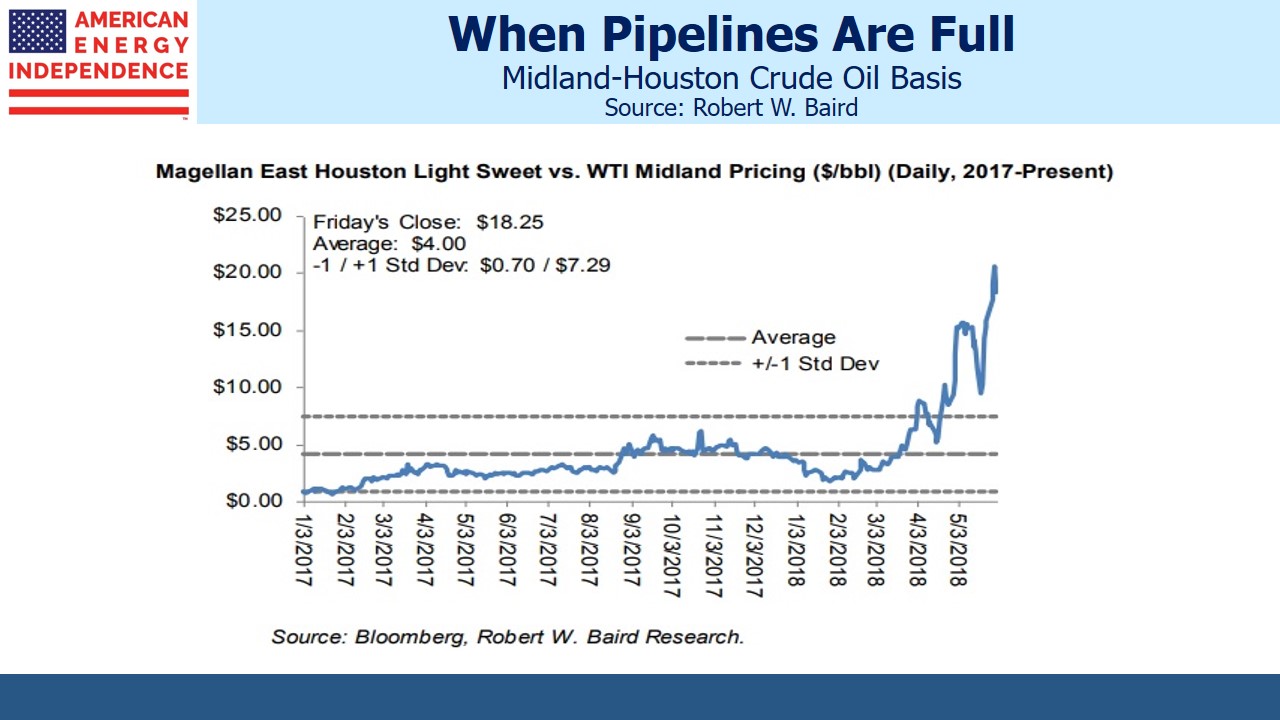 Clearly, even crude by rail (typically $7-$10 per barrel) can’t solve the problem, since the basis trades even wider than this, at the $20 cost of moving the marginal barrel. Trucks and truckers ($10-$20 per barrel or more) are in high demand, and because new pipelines are likely to be available late next year, large investments in truck fleets look unattractive given that the problem is temporary. Fortune Magazine’s Lone Star Rising provides a great feel for the local effects of the current oil boom.

Moving the associated natural gas that is often produced with crude oil in the Permian is also hitting infrastructure limitations. In fact, it’s likely that any moderation in crude output will be caused by waiting for the infrastructure to catch up. Permian natural gas is delivered to the Waha hub, and its basis versus the Henry Hub benchmark looks set to widen from $1 per Million Cubic Feet (MMCF) to $2. With natural gas trading at under $3, it’s not inconceivable that there may be no bid at Waha, a possibility mentioned more than once by energy executives at the Orlando MLP conference recently. Oil producers are hoping that regulators in Texas will allow more flaring of natural gas in the interim.

As a result, the U.S. has some of the cheapest natural gas in the world. Exports of Liquified Natural Gas (LNG) are currently 3.6 Billion Cubic Feet per Day (BCF/D). The U.S. Energy Information Administration expects LNG exports will rise sharply to 9.6 BCF/D by the end of 2019, reaching 13 BCF/D by mid-decade. The growing global trade is causing a shortage of specialized LNG tankers.

Although the Shale Revolution is a U.S. phenomenon, its impact is being felt around the world. Global crude oil demand of around 98 MMB/D is growing at 1.5 MMB/D annually. Less attention is given to depletion of existing oil fields, which is commonly estimated at 3-4%, or 3-4MMB/D. New supply needs to cover this shortfall as well as meet new demand, which means the world needs 4.5-5.5 MMB/D of additional output every year.

Wood Mackenzie recently forecast that decline rates would reach 6.3% for non-OPEC, non-U.S. shale, within three years. They expect U.S. production growth to be triple that of the next biggest country between now and 2025. However, even the most optimistic forecasts of U.S. output leave the world in need of other, conventional sources of supply to balance the market.

Global oil demand is expected to grow for at least the next couple of decades, albeit it at a slower rate, and it’s widely assumed that Electric Vehicles (EVs) will reduce overall demand. Forecasts from the EIA, the International Energy Agency, Exxon Mobil and Wood Mackenzie are all broadly similar in this regard.

An unusual view, but one persuasively made by my partner Henry Hoffman, is that EVs are a huge positive for the U.S. shale business – and not simply because their need for electricity will drive demand for natural gas. Since conventional oil projects take many years to return capital invested (they are “long-cycle”), their investment decisions needs to consider the evolution of EVs and how they might impact long term oil demand and pricing.

EV adoption rates are uncertain, and conventional oil projects are exposed to an EV upside case which will, in some instances, make pursuing them too risky. Shale producers need give little consideration to EVs, because the short-cycle nature of their pay-off is well short of the timeframe over which EVs may have an impact. Because shale wells return cash invested typically within a couple of years, production can be hedged in the futures market. Such wells have very sharp decline rates, so oil demand even five years in the future is barely relevant to today’s investment decision.

Uncertainty about the rate of improvement in EV technology clearly hinders 10-20 year oil investments, which plays to the advantage of the U.S. shale producer. This is not a view that’s widely held, yet it’s probably already having an effect (see Why Shale Upends Conventional Thinking). It strikes me as a really big idea, one that is likely to depress conventional exploration for many years, keeping crude prices higher and underpinning continued growth in U.S. shale. It was almost certainly a factor in Exxon Mobil’s (XOM) announcement earlier this year of a five year, $50BN investment in North American oil and gas production (see The Positives Behind Exxon Mobil’s Earnings). The entry of the biggest integrated oil companies into shale will lead to more predictable output since they won’t be as reliant on external financing. It also validates shale as a long term story. 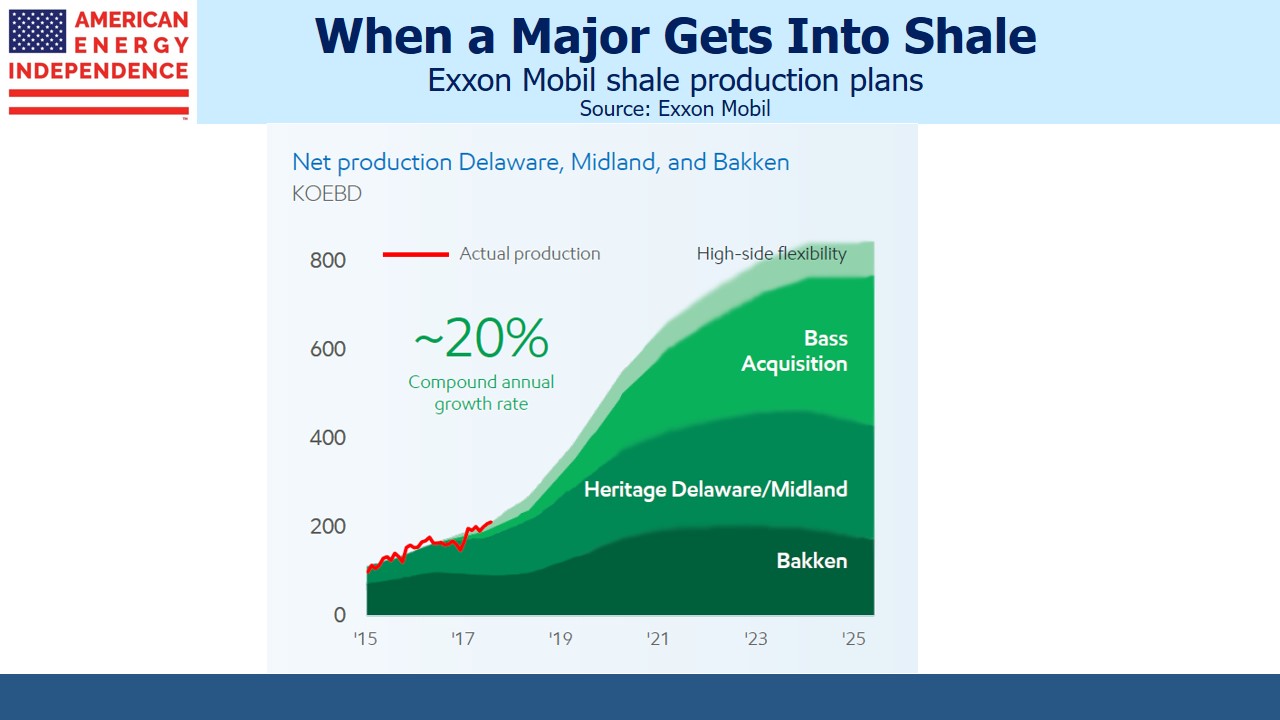 Betting on higher crude has been a losing trade for hedge funds until recently (see WSJ: As Oil Soars, Few Hedge Funds Are Left to Profit), reflecting conventional wisdom that shale supply will act to rein in higher prices. By contrast, we think crude prices will trend higher over the medium term because of underinvestment in conventional supply. Shale investors should regard growing EV adoption as fundamentally supportive.