What’s Next For Tellurian?

Tellurian (TELL) CEO Charif Souki is one of the more colorful executives in the energy sector. In his book The Frackers, WSJ journalist Gregory Zuckerman memorably chronicles his career from a “shaggy-haired Lebanese immigrant” who spent seven years in Aspen where he “skied and bummed around” to founding Cheniere, today’s leading exporter of US Liquefied Natural Gas (LNG).

In 2016 Souki founded Tellurian, planning to develop a greenfield LNG export terminal (Driftwood). It was to be the next Cheniere. He assembled a team of former colleagues and set about designing the facility and signing contracts for construction and LNG shipments. Rounding up enough customers who will commit to long-term Sale and Purchase Agreements (SPAs) is necessary to obtain financing and reach Final Investment Decision (FID). It’s how all these projects progress. There’s no alternate use for an LNG facility, so twenty year contracts are the norm.

Today Souki’s weekly videos draw several thousand views on Youtube. Sycophantic comments are posted by true believers. It always seemed TELL was one SPA away from FID on Driftwood. Souki is the rare CEO who offers a regular public perspective on his business.

In a recent video Souki conceded to “tactical errors” which explain TELL’s slumping stock price. Convinced that the spread between foreign natural gas benchmarks and the US represents a long-term profit opportunity, TELL sought to retain the price risk in the SPAs they negotiated. Cheniere and most other exporters charge a liquefaction fee and seek to avoid exposure to commodity prices. This creates more stable, visible cashflows which lowers their cost of capital.

As Cheniere has shown, they still retain price risk on some contracts which has allowed them to raise their EBITDA guidance three times this year. TELL’s approach offers more upside if differentials remain wide, but the higher risk profile has made investors wary. Large pricing discrepancies have a way of self-correcting. The US is likely to attract manufacturing from Europe because of our cheaper energy, which may push domestic natural gas prices higher and European ones lower.

In August 2021 TELL raised $100 million in a secondary offering at $3 per share, a 25% discount to the prevailing price. Later that year they paid $8 million in cash incentive compensation to senior executives. Once again betraying his risk appetite, Souki publicly contemplated using the balance of the proceeds to help acquire an upstream natural gas E&P company. Although this type of vertical integration made sense with their desire to retain natural gas price risk, TELL should have been positioning itself as the seller not buyer in such a transaction.

Since then TELL has visibly struggled to obtain the financing necessary to build Driftwood. Russia’s invasion of Ukraine provided a boost to the US LNG sector, and Souki must have salivated at the huge prices European buyers have paid for LNG shipments. In March TELL announced construction of Driftwood had begun, in an attempt to create a sense of inevitability around their plans and draw investors in. 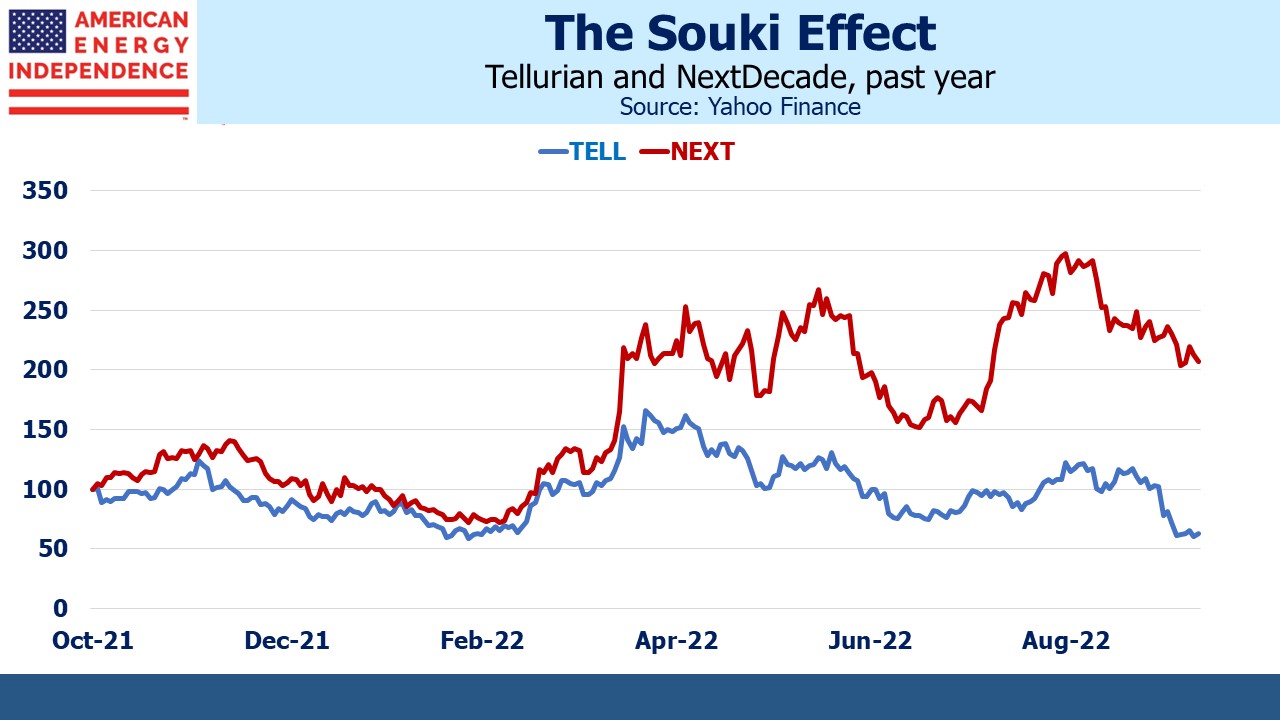 Falling stock and bond markets have reduced risk appetites. Last month TELL pulled a bond offering, presumably because the yield investors required was too high. In his recent video, Souki acknowledged that retaining price exposure to natural gas had been a mistake. They recently let two SPAs lapse. There is no longer any clear timeframe for FID on Driftwood.

Souki is used to adversity. Cheniere was originally planning to import LNG to compensate for falling domestic production. The Shale Revolution turned this calculus upside down. Souki pivoted to developing an export business – a non-trivial change since regassifying LNG imports uses very different equipment than chilling natural gas and loading it onto LNG tankers.

In spite of this success, in 2015 Souki was forced out of Cheniere by Carl Icahn who objected to excessive compensation and Souki’s desire to create a marketing arm to trade natural gas. He soon founded Tellurian.

Last year Souki received total compensation of $20,182,005 according to TELL’s proxy statement. Even Kinder Morgan, not known for a parsimonious philosophy towards its senior executives, restrained themselves to $18 million for CEO Steve Kean. There aren’t many analogous LNG start-up companies – NextDecade (NEXT) is the only true comparable. So TELL’s list of peers for compensation consists of profitable companies whose operations are generating positive cash flow, not something TELL can currently boast.

Charif Souki’s problem, identified by Carl Icahn back in 2015 when he was on Cheniere’s board of directors, is that he likes pay for performance in advance.

Stock prices for TELL and NEXT were approximately tracking each other through Russia’s invasion in February which boosted both. But in recent months TELL has slumped as investors tired of the promised financing to reach FID on Driftwood. Meanwhile NEXT has pushed ahead with signing SPAs, and we think they will reach FID on two, possibly three “trains” to deliver LNG to awaiting tankers by the end of this year. Of the two, NEXT now seems much more likely to execute their plan.

Souki offered his mea culpa on Youtube which was forthright of him even if he didn’t offer to return some of his already advanced performance-based compensation.

The lesson here is that investing alongside Charif Souki may work out – it did at Cheniere. But it always works out for Souki. Expect to see repriced stock option awards as a necessary step to keep him motivated. Whatever comes next for TELL, we think NEXT is a better run company.