Once again a corporate executive team has demonstrated childlike innocence when dealing with the hard-nosed providers of equity capital. Tetra Technologies (TTI) is the latest firm to combine a good business with a clueless approach to funding it. TTI supports the oil and gas industry, providing a wide array of products and services including fluids, compression equipment, well-testing and decommissioning. They are as much part of the Shale Revolution as the E&P companies that drill for oil and natural gas.

TTI decided they needed some additional equity capital as they were in danger of violating one of their debt covenants. On December 8th they issued a press release noting that the company was “…considering capital raise alternatives  to strengthen its balance sheet.” They blamed potential weakness in 2017 Gulf of Mexico activity along with the delay of certain projects from 4Q16 into early next year.

The phrase “capital raise alternatives” clearly includes more than one type of capital, and strongly suggests that the simplest form, a public equity offering, was not the most likely outcome. A reasonable guess would have been a private placement of some type of preferred security convertible into common. TTI stock duly fell as investors digested both the slowdown in revenues from certain projects and the likelihood of some additional equity dilution. 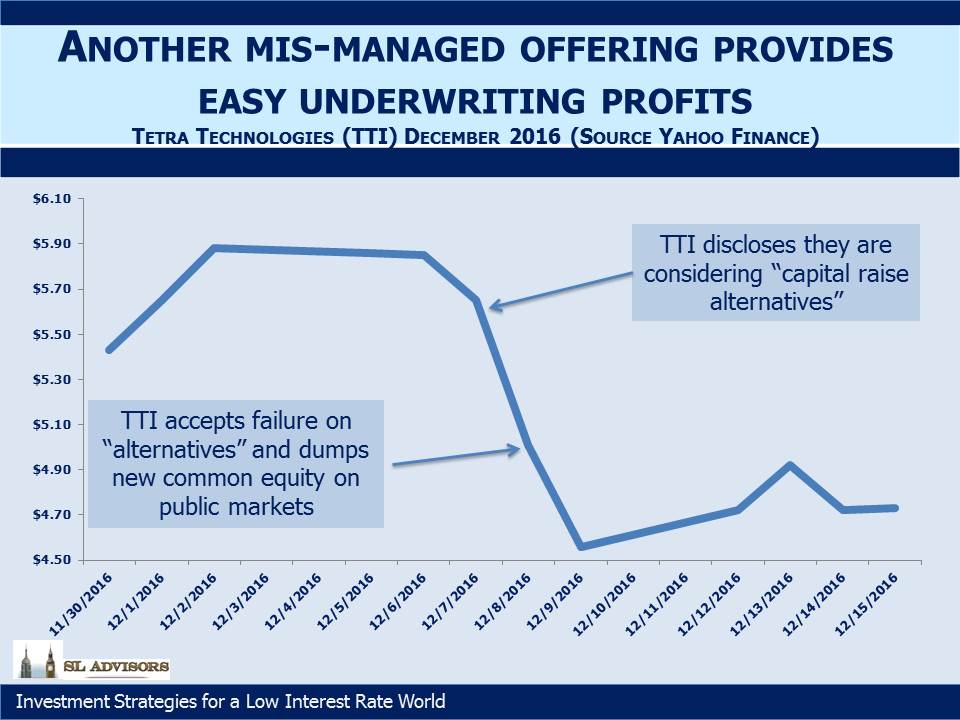 On December 9th, TTI then surprised the market by announcing a generously priced secondary offering of common equity. The 19.4 million shares (expected to be upsized to 21 million) along with 10.5 million warrants represented a substantial 33% increase of the share count, a hefty dilution for existing shareholders.

TTI’s poor handling of the offering weakened their stock price, requiring the issuance of more shares than was otherwise necessary in order to raise the desired amount of capital. To see how this is so, consider the two announcements they made twenty four hours apart.

Their first press release, on December 8th, was pointless unless they had secured capital in some form. Companies don’t have to disclose that they might raise capital. A company is always interested in raising capital if the terms are attractive. Most likely TTI believed they were sufficiently close on agreeing terms that the desired “capital raise alternatives” were pretty much done. Their stock price fell on the news.

Consequently, the announcement of a public offering the following day communicated that the presumed private capital raise implied in the prior release had fallen through. In fact, it’s highly likely that the potential investors watched TTI stock plummet after the first anouncement, and concluded that they needed more generous terms. The price of TTI now had to reflect that private equity investors had considered an investment and passed.

There was no point in the first press release. All it did was to weaken their negotiating position and eventually force them into a dilutive public offering. CEO Stuart Brightman was paid $2MM last year but only has around $3MM in TTI stock, so the market’s response to his poor handling of the capital raise didn’t cost him very much personally.

Wall Street underwriters (in this case JPMorgan and Wells Fargo) are blessed to have such incompetent clients. It makes their jobs much easier.