Fed chair Jay Powell and the American worker do not have an alignment of interests. In his remarks, following another 0.75% rate hike, Powell said the FOMC is, “acutely aware that high inflation imposes significant hardship as it erodes purchasing power, especially for those least able to meet the higher costs of essentials like food, housing, and transportation.” He always says that, so as to remind that some must sacrifice their jobs due to the Fed’s pursuit of higher unemployment. This will cool the labor market, and inflation, for the rest of us.

The Fed’s inability to engineer a million or two lost jobs renders Powell’s warnings anodyne, because so far the tightening cycle hasn’t claimed any casualties. Reducing inflation requires taming wage growth. The US Employment Cost Index (ECI) for all civilian workers is increasing at 5.0%, the highest since 1984.

This is marginally below the Personal Consumption Expenditures (PCE) deflator which is increasing at 6.2%. For now, the American worker is accepting a 1% drop in real purchasing power. It probably feels worse. CPI inflation is 8.2%. PCE is a more accurate measure because its weights update dynamically, but CPI is more widely used, including for the social security cost of living adjustment which will be 8.7% next year. 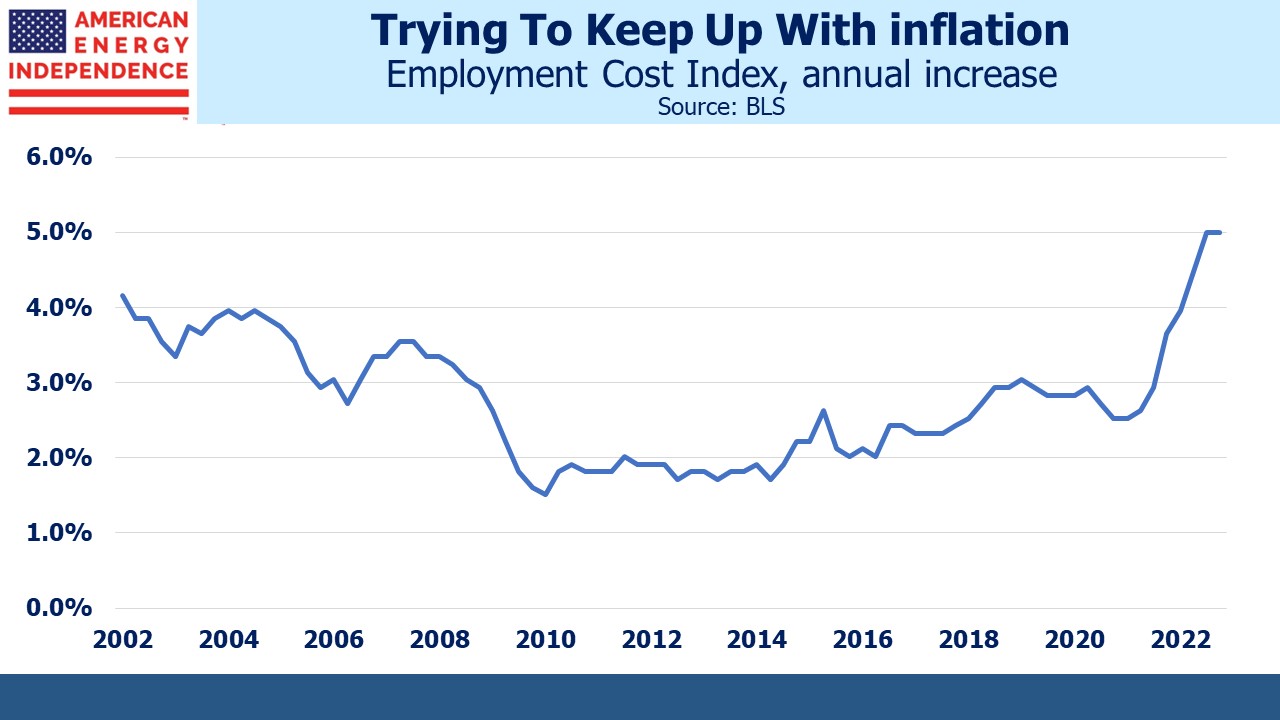 It’s unclear why anyone should accept a pay raise below inflation. Why should firefighters, teachers or indeed any worker whose annual income doesn’t include a healthy dose of variable compensation accept reduced purchasing power? Workers didn’t cause inflation. Supply disruptions due to Covid lockdowns, the excessive $1.9TN Democrat stimulus early last year and the Fed’s ponderous restoration of monetary normalcy all played a part. Action and inaction by government agencies are to blame, with reduced real living standards the result. The White House hasn’t articulated the case for restraint in pay negotiations. It’s not an easy one to make. But as long as pay raises are running at 5%, restoring the Fed’s 2% inflation target will be hard.

Powell noted that, “the labor market remains extremely tight, with the unemployment rate at a 50-year low, job vacancies still very high, and wage growth elevated.” This empowers union negotiators to demand more, and they are.

San Antonio is raising pay for city workers by around 7%, although some will receive raises of up to 20%.

Teachers in many states across the country are receiving their biggest raise in decades. For example, in New Mexico base salaries are going up by 20%.

Railroad workers are threatening to strike, even though the Presidential Emergency Board, which is trying to mediate between the union and the railroad companies, recommended a 24% increase over the next two years.

Europe, as is often the case, is worse. Workers on London’s subway system (“the tube”) have scheduled a series of strikes over a 3% proposed pay raise and pension cuts. Transport For London, which oversees the city’s public transport, sent out an email one day last week that breezily reminded that there are “lots of public transport options” if you have weekend travel plans but went on to warn of “some planned strikes taking place.”

In France, demonstrators have clashed with police as they protest about inflation.

It’s easy to understand why workers left worse off by rising prices are fighting back. The US job market remains very tight. Unless you work at Twitter, it’s reasonable to expect your pay to at least keep up with the general price level. Unions are negotiating higher pay on behalf of their members. But employers are also often having to raise salaries to compete.

This is making it harder for the Fed to bring inflation back down. Unless inflation starts to fall rapidly and soon, it’s likely to strengthen the conviction of workers determined to maintain living standards.

The Fed needs job market softness now, in order to temper the trend towards higher wage increases. Jay Powell has been equivocal in his warnings, but on Wednesday he allowed that, “we may ultimately move to higher levels than we thought at the time of the September meeting.” When asked about the window for a soft landing, he said, “I would say the path has narrowed over the course of the last year.”

While it’s impossible to be confident about the rate cycle peak, continued low inflation expectations present the Fed an ever-present exit ramp. But for now, rates look set to keep rising. Friday’s strong employment report didn’t help. The dynamics of wage negotiations are adding to upside risk for rates.