On Monday the Energy Information Administration (EIA) announced that 27.3 Gigawatts (GW) of natural gas power plants will be added to the US fleet over the next three years, representing a 6% increase from current capacity. The US is blessed with abundant supplies of natural gas, sufficient to power the country for many decades.

Many US states are pursuing sensible energy policies designed to maintain reliability and affordability, as well as diminish our reliance on coal. The map below shows where these power plants are being added – generally close to existing natural gas supplies. New York state is conspicuously not taking advantage of this opportunity, since its energy agenda has been hijacked by progressives. 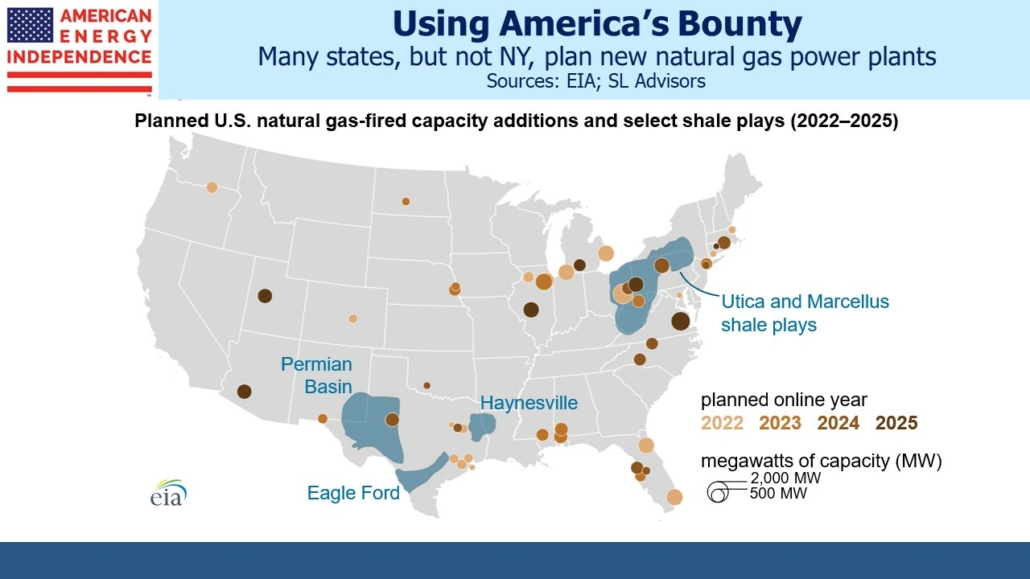 The COP26 in Glasglow revealed the divide we’ve often chronicled between OECD countries who want lower CO2 emissions and emerging economies that are focused on raising living standards, which requires more energy. The inability of COP26 to produce anything meaningful exposed the ambivalence of countries like the US to an overly rapid energy transition. Higher crude oil has brought solicitations to OPEC to increase supply and now sales from the Strategic Petroleum Reserve (SPR).

The first failure of climate extremists is their inability to convince consumers that they should give up reliable fossil fuels and opt for higher-priced intermittency.

The most important development this year in US power generation is the resurgence of coal demand at the expense of natural gas. After several years of losing market share, domestic demand for coal has rebounded because of improved relative pricing. 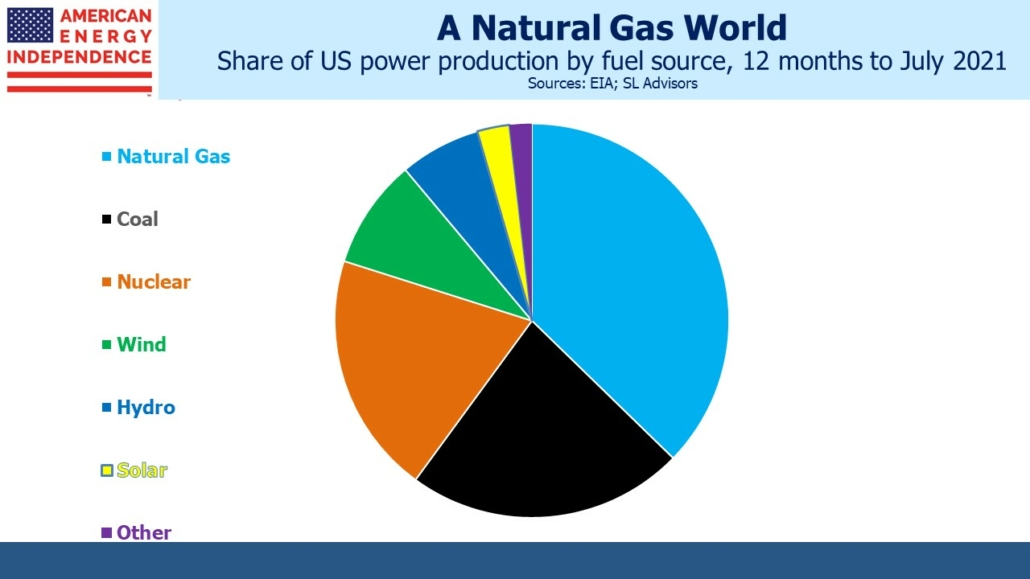 US natural gas for January ‘22 delivery touched $6.50 per Million BTUs (MMBTU) a month ago, before retreating to its current level of around $5. US consumers are not immune to the policy errors in other countries (see Why The Energy Crisis Will Force More Realism) but are thankfully being spared from the type of Greta-inspired outcomes endured in the UK (see U.K. Power Prices Soar Above £2,000 on Low Winds). The new natural gas power plants noted by the EIA are an example.

By contrast, nothing newsworthy is happening with US solar and wind. They continue to grow — since January 2018 solar’s market share of US power generation has increased from 1.2% to 2.2%, and windmills have gone from 6.0% to 7.5%. 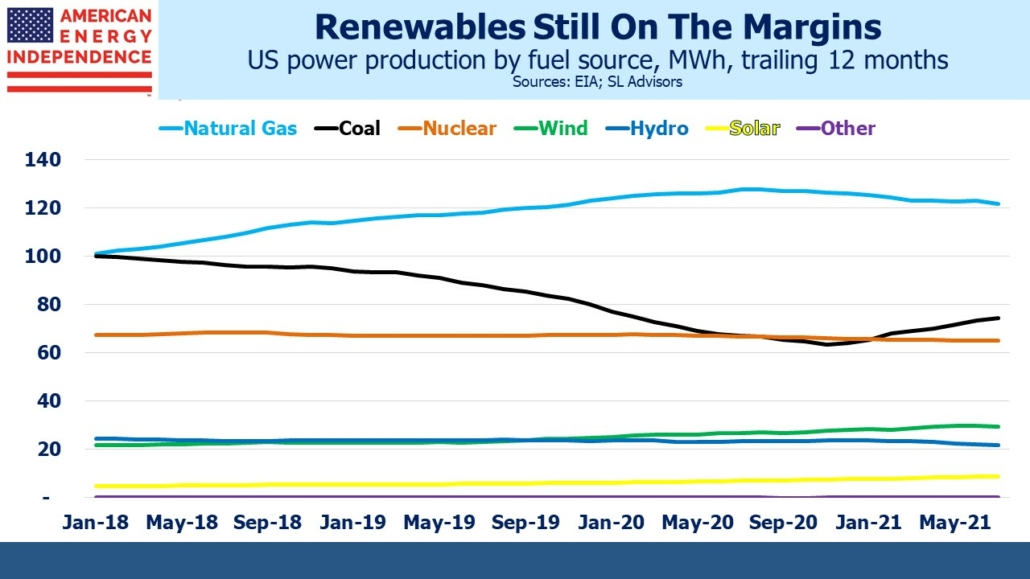 It’s possible to create some impressive numbers from this – solar output has a Compound Annual Growth Rate (CAGR) of 20% since January 2018, and wind has 9%. But as the charts show, if both disappeared tomorrow, we mostly wouldn’t notice. Coal use is up 12% in the past year, and currently generates almost twice the power of solar and wind combined. Vaclav Smil has shown that energy transitions play out over decades. Renewables will be small with a high CAGR for many years to come.

US energy-related CO2 emissions are forecast to be +7% this year – not just because energy consumption is rebounding from covid-depressed levels, but also because of this adverse fuel mix. Next year is forecast to be +1%, in part due to a shift back towards natural gas by utilities.

This leads to the second failure of climate extremists – their refusal to differentiate among fossil fuels has impeded their effectiveness. Had they pushed public policies that encouraged utilities to switch from coal to natural gas, perhaps with a carbon tax, the trend towards natgas would have continued this year and CO2 emissions wouldn’t have jumped as much. Instead, their purist approach has left market forces through cheap natural gas to drive most of the reduction in CO2 emissions the US has achieved. 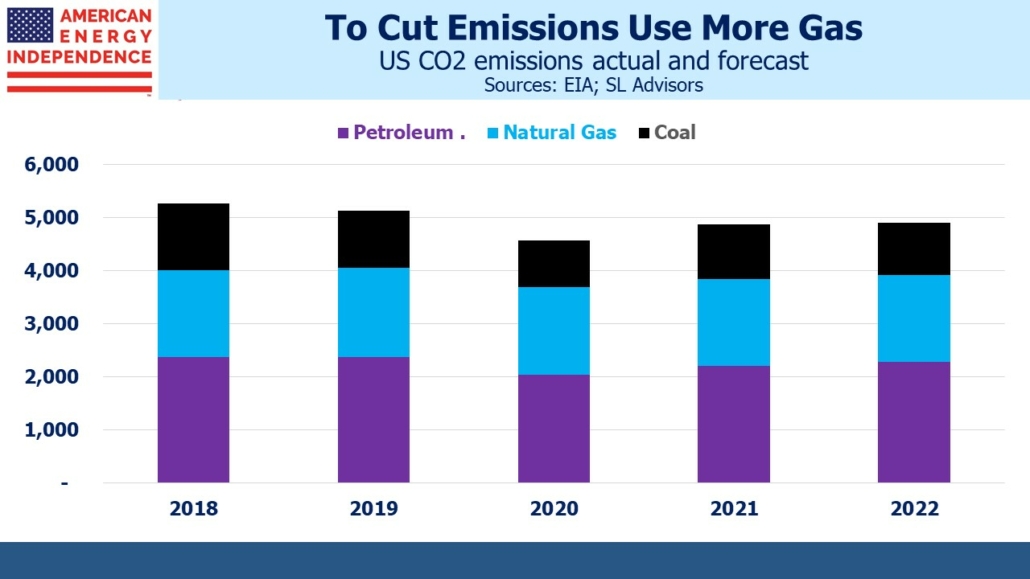 The US even declined to join 40 other countries in pledging to phase out coal within two decades. This puts us alongside China, the world’s biggest emitter and consumer of half the world’s coal.

American voters want to reduce emissions as long as it doesn’t lead to higher energy prices. Administration efforts to jawbone crude oil prices lower reflect that reality. High gasoline prices should incentivize switching to electric vehicles (which are more likely to rely on natural gas power plants than any other fuel). Instead, the White House is trying to diminish this incentive with sales from the SPR. Foregoing the coal pledge is another example of pragmatism over-ruling progressives.

Pragmatic policies in many states and the White House’s incoherent energy strategy are helping us avoid the poor planning of the UK, Germany and California. Many states such as Florida are adding natural gas capacity in order to preserve reliability. It’s one more reason why migrants from New York state with its poorly conceived energy policies will continue to move to the sunshine state.

Join us on Thursday, December 16th at 12 noon Eastern for a webinar where we’ll provide an update on the midstream sector during rising inflation.