Their inclusion is entirely appropriate. The International Energy Agency recently announced that global CO2 emissions last year were flat, at 33 gigatonnes (a gigatonne is 1 billion metric tonnes). The U.S. lowered emissions more than any country – by 140 million tonnes, a 2.9% reduction.

Increased use of natural gas was an important contributor, because it’s substituting for far dirtier coal. In 2018, using the most recent figures available, natural gas produced 35% of America’s electricity, versus 27.5% for coal. Wind was 6.5% and solar 1.5%.

Other developed countries also saw reduced emissions. The EU saw a drop of 160 million tonnes, and Japan 45 million tonnes. The U.S. not only had the biggest absolute reduction, but on these figures also the biggest per capita drop: 0.42 tonnes per American, versus 0.31 tonnes per EU citizen and 0.35 tonnes per Japanese citizen.

The U.S. Shale Revolution has made this possible. Natural gas prices may be ruinously low for E&P companies, but this has enhanced its competitiveness all around the world. 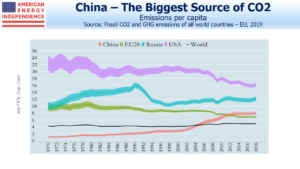 One of the most damning statistics is that China’s annual per person CO2 emissions of 9 tonnes per annum are higher than the EU at 8 tonnes. India is at 2 tonnes.

The U.S. is at 16 tonnes, but this has been falling sharply over the past couple of decades.

China’s relatively high per person emissions are partly a result of their mix of inputs – they burn half the world’s coal. While developed countries are managing to lower emissions, China is undoing most of the benefit. Given their track record, rising Chinese living standards will represent a significant setback to global efforts on emissions – an issue rarely acknowledged by climate extremists.

Meanwhile, U.S. pipeline corporations are helping reduce America’s emissions, drawing ESG-dedicated capital from Blackrock and others. It’s one of the biggest successes in climate change