For almost my entire 38 year career in Finance, we’ve worried about the U.S. Federal deficit. Someone recently asked me if we should still be worried. You’d think that it should have been a problem by now, but it’s not. Thirty year treasury bonds yielding 3% don’t look enticing, but evidently a lot of investors feel differently. Low as they are, U.S. yields are substantially higher than Germany, whose 30 year bonds yield a paltry 0.73%. 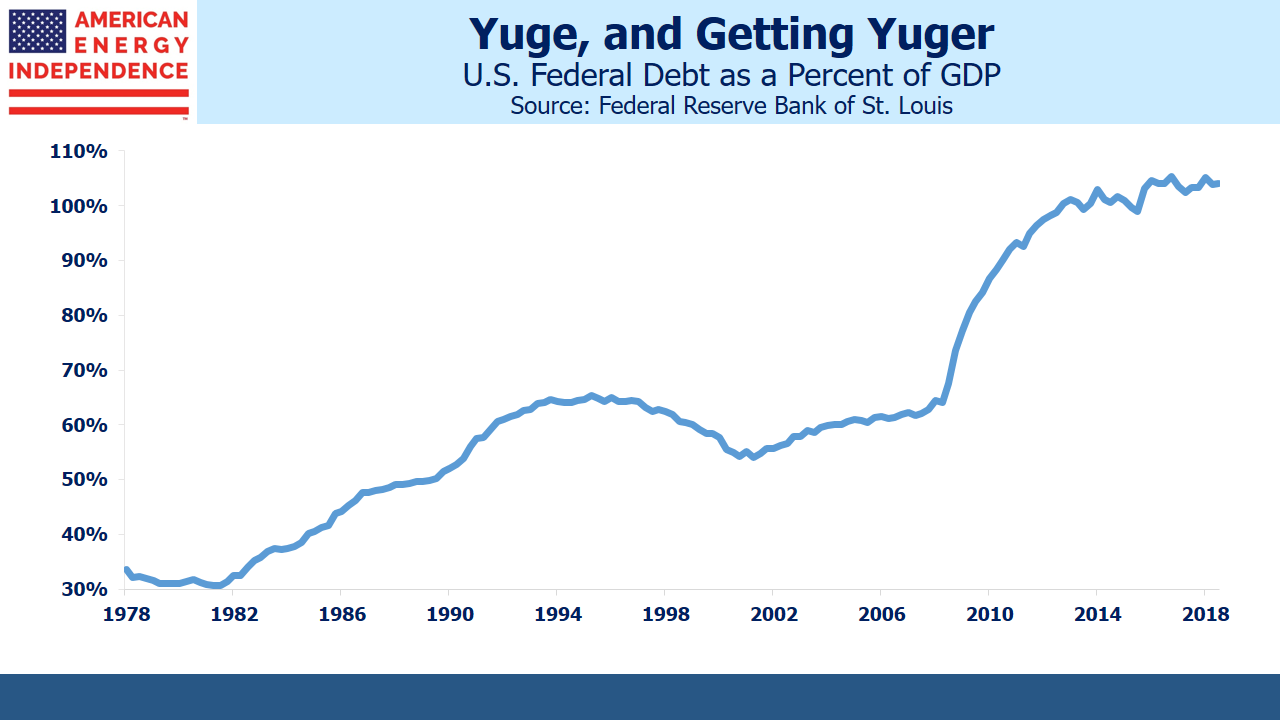 U.S. publicly-held Federal debt to GDP rose sharply following the 2008 financial crisis. Circumstances justified a temporary spike to provide fiscal stimulus, but instead it’s continued to grow. Nonetheless, rates just can’t rise — even though the Fed has stopped buying bonds, others have stepped in. Short term rates might even have peaked, following Fed chairman Jay Powell’s communication missteps in December.

The deficit doesn’t seem to matter. As President Reagan joked, “I am not worried about the deficit. It is big enough to take care of itself.”

This view is easily criticized as needlessly reckless with our country’s future. Markets are forward-looking, and most observers are pessimistic about our long-term fiscal outlook. But yields don’t reflect that. Since our current indebtedness is clearly manageable, it’s worth considering alternative outcomes.

Excessive debt was part of the reason for the 2008 crash. As the economy recovered, the U.S. pursued a stealth devaluation by maintaining negative real interest rates. It’s a well-worn path, and while Ben Bernanke didn’t articulate it as such, treasury yields were so low that buyers suffered a loss of purchasing power after taxes and inflation. Even today there’s hardly any return, although a large proportion of the holders aren’t taxable.

Populism adds an interesting dimension. Let’s suppose that U.S. bond yields rise to more fully reflect the sorry state of fiscal policy. Increased interest expense crowds out other expenditure. The Congressional Budget Office forecasts that net interest expense will double by 2024 and almost triple by 2029. They assume ten year yields rise to around 3.7%. The U.S. Debt Clock has some interesting figures.

If the buyers of our debt demand higher rates as compensation for the outlook, interest expense will rise even more. This will crowd out other priorities and add further to the deficit. Stocks would weaken; growth would slow. We can all imagine how a populist-leaning president, like Trump, would respond. Rather than focus on cutting domestic spending, foreign buyers would be warned to keep investing. The U.S. might threaten a withholding tax on foreign holdings of our debt, effectively lowering the rate. It would constitute a default. Who seriously thinks Trump would blink at the prospect?

It needn’t be a Republican. Early Democrat presidential contenders are similarly populist. How would a president in the mold of AOC (gulp) react to foreign creditors slowing the Green New Deal’s hugely expensive re-engineering of America’s economy?

The moral requirement to repay debt has been steadily weakening for years. Federal debt represents an obligation passed down from one generation to the next. It’s easy to see the political appeal in questioning why the country should repay money that was spent on entitlements by a cohort long gone. The bond buyers should have known better. In 2013, in Bonds Are Not Forever; The Crisis Facing Fixed Income Investors, I expanded on this line of thinking. It’s no less relevant today.

Such problems are in the future, but should be well within the time frame of a thirty year bond investor. Today’s yield curve suggests they’re not worried at the prospect. They should be. Publicly held U.S. Federal debt is $16TN. Another $6TN is owed to other agencies, half of which is Social Security. When you owe $16TN it’s their problem too.