On Monday, President Trump asked, “Why are we protecting the shipping lanes for other countries (many years) for zero compensation?” 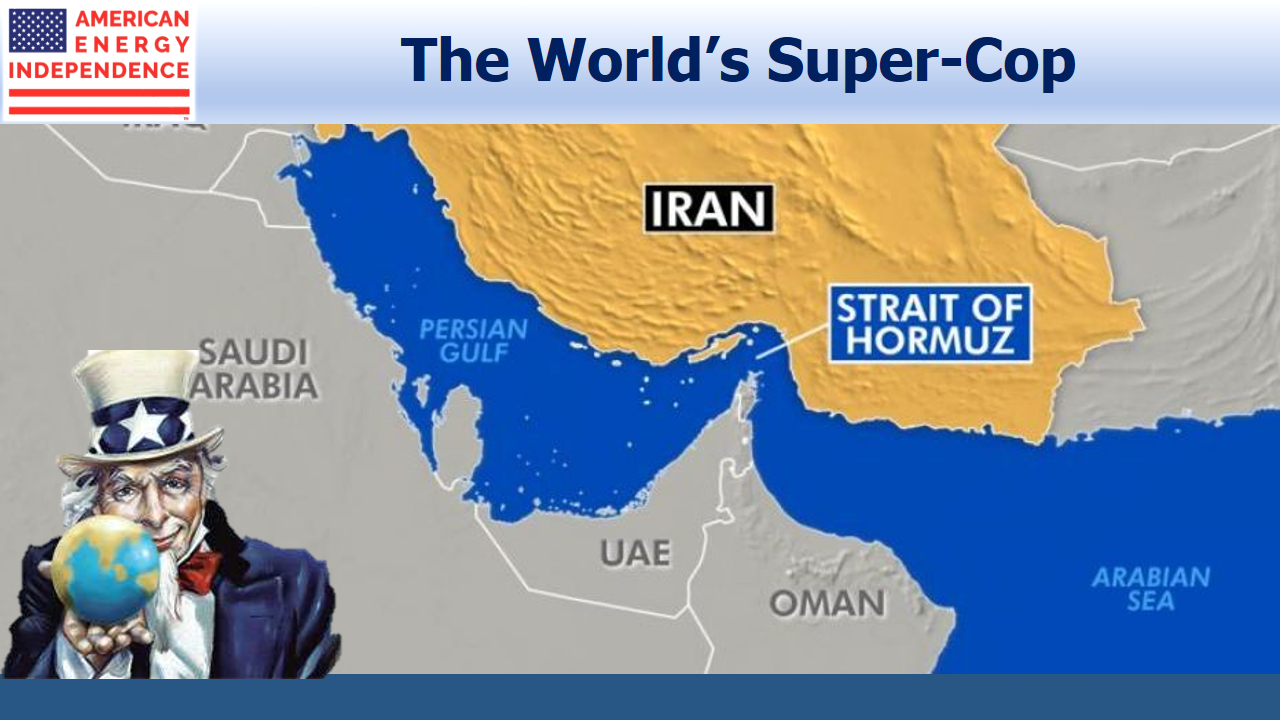 Few American voters give much thought to the U.S. Navy’s role in ensuring safe passage for seaborne trade around the world. This interactive map, although seven years old, provides a fascinating picture of the volume and location of merchant ships. Choke points such as the Straits of Hormuz look like commuters at the Times Square subway station.

The U.S. has protected shipping lanes for decades, picking up from the British Navy’s historical role. The world benefits from free trade, but America bears more of the cost of security than any other country, and perhaps most of it. American taxpayers who considered the issue would likely seek some burden-sharing. Trump’s supporters and critics alike can agree that when he asks simple questions like this, he understands the prevailing mood of the electorate.

It reminded me of Paul Kennedy’s 1987 book, The Rise and Fall of the Great Powers; Economic Change and Military Conflict from 1500 to 2000. Kennedy chronicled the challenges faced by the Spanish, French and British empires as they successively succumbed to “imperial overstretch.” This is the inability of any great nation to support sufficient military power to retain control of its conquered territory. Kennedy’s central premise that Japan was about to surpass the U.S. was spectacularly wrong, but his concept of imperial lifecycles is provocative.

The U.S. does not occupy foreign countries. There is no American empire analogous to the historical versions. But the U.S. leads an empire of culture, values and economic liberalism. Soft power, along with hard.

Military power flows from GDP, and in 1945 America’s share of the global economy was at its peak. Today, China and India enjoy faster economic growth which inexorably diminishes America’s share of world GDP. In time, relative military strength must reflect this, and the U.S. will once again contend with a multi-power world. Today, the U.S. defense budget is more than 2X China and as much as the next seven countries combined. Military dominance is not in doubt.

But Trump’s comments reflect an isolationism that questions the need to be the world’s police force. It’s a rational adaptation to a world in which many U.S. allies have prospered under security provided and funded by the U.S. Enough already.

The seductive simplicity of problem-solving by tweet glosses over complexity. Trump’s comments were likely prompted as he cancelled a planned military strike on Iran and wondered why the U.S. was in the Persian Gulf in the first place. The two stricken tankers were from Japan and Norway. The lost U.S. drone was patrolling the area. Is it really our job? Chinese warships aren’t about to start patrols there, but Trump’s sentiments were valid.

Here’s where the Shale Revolution provides geopolitical flexibility. The U.S. is on the verge of becoming a net exporter of crude and petroleum products.  For decades, we’ve maintained a significant military presence in the Middle East and fought two wars there in part to assure the world’s continued access to crude oil. Without this resource, the region would be governed like Somalia and we wouldn’t care.

U.S. energy independence affords geopolitical flexibility. This includes the freedom to be more selective about our military commitments. It reduces our vulnerability to supply disruptions. It lowers our exposure to Paul Kennedy’s imperial overstretch. America’s energy renaissance has many benefits. Add to that list increasing burden sharing among other countries in providing global security.