Last week Kelcy Warren, CEO of Energy Transfer (ET), defended the MLP structure. He’s definitely correct that MLPs possess a powerful tax advantage over corporations, in that their profits are only taxed at the investor level. Tax-deferred income free of the double-taxation to which corporate profits are subject is very appealing, and for years it drew countless buyers. Unfortunately, Warren is part of the reason that the MLP structure is losing favor. Midstream energy infrastructure and MLPs used to be synonymous, but widespread distribution cuts and investor abuse have left the old, rich Americans who used to be the investor base betrayed.  The names Kelcy Warren and Rich Kinder still elicit strong reactions from longtime MLP investors.

The Alerian MLP ETF, a good proxy for how MLPs have performed, has cut its distribution by 34% since the market peak in 2014. Companies chose to finance growth projects in excess of free cash flow, and ultimately resorted to either outright distribution cuts or “backdoor” distribution cuts by merging with a their lower yielding corporate general partner. Many MLPs abandoned the structure, and income seeking investors in turn have abandoned the remaining ones. 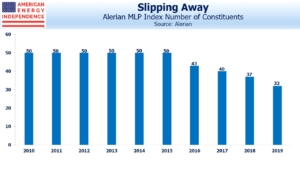 The result today is that MLPs represent 36.5% of the sector by market capitalization, as defined by the Alerian Midstream Energy Index — AMNA (see MLPs No Longer Represent Pipelines). Kinder Morgan, ONEOK, Enbridge, Targa Resoures and Williams Companies are among those that have fully adopted the corporate structure.

MLP-dedicated mutual funds and ETFs were originally designed to offer sector exposure to retail investors who didn’t want to deal with K-1s. They saddled their investors with a ruinous tax burden, because funds with over 25% of their portfolios in partnerships (which is what MLPs are) have to pay corporate tax. It seems odd to take a tax-efficient vehicle and add taxes to it, but showing how few investors read the fine print, these products took hold. And they’re now focused on just 36.5% of the sector (see Are MLPs Going Away?).

To illustrate how much things have changed, just two names, Energy Transfer and Enterprise Products, represent 43% of the market cap of all MLPs.  Dedicated MLP funds are forced to drastically underweight these two, which leaves them with outsized exposure to the smaller MLPs. They’ve moved a long way from diversified portfolios of large, fully integrated “toll road” pipeline systems that originally attracted investors.

The biggest of them, the Alerian MLP ETF, has since inception delivered less than one third of its index. This is probably the worst performing index ETF in history. Corporate taxes have taken a bite, and when the sector delivers a couple of big years the tax hit will be even more noticeable (see MLP Funds Made for Uncle Sam). The 1.04% since inception annual return is not far from the 0.85% advisory fee, putting AMLP in the company of the hedge fund industry in making profits while the clients don’t.

If you ever meet one of the hapless souls who’s chosen AMLP, you’ll find they’re probably unaware of the tax drag.

The shrinking number of MLPs has rendered MLP-dedicated funds less representative of the sector. Of the ten biggest North American pipeline companies, six are corporations and so excluded from AMLP and its cousins. Every time another pipeline company leaves the publicly-traded MLP universe, these funds are left with fewer names and a preponderance of small ones. The market has shifted since many of these were launched a decade or more ago (see AMLP’s Shrinking Investor Base). 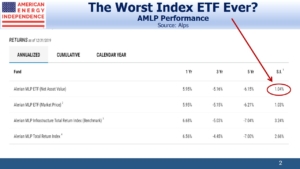 If any of these funds decides to reduce their MLP exposure below the 25% threshold, so as to be more representative and avoid corporate taxes, it’ll depress MLP prices because many will have to sell three quarters of their holdings. A quarter of the $135BN in public float for all MLPs is held by $34BN in MLP dedicated-funds. It’s a crowded space.

Moreover, AMLP reflects the worst of MLPs – AMNA is 21% Gathering and Processing (G&P), the more risky end of the midstream business because it’s more dependent on production from specific areas. Due to limited choices, AMLP has 26% exposure to G&P. Even worse, natural gas pipelines are a big underweight in AMLP, even though the long term prospects for natural gas are more visibly positive than for crude oil and liquids. Natural gas pipelines represent 46% of AMNA, but only 27% of AMLP. So AMLP investors have an overweight towards crude oil and liquids.

Investors are starting to act on the many flaws of MLP-dedicated funds. Over the past year, $4.1BN has left the sector. The American Energy Independence Index is investible (you cannot invest directly in an index) and has weights that are more reflective of the industry. Its holdings are mostly corporations, which reflects today’s pipeline business. Several names are ESG holdings for Blackrock and other big fund managers, but MLPs don’t pass ESG screens because of poor governance (watch ESG Investors Like Pipelines). The broader investor base and ESG qualities helped pipeline corporations outperform MLPs last year.

Disclosure: our affiliated investment products are structured to reflect the insights listed above.