A Few Thoughts on Long Term Energy Use

Every year Exxon Mobil publishes their outlook for global energy over the next 25 years. It’s an absorbing read for people who care about such things. Their projections may not all be right, but they have to think about such issues pretty carefully and make long term investment decision based in part on their views. In reading the latest edition: 2017 Outlook for Energy: A View to 2040, a few slides jumped out.

The U.S. Energy Information Agency (EIA) also just published their 2017 Annual Energy Outlook which includes projections out to 2040. Although these two reports are structured differently (Global versus U.S.; Exxon makes single case forecasts whereas EIA includes multiple scenarios) they are generally consistent. They agree on broad issues such as improving energy efficiency, more U.S. consumption of natural gas for electric power and industrial use, and gradually increasing crude oil production. The EIA forecasts the U.S. to be a net energy exporter within 5-10 years (depending on scenario), driven by sharply higher natural gas production displacing imports and leading to a net export position, and somewhat higher crude oil output reducing but not eliminating oil imports. 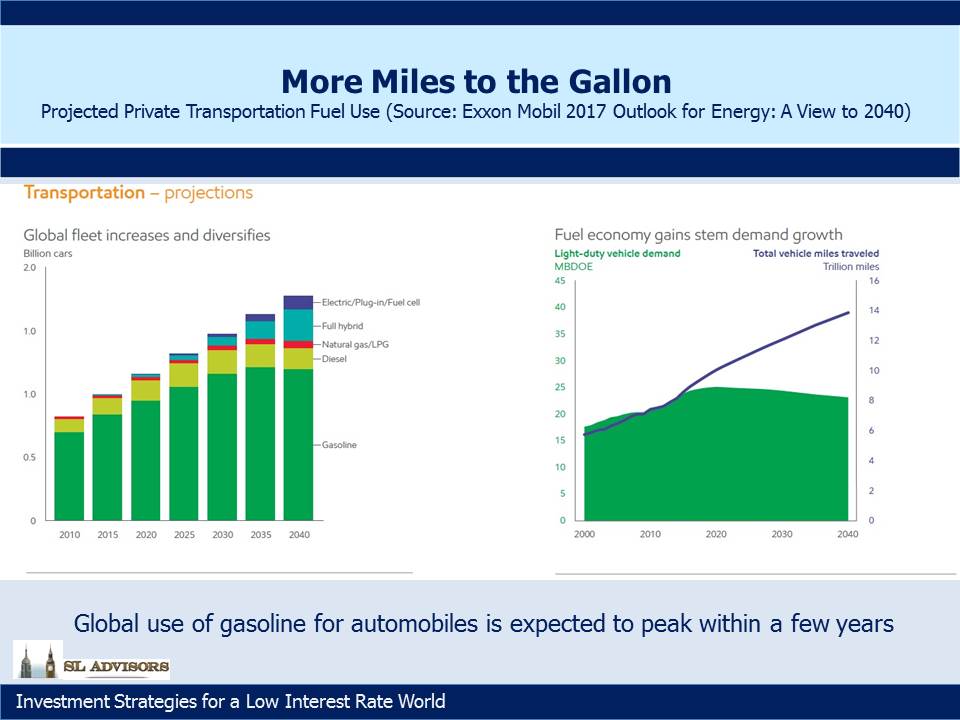 Although the world will drive more cars and many more miles thanks to demand in Asia, gasoline use for private automobiles is expected to peak within just a few years. Increasing use of electric and hybrid cars along with continued improvements in conventional engine fuel efficiency will more than offset more driving. China for example just announced plans to invest almost $400BN in renewable fuels by 2020. Although this is directed at reducing pollution from power generation, to the extent hybrid and electric cars gain market share in China they will use cleaner electricity. Based on today’s heavy reliance on coal for generating electricity, Chinese Tesla drivers have little to brag about. It’s also worth noting that the EIA in its Reference Case forecasts continued growth in U.S. exports of petroleum. This isn’t necessarily at odds with Exxon’s forecast of flat global gasoline use if U.S. refiners gain market share. 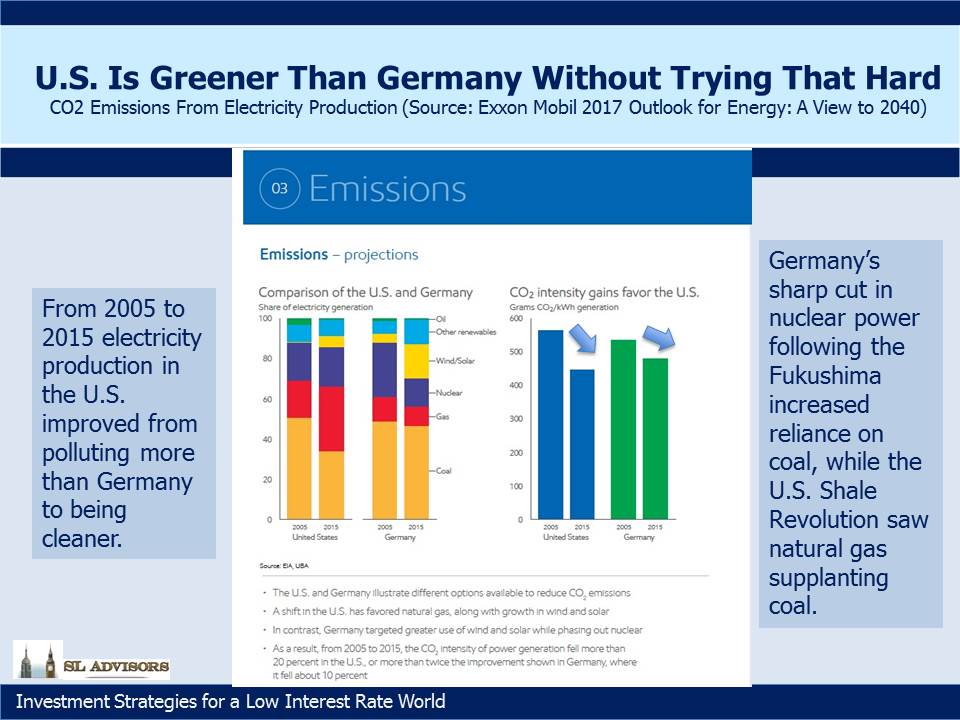 Germany has become a pioneer in the use of windpower, aided by many flat areas on which to build windmills as well as the very windy Baltic and North Seas. Germany sees itself as a leader in the use of renewable energy, a responsible global citizen limiting its contribution to global warming. And yet, few probably realize that the U.S. now generates electricity with less CO2 output than Germany. The improvement in the U.S. is due in large part to greater burning of natural gas instead of coal for electricity generation, a consequence of the Shale Revolution. Meanwhile, Germany’s green efforts have been harmed by its sharp reduction in nuclear power following the near meltdown of Japan’s Fukushima reactor in 2011. Renewables can only do so much, and as a result Germany’s use of coal has stayed higher than it might otherwise. Germans may not feel they need a lecture from Americans about saving the planet, but America can demonstrate better results. 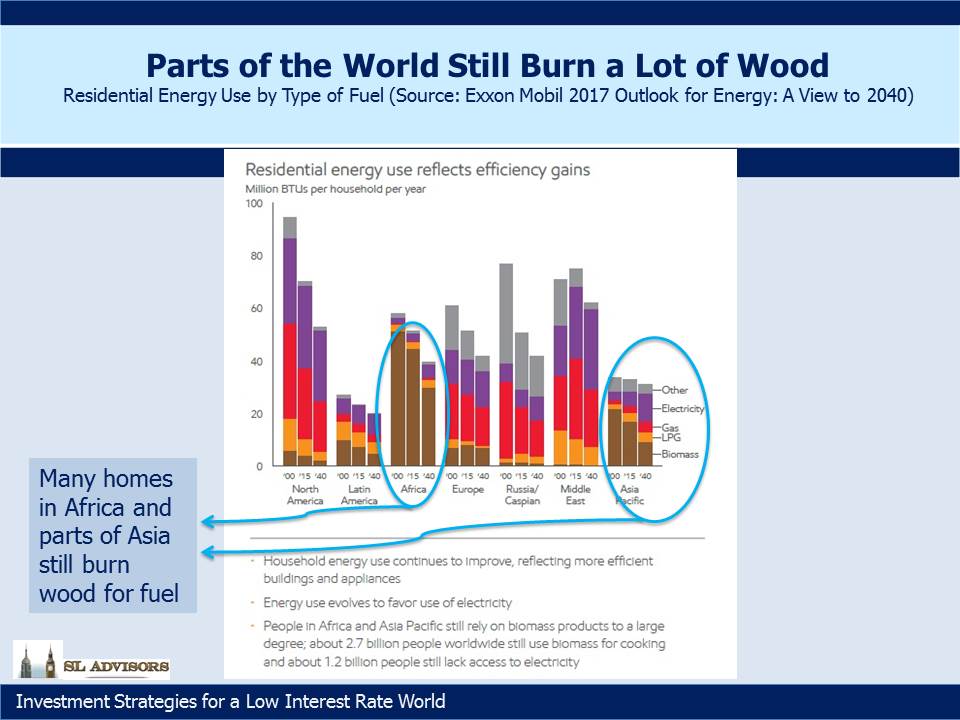 The third slide highlights the highly undeveloped use of energy in homes across Africa and parts of Asia. Biomass (wood, in different forms) may be renewable but it’s not especially clean burning for those in its immediate vicinity. A complete assessment of its environmental impact is complex and depends on how it’s harvested, the climate, what type of wood and the available alternatives. We just found it surprising to see how much of the world still relies on a relatively primitive source of energy. 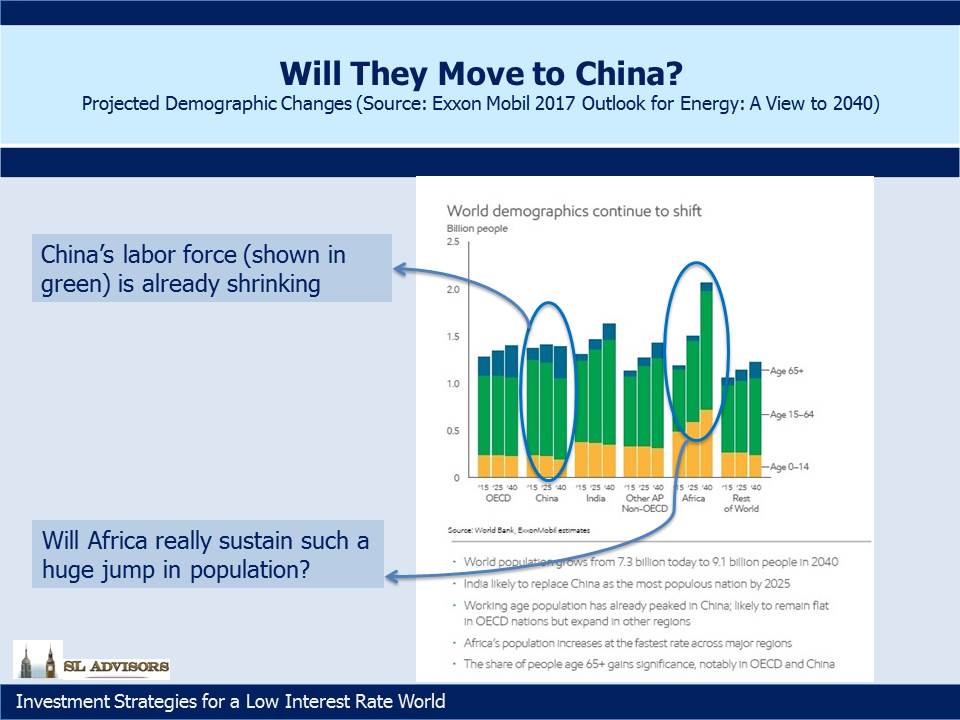 Finally, although demographics shift slowly, they’re still worth a look from time to time. China’s working age population is peaking around now. Since GDP growth comes from only three sources: (1) Labor force growth, (2) Productivity improvements and (3) Capital, Chinese GDP growth will need to come fully from the latter two now on. Developed economies are reckoned to be capable of 1-2% annual GDP growth before adding in the effect of labor force changes. Few are forecasting that China’s GDP growth will sink to this level, but it’s an interesting thought that ALL their growth will have to come from doing things better than before.

Meanwhile, Africa is forecast to add twice the population of North America in about a generation. Providing food, employment, housing and infrastructure for so many people is a challenge no region of the world has faced before.