The Uncertain Future of MLP-Dedicated Funds

In recent weeks there’s been growing discussion about the future of  MLPs (see Are MLPs Going Away?). Although the prospects for U.S. energy infrastructure are very good, the need for growth capital has exposed the limitations of the MLP investor base. Not everyone agrees. Stacey Morris of Alerian provided a thoughtful assessment (see Are MLPs Really Disappearing?), and concluded that MLPs would remain the dominant corporate form in the sector.

Two external factors weighing on sentiment have been tax reform and the FERC (Federal Energy Regulatory Commission) ruling. Tax reform’s impact was modest; a lower corporate tax rate reduces the competitive advantage of an MLP over a corporation, but the tax rate on recapture of income previously deferred was improved. The FERC ruling is potentially a long run problem for some businesses.

Although MLPs don’t pay tax, they had included taxes paid by their equity investors in calculating costs for certain contracts. It’s an odd concept, to include as an expense a cost you don’t incur, and a successful court challenge by United Airlines led to the change. The subsequent FERC announcement briefly led to a 10% drop in MLP prices on March 15th, highlighting confusion as well as the shallow conviction of some holders. While initially limited to certain interstate natural gas pipelines, it will in time also apply to other liquids lines. It’s narrow in scope but still a mild negative for a few names. It’s likely that the same assets held by a corporation rather than an MLP wouldn’t be as affected, which will cause some firms to consider changing their form of ownership.

We’re long-time MLP investors. While at JPMorgan, the private equity fund I ran seeded Alerian’s offshore MLP hedge fund in 2005. Tax-deferred, stable, high yields uncorrelated with commodity prices attracted many. The re-emergence of the U.S. as a significant energy producer changed that. Before the Shale Revolution, we consumed roughly the same quantities of energy from the same parts of the country every year. The need for new infrastructure was limited. Consequently, MLPs could pay out 90% or more of their Distributable Cash Flow (DCF) to the older, wealthy, K-1 tolerant investors who were the main buyers.

This financing model wasn’t able to support the need for growth capital to connect new sources of oil and gas with customers: crude oil from North Dakota; natural gas from Pennsylvania and Ohio; sharply increasing volumes of crude from the Permian Basin in west Texas. MLPs tried maintaining distributions while issuing increasing amounts of equity and debt, but it didn’t work. Kinder Morgan (KMI) went first in 2014, rolling up three public entities into their corporate parent, simplifying from four traded entities to one (see What Kinder Morgan Tells Us About MLPs). They chose to pursue their backlog of growth projects rather than maintain payouts.

Corporations Targa Resources (TRGP), Oneok (OKE), and SemGroup (SEMG) similarly acquired their MLPs.  This maintained the dividends paid by the parent which also gained a tax shield, but as with Kinder Morgan, their MLP unitholders saw distributions cut in a taxable transaction.  An MLP investor base that had been promised stable and tax deferred income got neither.  Plains All American (PAA) and Williams Partners (WPZ) both cut payouts as they simplified their structures.  When NuStar (NS) CEO Brad Barron explained recently why they were combining their General Partner with their MLP, he cited 54 MLP distribution cuts since 2014 (NS made it 55).

One consequence of reducing payouts has been the alienation of the traditional MLP investor: the older, wealthy, taxable American. The covenant of stable distributions has been broken. Although in many cases it’s been replaced with the promise of future growth, that’s not interesting to an income-seeking investor. Today’s 8.24% yield on the Alerian MLP Index represents an investment opportunity, but it also represents a financing failure for MLPs. Because investors don’t trust the yield, the cost of equity for MLPs is higher than it should be.

MLP managements are speaking out. Brad Barron recently said, “…MLPs with low coverage and high leverage have been effectively shut out of the MLP equity markets, and even MLPs perceived as ‘healthy’ have found it increasingly difficult to issue common equity.” He followed up with, “…the exodus of MLP retail investors, and the nearly frozen equity markets- have called the long-term viability of the MLP model into question.” 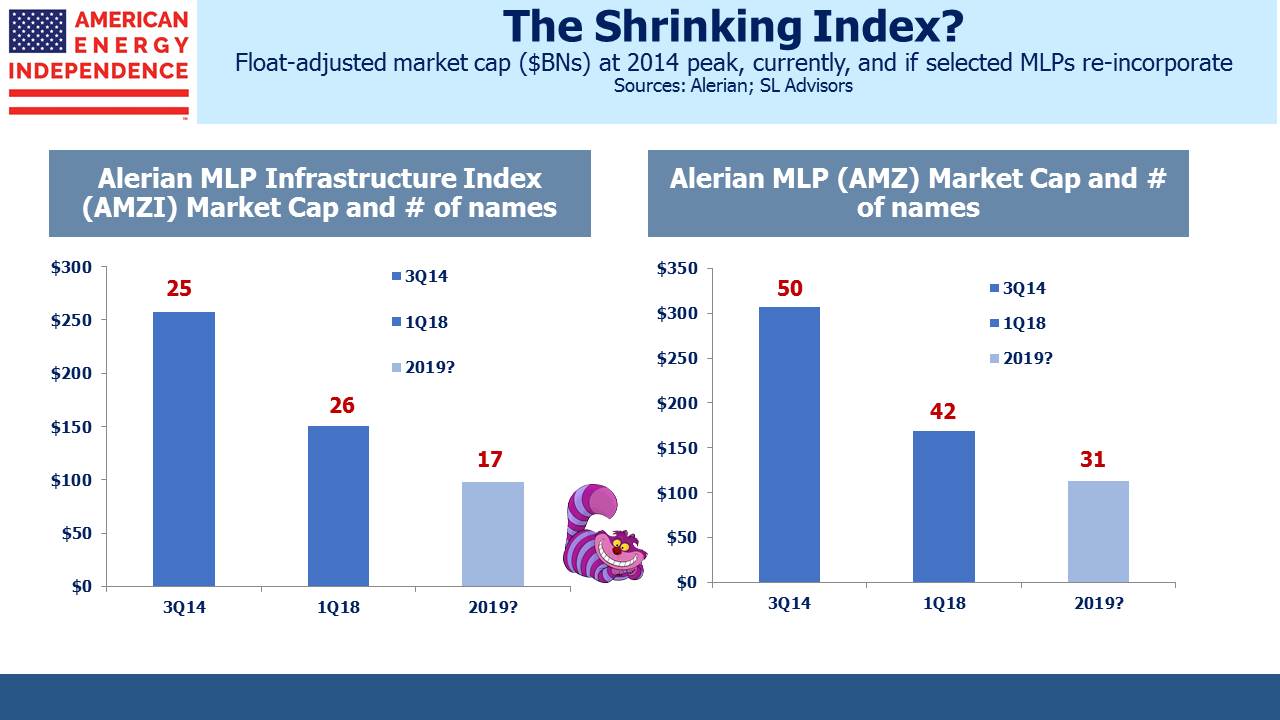 MLPs are converting to corporations because the MLP structure has turned out to be a poor source of growth capital. The Shale Revolution requires financing to build new infrastructure, and income seeking investors aren’t that keen to provide it.

In recent years MLP-dedicated funds have developed to provide MLP-exposure without the K-1 headache to mutual fund and ETF buyers. Such funds labor under a corporate tax liability (see AMLP’s Tax Bondage), incurring an additional cost which can be substantial in a strong market. In 2013-14 when sector returns were very good, taxes and other expenses ate up a third of returns for some funds, and on top of that holders still faced their own investment tax bill.

Moreover, we know from many, regular conversations that few financial advisors using such vehicles appreciate the tax drag their fund choice incurs. Mutual funds and ETFs don’t pay tax, so it’s not an obvious consideration – unless they’re MLP funds. The sharp drop on March 15th following the FERC ruling betrayed the narrowness of the investor base.

However, MLPs are certainly not going to disappear entirely. To MLPs that don’t need external growth capital, such as Enterprise Products (EPD) or Magellan Midstream (MMP), the depressed values of MLPs doesn’t matter much. Their owners can continue to enjoy the tax efficiencies, which include no corporate tax and deferral of income tax on the majority of distributions. But for most companies, the point of a public listing is access to capital. Traditional income seeking investors and tax-burdened MLP-dedicated funds are the two main investor groups – not a very reliable set of buyers on which a CFO might rely.

A shrinking MLP universe won’t hurt Alerian; as Stacey Morris notes, “We’re an indexing firm. We’re not in the business of giving investment advice.” Alerian publishes plenty of indices, and can add more. But holders of tax-burdened, MLP-dedicated funds have an additional risk to consider as MLPs incorporate, and they could use some advice. An analyst at East Daley recently warned that the FERC ruling may cause some firms to drop the MLP structure. Williams Partners (WPZ), Plains All American (PAA), EQT Midstream Partners (EQM), Antero Midstream Partners (AM), Spectra Energy Partners (SEP), TC Pipelines (TCP) and Enbridge Energy Partners (EEP) may all ultimately be rolled up into corporate parents.

In addition, the 12.6% yield on Energy Transfer Partners (ETP) is a powerful inducement to find an altered structure that attracts more investors. Without these, what’s left will represent an even narrower exposure to energy infrastructure than it does today. MLP-dedicated fund investors should be wary (see The Alerian Problem). Fewer names will either lead to more concentrated portfolios of less liquid securities or a highly disruptive shift to a broader index. Restricting your energy infrastructure investments to MLP-dedicated funds might be too narrow. Like the disappearing Cheshire cat in Alice in Wonderland, you may be left to contemplate just a smile.