Recently a long-time investor Jeff Waters suggested that it might be interesting to dig a little deeper into the valuation metrics that make midstream energy infrastructure such an attractive sector. It resulted in a podcast interview, which you can access here.

The roughly 2/3rds drop in growth capex since 2018 underpins an improving cash flow story. The components of the American Energy Independence Index (AEITR) have a market-cap weighted Free Cash Flow (FCF) yield of 10%. This is almost 2X the dividend. Longtime MLP investors will recall the common practice whereby MLPs paid out 90% or more of their Distributable Cash Flow. This left very little room for error.

Since 2016 the payout on the MLP-dedicated Alerian MLP ETF (AMLP) is down by half. Corporations have done better because they generally have higher coverage. Today’s pipeline CFO is building in plenty of cushion to protect payouts even in a steep downturn, which is why dividend hikes and buybacks are becoming more common.

JPMorgan just published a slide deck titled, “North America Long + World Short Hydrocarbons = Logistics Tailwinds.” An already positive outlook improved with Russia’s invasion of Ukraine in February. There is no plausible scenario in which Europe restores its reliance on Russian natural gas. The US has ample supplies available at low extraction costs. LNG exports will grow as fast as new facilities can be built.

The table below highlights some of the metrics which illustrate why we believe pipelines still have plenty of upside. For example, the sector’s 9X EV/EBITDA is more than 1.0X below the average since 2019. Returning to the mean would generate at least 15% capital appreciation. 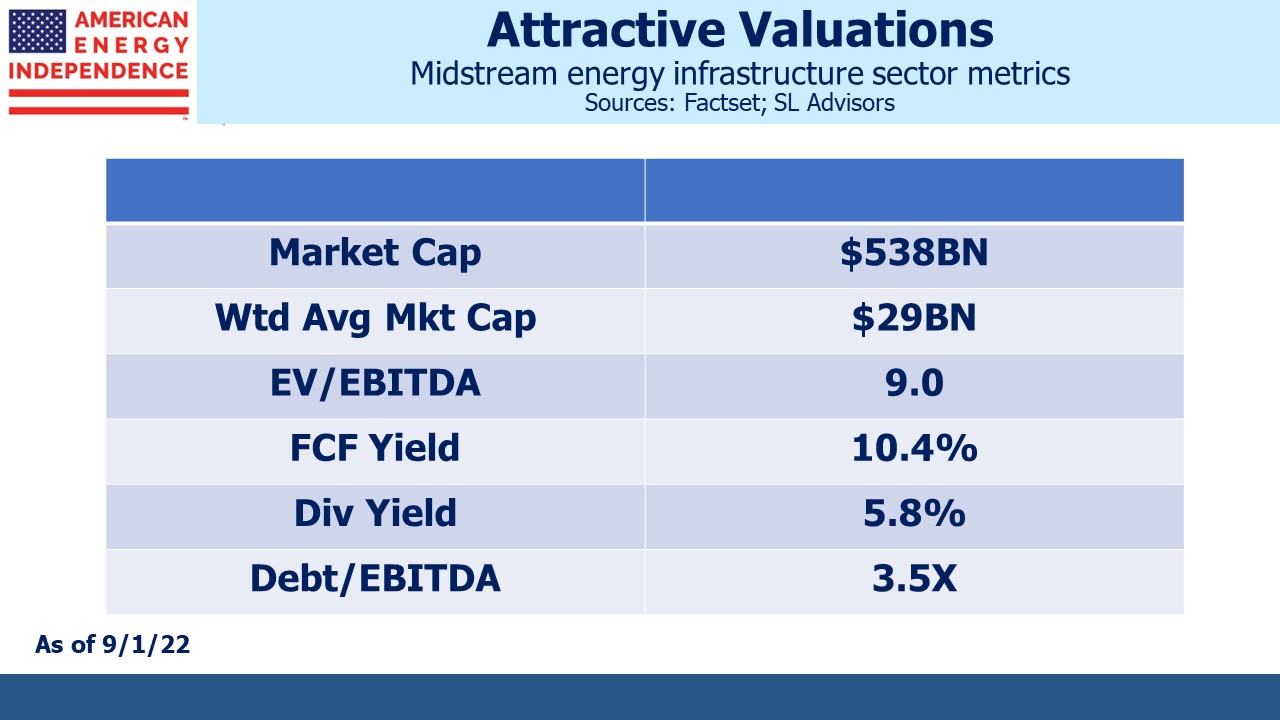 Investment grade Debt:EBITDA leverage of 3.5X continues to trend lower. Five years ago Kinder Morgan argued unsuccessfully to rating agencies that >5X was justified because of their diverse set of businesses. The industry has embraced a more conservative operating model.

It’s also worth remembering the driving force behind increased global energy demand – rising living standards. The chart below is several years old, but still neatly illustrates the close relationship between living standards and energy use. America’s per capita consumption may not be what the world should emulate, but there is no doubt that billions of people want to move up and to the right. This will endure as the dominating force in energy markets for decades to come, overwhelming rich countries’ desire for reduced greenhouse gas emissions. The last couple of years have exposed the inadequacy of extreme green policies followed in the EU and certain US states. Once again Californians are enduring a heatwave with insufficient power capacity. 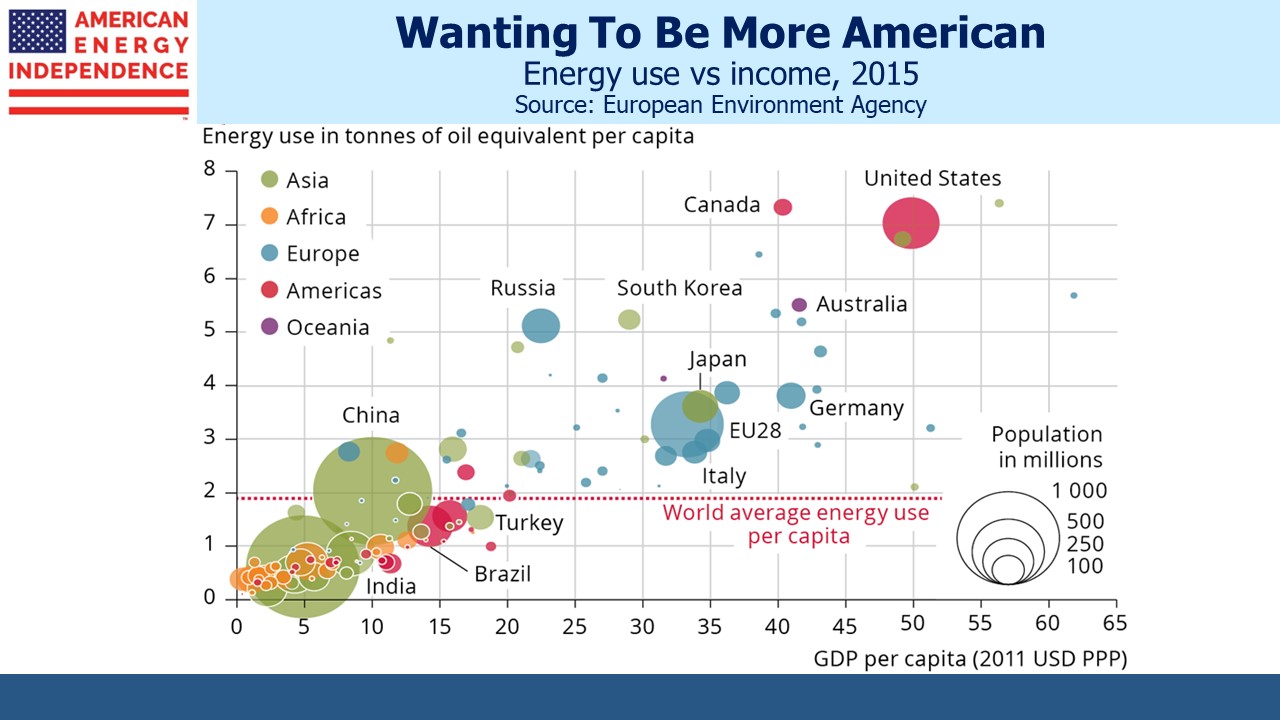 Carrie Bentley, a former policy official with the California Independent System Operator, said California had allowed too much fossil fuel capacity to be shut down without adequate renewable sources and large-scale back-up batteries. She admitted, “We retired too many gas plants too early.”

A reassessment of extreme climate policies should work to the benefit of natural gas by increasing its substitution for coal burning power plants.

So said ex-PM Boris Johnson in his moving eulogy to the British House of Commons on Friday. King Charles III referred to “a promise with destiny kept.” I have felt a surprising sadness at Queen Elizabeth II’s passing, similar perhaps to losing a distant but benevolent aunt. Rarely for me, I have a desire to be in England at this time, an emotion I only previously felt when our team played in the European Cup Final last year at Wembley, London. She was a constant during times of change; queen for my entire lifetime and an apolitical figurehead often when one was most needed.

My grandparents tolerated no criticism of the royal family during my childhood. They remembered then-Princess Elizabeth and her parents enduring the German blitz of 1940 alongside other Londoners. Simon Schama, the erudite writer who chronicles major current events from the perspective of history’s great arc, called Elizabeth, “quintessential Britain; not all of it, of course, but more than the head of state — the heart of the matter, the personification of a common, idealised identity.”

Some Americans will question that hereditary leadership should provoke such sentimentality. I’ve never heard any regrets that George III was dumped in 1776.

But to be a British subject is to embrace the Crown. I live joyfully in America but part of me will always be there.