The Complex Politics of Climate Change

Greta Thunberg’s speech at the United Nations may have grabbed the climate change headlines. But for those who find policy prescriptions from someone not yet out of high school a publicity stunt, the Energy Information Administration’s (EIA) 2019 International Energy Outlook was more interesting. 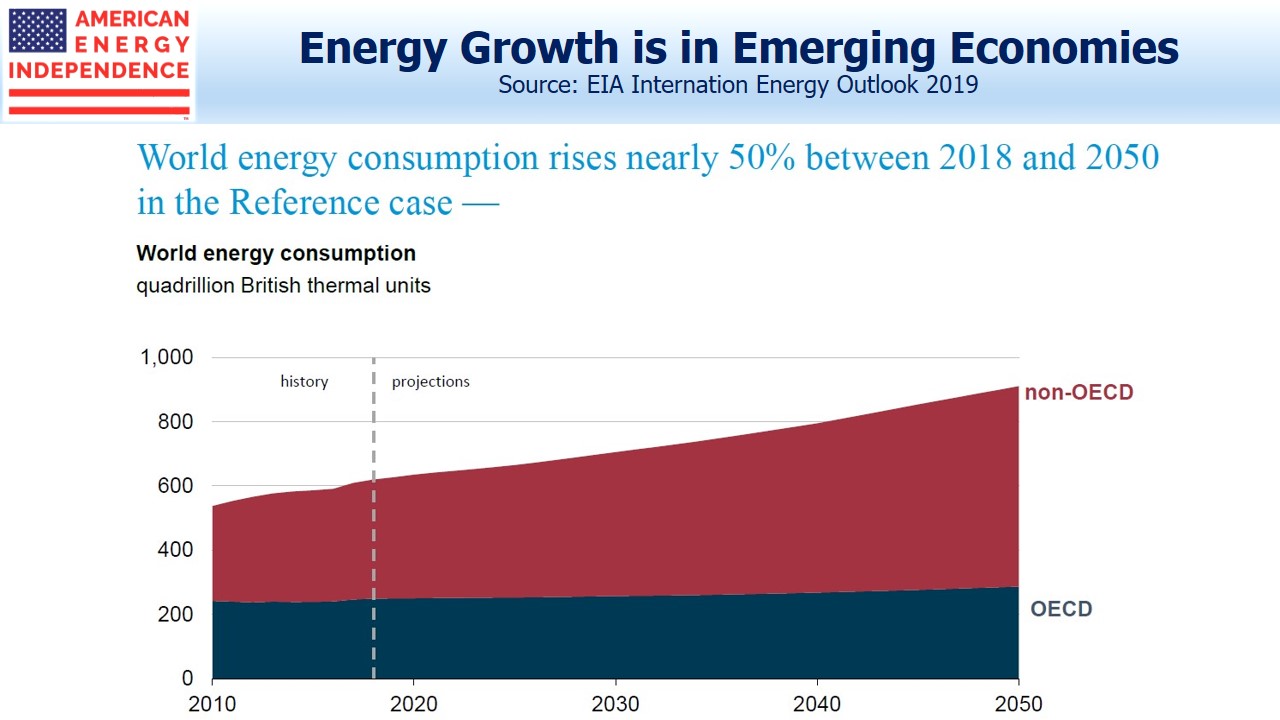 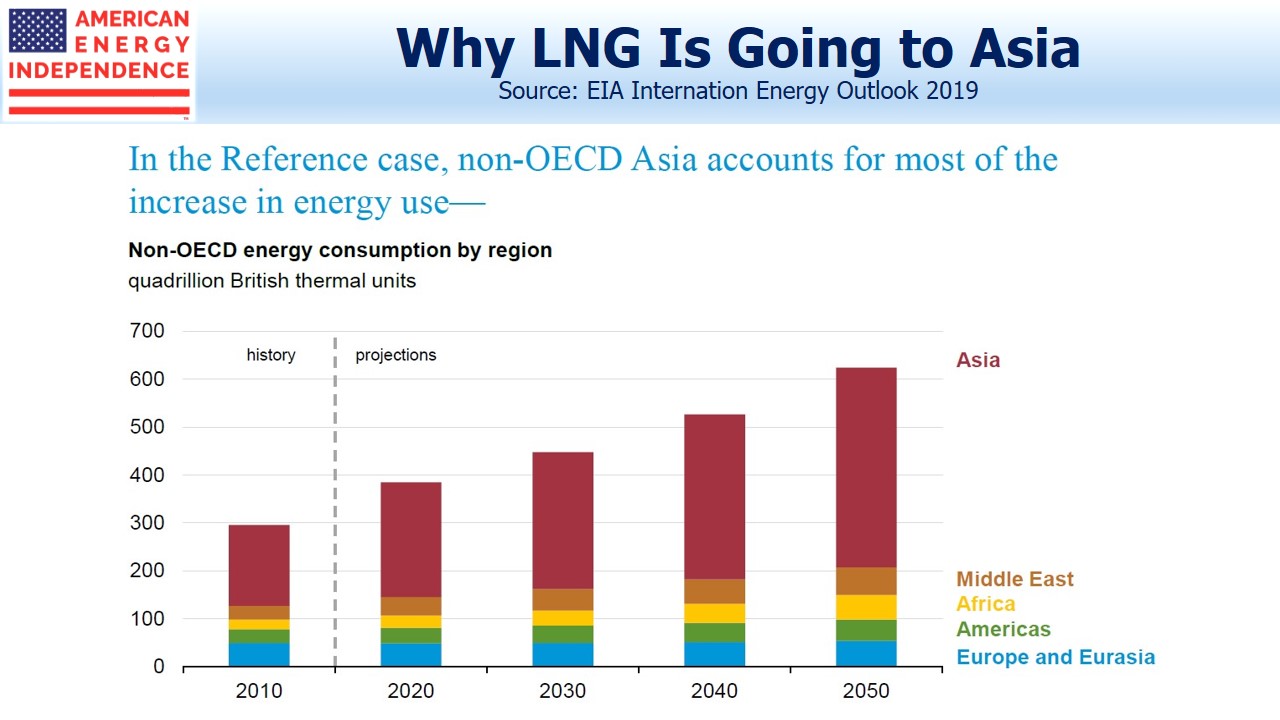 The UN’s Intergovernmental Panel on Climate Change (IPCC) wants the world to reduce man-made net CO2 emissions to zero by 2050, in order to limit global warming to a further 1.5 degrees C. By contrast, the EIA expects energy-related CO2 emissions to grow at 0.6% annually, a third of the 1990-2018 rate but nonetheless in the wrong direction. This is because the EIA forecasts world energy use to increase by nearly 50%, with virtually all that growth in non-OECD Asia (often referred to as Asia ex-Japan).

According to Climate Tracker, only two countries (Morocco and Gambia) are on track to meet their goals under the 2015 Paris Agreement, which turned the IPCC’s recommendations into governmental commitments.

The goal of lowering emissions is at conflict with many other UN goals, such as eliminating poverty and hunger, and ensuring access to clean water and sanitation. Non-OECD countries are generally where these goals need to be met, and their pursuit is increasing energy consumption. The rich-country OECD world wants reduced CO2 emissions while poorer non-OECD countries additionally want higher living standards. 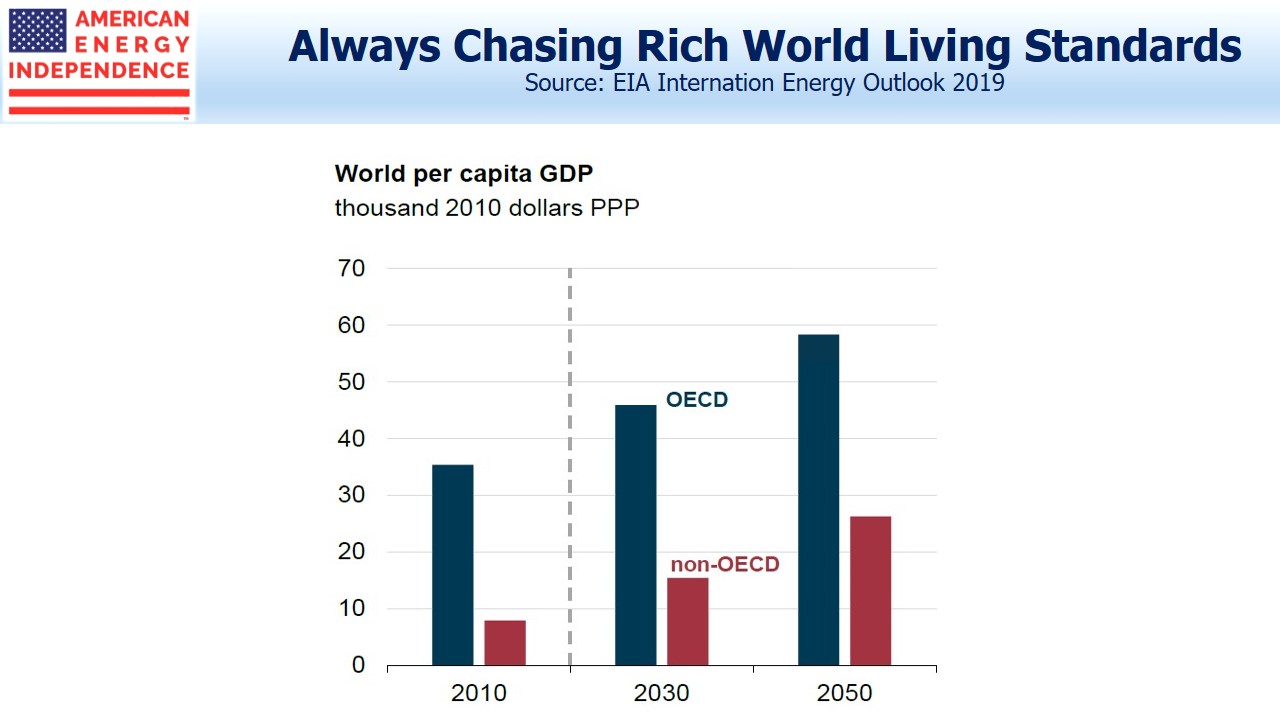 The charts in the EIA’s outlook provide a sobering picture of the incompatibility of these objectives. Rising non-OECD living standards will by 2050 remain still 25% less than in the OECD today, and less than half the 2050 rich world level. This is in spite of growth in world energy consumption being fully taken up by non-OECD countries. Indian per capita residential energy consumption is still expected to be less than a quarter of U.S. by 2050.

Emerging Asia is the major source of this growth. India’s population is projected to surpass China’s over the next couple of decades, driving India’s faster GDP growth and also making India the fastest growing user of coal. China will remain biggest overall.

Growth in Indian electricity demand will be primarily met with renewables. It’s easier to shift your mix of power generation when consumption is growing. Yet India will still double its output from coal-fired power plants.

The reason almost none of the signatories to the Paris Agreement are on track to achieve their emission goals is that public support is broad but shallow. One survey found most U.S. households wouldn’t spend more than $10 per month to fight climate change. 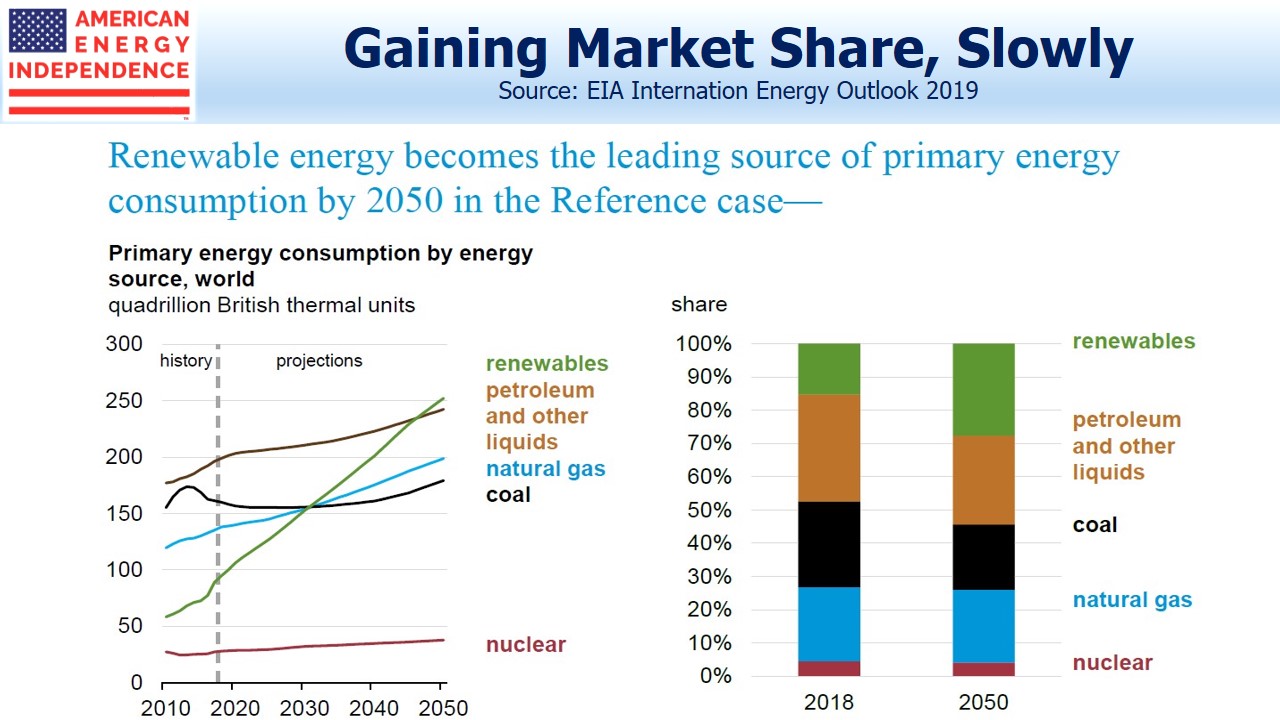 Yet, dramatic reductions in emissions require substantial lifestyle changes with more expensive energy. Renewables are slowly gaining market share, but regardless of the promises of environmental extremists, all serious forecasts show fossil fuels remaining the world’s dominant source of energy. The EIA projects that we’ll be using more of all sources of energy. Consumption of petroleum and other liquid fuels will grow by 20%; natural gas by 40%. Renewables are expected to almost double their share of world energy, to around 28% by 2050, but satisfying growing global energy demand will require substantial growth in hydrocarbons. 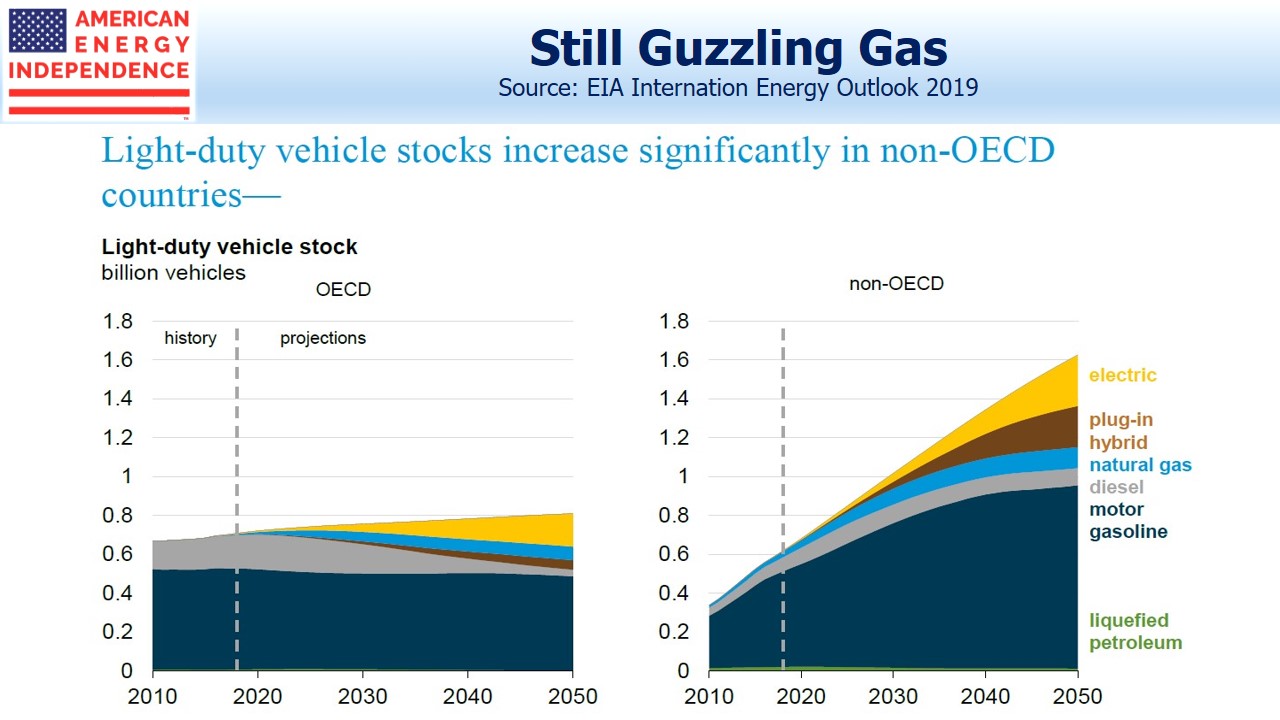 Few Americans realize that the U.S. would need to reduce its CO2 emissions by around 15% over the next decade to meet its pledge, and that we’re generating 3.5X the amount that’s scientists believe is consistent with 1.5 degree planetary warming. If the U.S. had a plan to meet its pledge on emissions reduction, cost would quickly become an issue.

A big shift to renewables in the U.S. would raise the cost of energy. This is indisputable, because otherwise renewables would already be dominant. Climate extremists rarely discuss the costs, whereas we’ll need to make informed decisions about costs versus benefits.

Moreover, those most exposed to rising sea levels live in poor countries where emissions will continue to increase in order to raise living standards. Rich countries are far better able to manage the effects of changing climate. No U.S. politician has yet had to explain why Americans should pay more for energy in order to protect other countries from rising sea levels, even while those countries increase CO2 emissions. Trump’s planned withdrawal from the Paris Agreement next year is grounded in domestic political reality.

Paris pledges allow India, China and other non-OECD countries to continue increasing their emissions, acknowledging that increased living standards require more energy. While there is a moral argument in support of higher CO2 emissions from poorer countries, U.S. public opinion is untested on the issue of expensively curtailing domestic emissions to accommodate more output elsewhere. This will eventually be a significant political problem. Domestic environmental extremists are completely mis-directed. Growth in emissions is coming from Asia.

How will the world resolve its conflicting goals?

There are some sensible solutions: Federal standards and fast-track approval process for nuclear energy, which is clean and safe; phase-out coal with its harmful emissions in favor of cleaner natural gas; a carbon tax; Federal R&D into cleaner use of what works, which is fossil fuels.

All these steps and more will be needed to tackle the problem. Unfortunately, Democrat solutions such as the Green New Deal (see The Bovine Green Dream) and banning fracking are hopelessly impractical. Because their ideas have little prospect of implementation, Republicans aren’t pressured to offer alternative ideas.

The EIA’s report shows what world energy consumption will look like without significant changes in policies. Practical, centrist solutions that acknowledge trade-offs will be needed to develop deeper support for combating climate change. Voters will want to understand what they’re paying for. Until that happens, fringe policy prescriptions will scare people away. Greta Thunberg’s political grandstanding isn’t helping.