The Losers From Quantitative Easing

Sterling collapsed and by September 28th the Bank of England had abandoned its balance sheet reduction (Quantitative Tightening, or QT) in order to urgently restore financial stability. In the UK bond market pension funds were dumping thirty-year gilts, driving the yield from 3.5% to (briefly) 5%. Conservative party MPs are already discussing ways to dump their new PM.

By Friday self-preservation and market turmoil had forced her to abandon most of the plan, firing her Chancellor of the Exchequer Kwasi Kwarteng for good measure. Truss will henceforth be dodging political regicide following her disastrous start. As the Economist devastatingly observed, her shelf life is about the same as a lettuce. 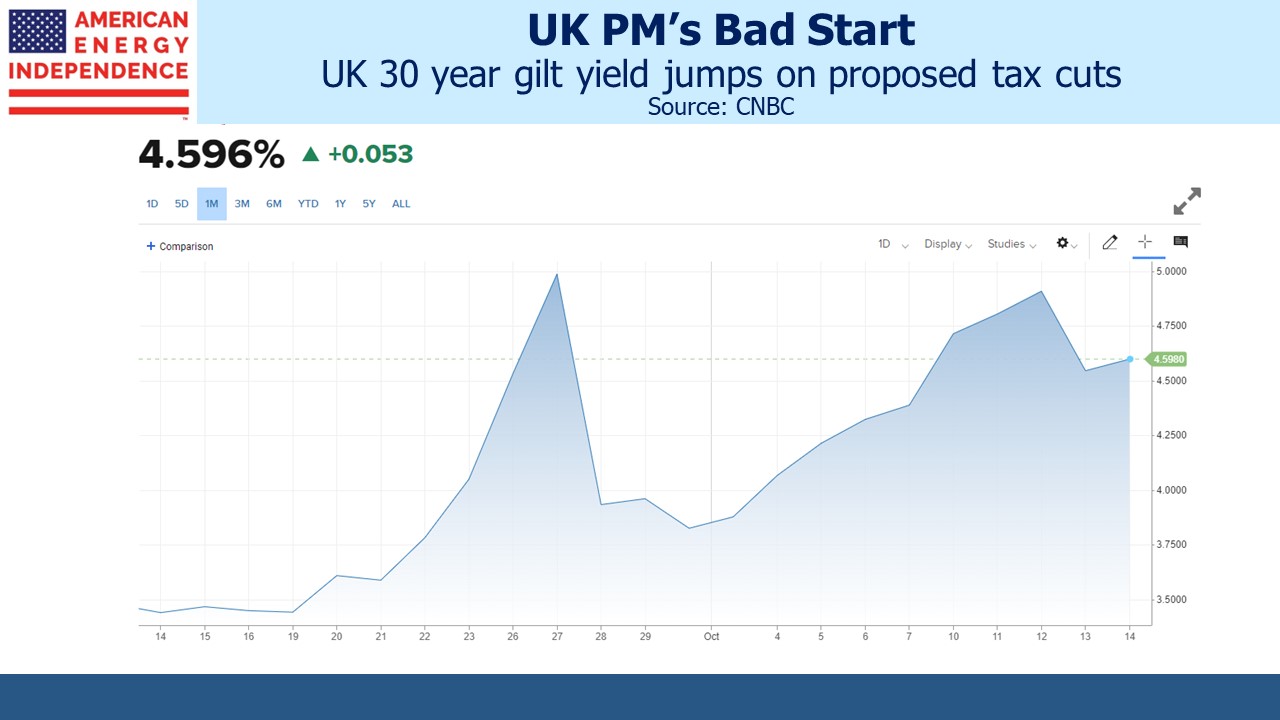 UK residents are pondering how governmental ineptitude on an epic scale has raised interest rates and made foreign trips more expensive. The rest of us are wondering if it could happen here.

Pension funds and leverage are a poor combination. The solemn trust imposed on those that manage people’s retirement savings requires ensuring market volatility never interferes. Therefore, Liability Driven Investing (LDI), the proximate cause of the turmoil, is worthy of examination. Anytime you see Value at Risk (VaR) included in marketing literature aimed at pension funds, as is the case with LDI, there’s a problem lurking.

Defined Benefit (DB) pension funds are obliged to meet certain obligations in the future, often linked to salary at retirement. Defined Contribution (DC) plans (like 401Ks) are becoming increasingly common, because employers prefer shifting the investment risk to plan participants. The UK has around 5 million people covered by DB plans with assets of £1.8TN ($2TN). For comparison, the US has $16.8TN in DB plans but $13.1TN is in Federal, state or local plans, many of which are underfunded with unclear ultimate outcomes for retirees.

DB pension funds compare their assets with the Net Present Value (NPV) of their obligations to figure out if they have a surplus or deficit. Pensions are among the longest liabilities around, and their NPV is acutely sensitive to changes in the discount rate.

Because US public pension funds follow Governmental Accounting Standards Board (GASB) rather than GAAP, they calculate the NPV of their liabilities oddly, in that they use the rate of return they think they’ll earn on their assets. It creates the perverse incentive to add risky investments since they’ll generally have a higher return, which in turn depresses the NPV of their obligations (see Through the Looking Glass into Public Pension Accounting). The average assumed return on US public pension assets, and therefore the discount rate on their liabilities, is just under 7%. Even though this has been falling, it’s still wildly optimistic.

The UK government issues guidance for DB plan discount rates – currently much lower than the US at  around 2.5% depending on the specifics of the plan.

Treasury Inflation Protected Securities (TIPs) offer a return linked to inflation and are appealing to pension funds with their long liabilities. In the UK index-linked gilts are called “linkers.” 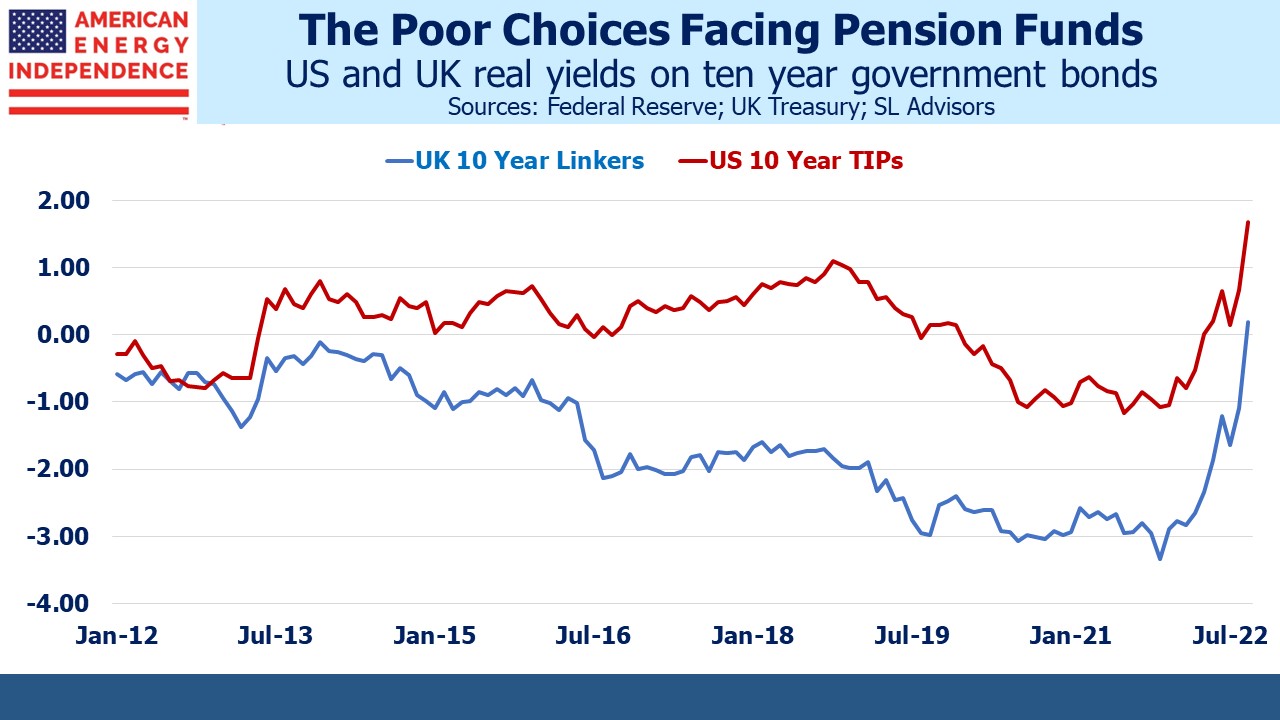 Real yields have been falling for years, and on US government debt have at times been negative. The UK is a more extreme version, presumably reflecting a relatively greater appetite of UK pension funds to immunize inflation risk compared to their US counterparts. The dearth of choices available to UK pension funds is apparent in the 1.5% coupon with which the now plunging 30 year gilts were issued just last year.

Investing at negative real yields guarantees reduced purchasing power. Falling long term rates have hurt UK pension funds by increasing the NPV of their liabilities. In theory equities, which represent a perpetual claim on company profits, ought to compensate. A 1% drop in a thirty year discount rate increases the NPV of a payment due in thirty years by 30% (ie the duration of a 30-year zero coupon bond equals its maturity). Unfortunately, you can’t rely on stocks going up by 30% at the same time.

UK pension plans sought advice on managing their exposure to falling rates, and it was helpfully provided by firms such as Russell Investments in the form of derivatives. Simply put, LDI is a derivatives contract that generates a profit for the pension fund when long term rates fall, the point being that falling rates will lead to a lower discount rate and therefore a bigger NPV of their pension obligations. LDI behaves like an investment in long term bonds, but without the need to spend cash to buy the bonds.

Derivatives contracts, like futures, require counterparties to post margin to one another depending on which side of the contract is in the money. The LDI models on which advice is based are naturally complex and proprietary. Pension funds probably relied on the assumption that losses on their LDI trades would be offset by a reduced NPV of their liabilities, and they could use pension contributions to provide additional margin if required. VaR analysis from their consultants would have provided reassurance.

Two things went wrong. One is that UK linker real yields fell to deeply unattractive levels, causing pension funds to explore risky alternatives. The second is that the new PM’s ill-considered fiscal expansion caught the market off-guard, driving yields up sharply. This in turn shredded VaR assumptions, requiring untimely sales of securities by pensions to cover margin calls on LDI losses. Derivatives create leverage. On one level this is another story of too much risk.

However, the underlying problem is low/negative real yields, and these are caused in large part by Quantitative Easing (QE). Society generally likes low borrowing costs, but every borrower has a lender and pension funds are clearly QE-losers. Central banks have been quicker to grow their balance sheets with QE than to shrink them with QT.

Ironically, the Bank of England provided updated guidance on QT on September 22, the day before Kwasi Kwarteng dropped his fiscal bomb. Six days later they were buying again to mop up the mess.

Buying bonds is now part of the central bank toolkit, and in the US it’s virtually certain that the next recession will be upon us before the Fed has shed its excess $TNs. Although real yields have moved up recently, there’s little reason to think their long term decline has ended. The problems of DB pensions haven’t been solved. But the UK does seem like a unique case of poor investment choices and an impetuous new PM.

Meanwhile the Fed is singularly focused on inflation which increases the odds they’ll make another mistake, upon which they’ll switch back to employment. QE will begin again, becoming a permanent form of debt monetization. 2% long term inflation is a poor bet. This FOMC shuns multi-tasking and fixates on one metric at a time. That will be Jay Powell’s legacy.