Environmental activists who are against all fossil fuels often accuse their opponents of being “climate deniers”. They claim a scientific basis for their often extreme views, asserting that rejecting their solutions for climate change is to reject science.

In fact, the Green New Deal (GND) and its supporters use science selectively to support their objectives and reject science where it suits them. The GND has been widely criticized for its extreme and implausible call for the elimination of fossil fuels (the House resolution calls for, “eliminating pollution and greenhouse gas emissions as much as technologically feasible” (italics added). Note there’s no mention of economic feasibility or any consideration of cost/benefit tradeoffs. It seeks, within a decade, “meeting 100 percent of the power demand in the United States through clean, renewable, and zero-emission energy sources” which isn’t technologically feasible today, and certainly is economically implausible. 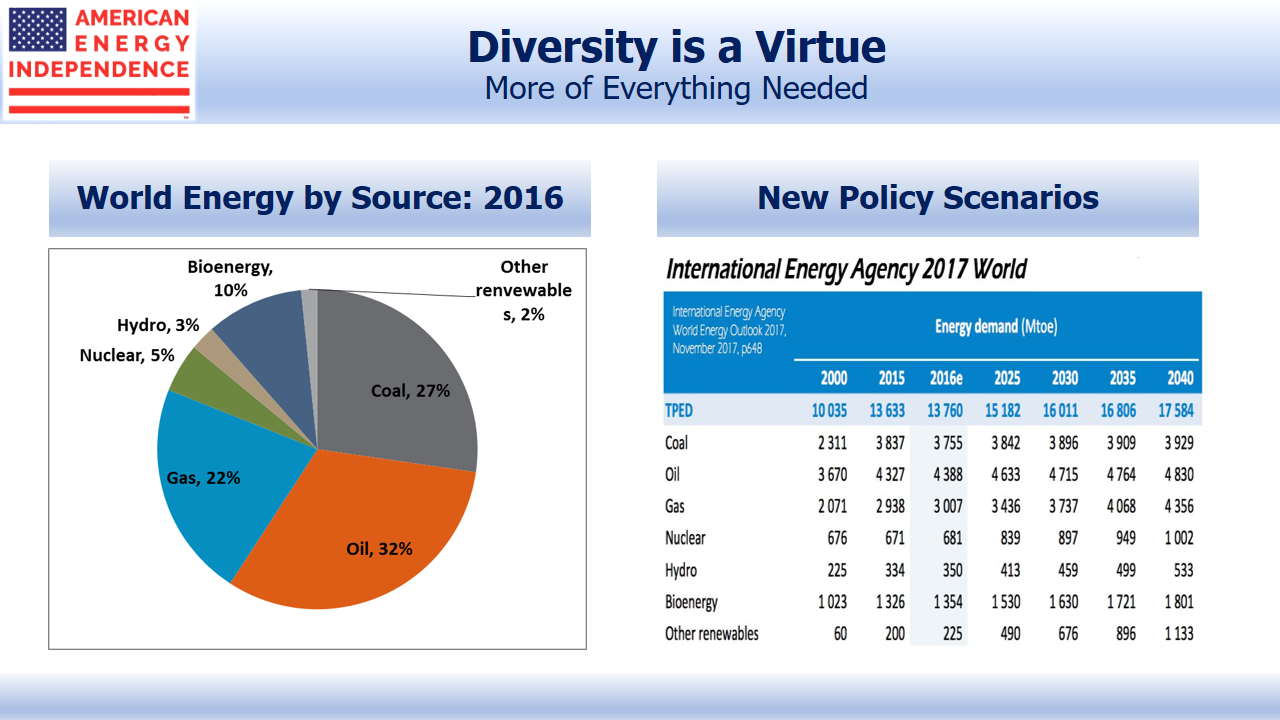 The GND also threw in a socialist economic agenda, including a Federal job guarantee. Its critics seem far more numerous than its supporters, and include us (see The Bovine Green Dream).

Any serious effort to limit Greenhouse Gases (GHGs) must incorporate nuclear energy. The GND House resolution is silent on the topic. The infamous FAQ document that was released and then disowned by Bronx Congresswoman Alexandra Ocasio Cortez (AOC) called for decommissioning nuclear power. 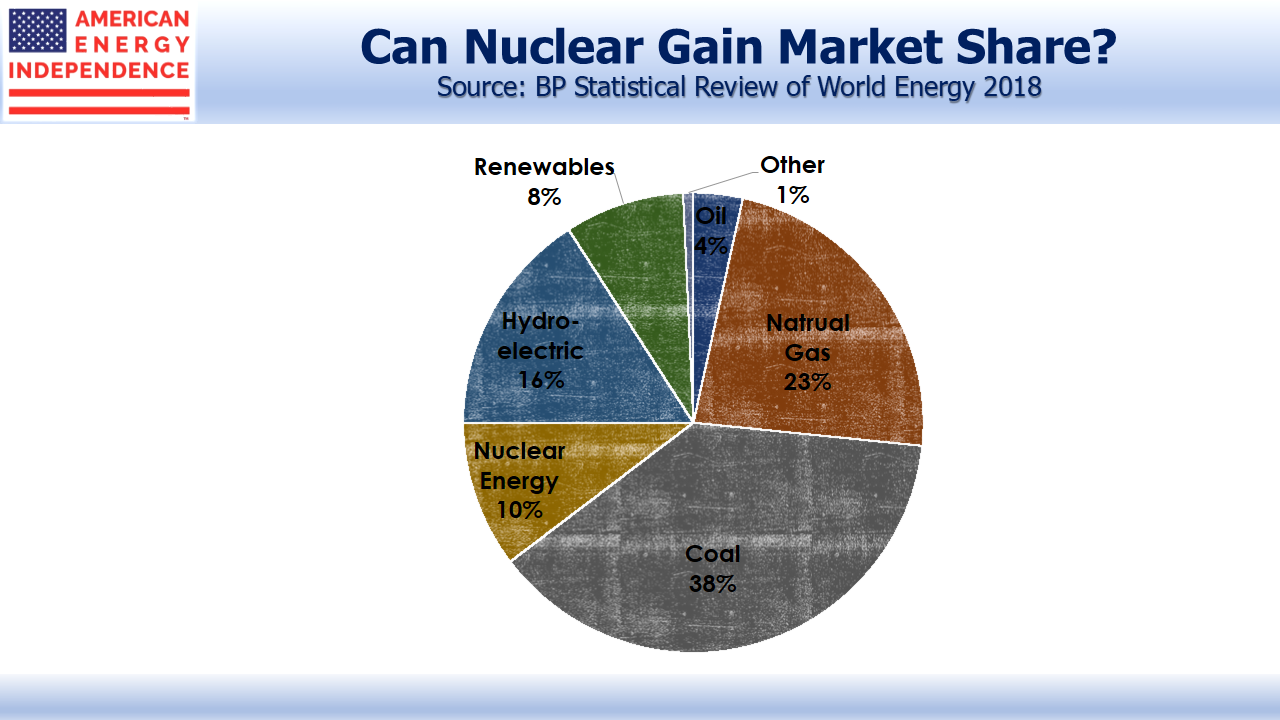 The scientific evidence supporting greater use of nuclear energy is strong. The world has built a powerful safety record. Accidents at Three Mile Island (1979), Chernobyl (1986) and Fukushima (2011) promote widespread public fear of nuclear reactors. But per Kilowatt Hour (kWh) of energy produced, the European Union and the Paul Scherrer Institute, the largest Swiss national research institute, found that nuclear power is safer than coal, oil, gas and even (by a slight margin) wind as a cause of deaths.

Because a nuclear accident carries such potential for devastation, the industry has developed a culture of redundant safety and continual improvement. Knowledge is widely shared within the industry globally, and the record bears this out.

A nuclear incident provokes images of Hiroshima, with enormous loss of human life and widespread radioactive contamination. But nuclear physicists argue, with plenty of evidence, that the process by which nuclear energy is harnessed doesn’t involve this risk. Apparently, during the Cold War neither Russia nor the U.S. targeted the other’s nuclear power plants because the likely damage would be modest.

The main risk with a nuclear accident is the release of radiation. Any death is tragic, but all energy production carries risks and a dispassionate analysis must consider the benefits and risks of any fuel source in combination.

Those who claim to care about climate change but reject increased use of nuclear power are rejecting science. Mike Shellenberger, who writes thoughtfully about such issues, has said, “The problem with nuclear is that it doesn’t demand the radical re-making of society, like renewables do, and it doesn’t require grand fantasies of humankind harmonizing with nature.”

Radioactivity occurs naturally all over the world. Embracing sunlight and wind as more natural than uranium is a belief system but isn’t a scientific solution to meeting the world’s need for power.

The GND has probably set back serious efforts to address climate change, because its wild extremism shows its supporters to be more interested in demagoguery than solutions. It may fire up a minority, but it betrays little interest in debate.

The Sierra Club, which also opposes nuclear energy, continues to work against any fossil fuels. Over the last decade, the U.S. has achieved a greater reduction in CO2 emissions than any other country (see Guess Who’s Most Effective at Combating Global Warming) because of power plants switching from coal to natural gas. 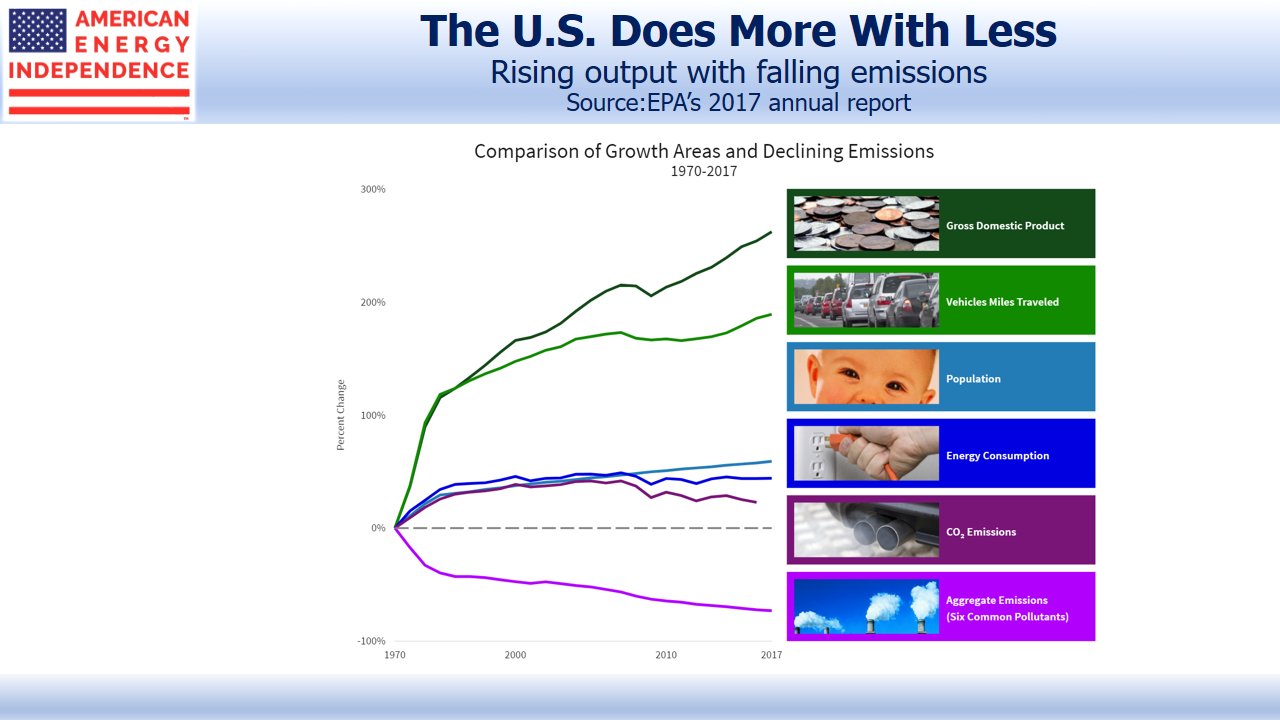 AOC’s hypocrisy is on full display, as she shuns the New York subway and defends her frequent Uber use: “Living in the world as it is isn’t an argument against working towards a better future.” The GND’s main author lives Animal Farm egalitarianism (“some…are more equal than others”).

At SL Advisors, we are helping finance America’s use of cleaner fossil fuels like natural gas in favor of coal, which we avoid. We are doing our bit to lower GHGs and make a better planet. We’re doing more than the Sierra Club, AOC or the GND supporters, because we’re focused on solutions that are effective today. The debate about climate change would benefit from more scientific rigor.