When MLP investors cast around for characters to blame for the past few years of underwhelming  equity returns, management teams are the obvious target. Like their upstream clients, midstream businesses embraced the endless volume growth of the Shale Revolution with sharply increased growth capex. By 2018 they’d heard the message from investors that stability trumps growth and begun to pull back. This year, as a result of continued capex frugality, free cash flow will double. Given the pandemic, which even led briefly to negative crude prices in April, this result is extraordinary and only now beginning to register with investors. 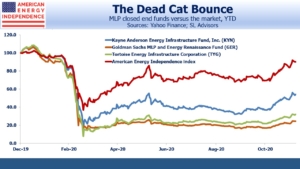 Although recent equity returns for pipelines have been sparkling, few will soon forget the trauma of March when wholly indiscriminate selling drove prices to unfathomable depths. Management teams are responsible for operating performance and while this drives equity returns over the long run, in between quarterly earnings reports stock prices gyrate on investor opinion, guesses and hunches. March was miserable for everyone involved in midstream, but chief among the villains of that sector-wide margin call are the managers of MLP Closed End Funds (CEFs).

These vehicles have been around for years, holding MLPs in an inefficient, tax-paying c-corp structure. They were Wall Street’s first attempt at separating the K-1 from the sought-after retail buyer. The corporate tax liability, an expensive haircut to returns, was obscured by the tax-deductible interest expense on leverage.

MLPs were once considered a fixed income substitute. Borrowing money to buy bonds in a closed end fund structure can be defensible if the underlying assets are very stable. MLPs long ago lost the advantageous reputation of “income-seeking substitute” as their rush for Shale Revolution growth stressed balance sheets and led to higher volatility. Nonetheless, MLP CEFs retained their leveraged model, even though most were forced into distressed sales during the 2014-16 slump when depressed MLP values tripped risk limits.

Moreover, they stuck with it even while the pool of MLPs shrunk. This now unrepresentative set of securities is a third of the American Energy Independence Index, our broad-based index of North American midstream energy infrastructure. By comparison, MLPs are smaller, less creditworthy, more liquids/less natural gas focused, and offer weaker corporate governance. In short, nobody is contemplating an IPO of an MLP closed end fund today. If they hadn’t been created years ago, they wouldn’t be around.

The problem with investing with leverage is that it leaves you exposed to even a brief sharp fall in your holdings. If you buy $100 of securities with $30 in debt, a 40% market drop takes your leverage from 30% to 50%. If that’s beyond your lender’s risk tolerance, sales must immediately follow. Once done, recouping the locked in losses is almost impossible. The leveraged investor assumes risk to the path of short term returns that the cash buyer does not.

To see how dumb an idea closed end MLP Funds had become, consider that leverage at MLPs had been coming down in recent years as rating agencies tightened the standards required of an investment grade rating. Debt:EBITDA of 4X became the new target, and MLPs either reached it or planned to.

A portfolio of MLPs is not a diversified equity portfolio. Individual security returns will differ to be sure, but the group will largely move together — especially so when prices are falling hard. So, when the closed end fund MLP portfolio manager adds leverage to this homogeneous basket of securities he (and it most assuredly is he, for such imprudence requires excess testosterone) is asserting that pipeline companies are managed too conservatively. Never mind that the industry and its rating agencies have settled on 4X Debt:EBITDA as appropriate, the MLP PM believes 5-6X is fine.

The intellectual arrogance in this stance is breathtaking. Because the holdings of an MLP CEF will track each other more than any other sector, this amounts to increasing each individual company’s leverage to 5-6X. The only possible justification for this is if the PM has both the plan and the skill to reduce leverage just before the crash. As we saw in March, they had neither.

March is a memory, although still raw for many. At the low on March 18, the sector was briefly –63% YTD. MLP CEFs lost almost their entire value through forced sales. Tortoise’s fund closed –92% for the year on that date. Even now MLP CEFs, including those run by Goldman Sachs and Kayne Anderson as well as Tortoise, have still lost half to three quarters of their value since January 1. They have barely participated in the sector’s strong recovery, now -10% for the year.

MLP CEFs could never make up for their forced sales in March when leverage limits kicked in.

If you were invested in pipelines but avoided MLP CEFs you probably feel unaffected. You’d be wrong. When these funds sold, they defined the low and caused prices to fall more than they would have absent the forced deleveraging. Your portfolio consequently fell more than it had to as well. The excessive volatility doubtless induced other investors to exit, tired of the distress. It’s permanently part of the price history of the sector, guiding future buyers in their assessment of risk. In short, today’s holders require more conviction in their investment thesis to compensate for the risk history suggests they’re taking.

The villains in this episode are the PMs of funds run by Goldman Sachs, Kayne Anderson and Tortoise, to name a few. They all persisted with the arrogantly leveraged structure right into the maw of the March collapse. Goldman Sachs knows about risk, and the firm emerged from that period of heightened volatility relatively unscathed. Their fund blowing up simply means the PM didn’t get the memo from Risk Management to cut back.

But Kayne Anderson and Tortoise are dedicated MLP investors. Their risk management function should have had little else to confuse it. They clearly had no risk management, no judgement, or neither.

The silver lining is Darwinian, in that such incompetence destroyed sufficient capital that MLP CEFs are no longer big enough to matter to anyone other than their hapless investors.

If you own one of these wretched vehicles, consider the stewardship practiced by your PM and whether it’s worthy of your money.