Distributable Cash Flow (DCF) is the cash return from existing assets. REIT investors know it as Funds From Operations (FFO), an equivalent measure. Because DCF excludes spending on new projects, it reflects steady-state cash earned before growth initiatives. This is why DCF or FFO are commonly used in evaluating businesses whose returns come from large fixed assets, such as infrastructure and real estate.

Free Cash Flow (FCF) is the net cash generated (or spent) after considering DCF, growth projects and any financings and asset sales (i.e. after everything). It’s common for companies that are investing heavily to have little or negative FCF. Investors in such stocks ultimately expect FCF commensurate with sums invested.

Exploiting the Shale Revolution has boosted growth capex by billions of dollars, both for upstream companies as well as the midstream infrastructure sector. It’s why FCF has substantially lagged DCF in recent years. Although today’s income statements don’t show it, a combination of slowing growth capex and rising DCF will cause pipeline companies to produce vastly more FCF.

We examined all the names in the American Energy Independence Index (AEITR), which provides broad exposure to North American midstream corporations along with a few MLPs. On a bottom up basis, FCF was just over $1BN last year, a paltry figure given the industry’s $514BN market cap.

The need for growth capital broke the MLP model (see It’s the Distributions, Stupid!). Their narrow set of income-seeking investors wasn’t willing to support the growing secondary offerings of equity without higher yields. Companies needed to find the cash somewhere, so four years of distribution cuts followed – for example, the Alerian MLP ETF (AMLP) has cut its payout by 36% since 2014, reflecting reduced distributions by the names in its index.

The industry is over the hump of its spending on growth projects. Analysts look carefully for “capex creep” whereby annual guidance for new spending gets revised upward during the year. But based on current bottom-up guidance for the AEITR, we expect such spending to be down 4% this year, with >20% reductions in 2020 and 2021.

Recently completed projects are starting to show up in higher DCF, which we estimate will grow by 8% this year and 12% in 2020. A 90% completed pipeline isn’t much use, and multi-year construction projects only generate cash when they’re completed and paid for.

Making more money from existing assets, while spending less on new ones, is a potent combination. By 2021, FCF is set to be close to what DCF was in 2018. Moreover, much of today’s growth is internally funded, meaning little reliance on issuing equity. Based on current guidance, Transcanada (TRP) is the only company likely to tap the equity markets meaningfully, as construction of the perennially delayed Keystone XL gets under way.

As a result, last year’s sector-wide $1BN in FCF is set to jump eightfold this year, more than triple in 2020, and increase by two thirds again in 2021. It’s why dividend growth is back (see Pipeline Dividends Are Heading Up). Our analysis assumed no new debt issuance, which therefore assumes leverage will continue to decline. To the extent that the industry maintains current Debt:EBITDA ratios by issuing more debt, FCF will grow more than our forecast.

The “bridge” chart illustrates annual FCF 2018-21 with the changes in DCF and growth capex forming the bridge from each year’s FCF to the next. 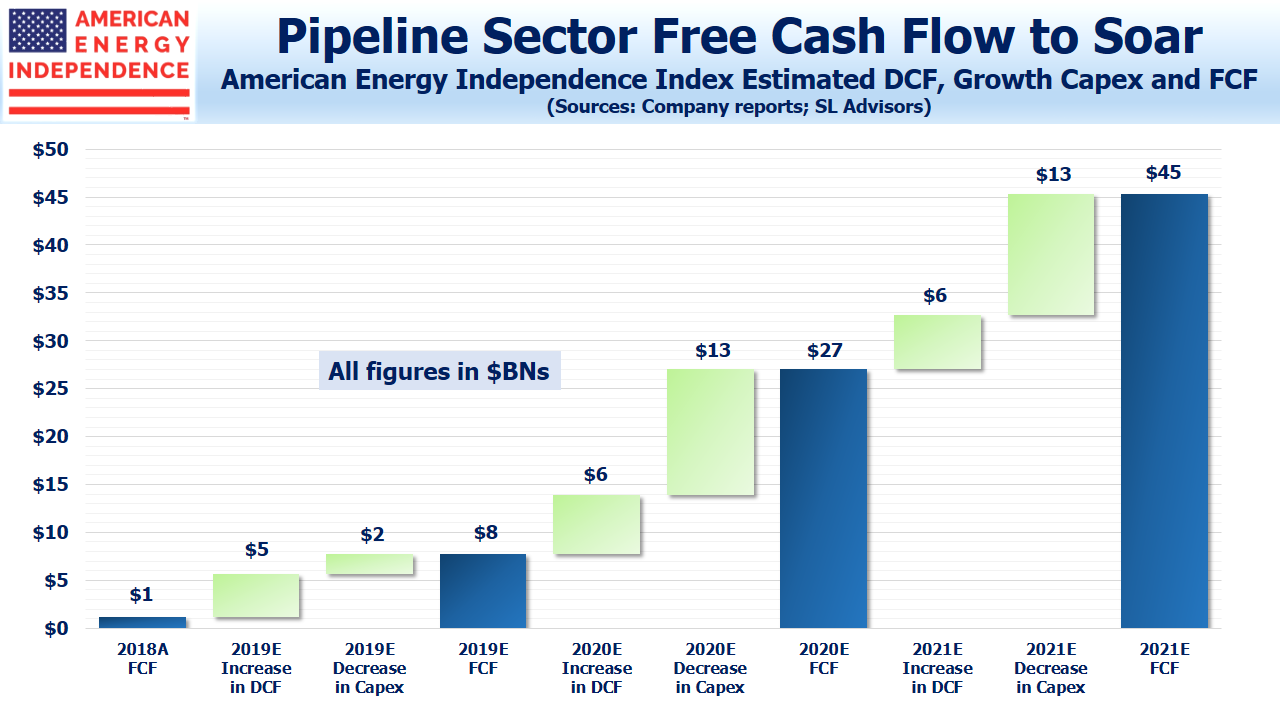 The Shale Revolution has long been described as a huge boost for America, including on this blog. Investors often complain that it’s been a far better story than an investment. The strong start to the year has been a welcome surprise to many long-suffering holders. And yet, a substantial jump in FCF is still not widely expected. The sector has plenty of upside.

We are invested in TRGP and TRP. We are short AMLP.