The Bond Market Sends A Warning

Although markets were quiet over the Christmas break, treasury yields drifted steadily upward. On the first trading day of the new year the ten year yield burst higher by 0.12%. Although the Fed seemed to bring inflation expectations under control at their most recent FOMC meeting in December, this is now starting to reverse.

The yield curve has been steepening, reversing the sharp flattening that hurt several hedge funds late last year. It still seems impossibly flat – we’re about to enter a tightening cycle and expectations are that it will be mostly complete by the end of 2023 – less than a full 0.25% tightening is priced in over the following two years. 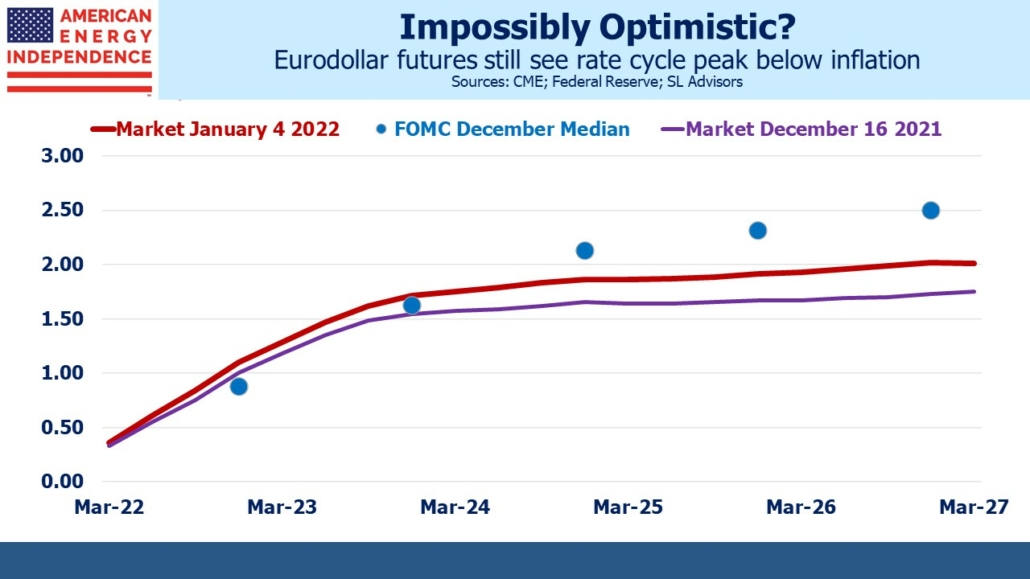 Eurodollar futures are still priced for Fed Funds to remain below 2% — implausibly optimistic, because it implies that the Fed will contain inflation without raising short term rates even to their long term inflation target. The FOMC’s guidance is 0.50% higher, and although they are awful at forecasting their own actions, this time perhaps the market will adjust to the Fed rather than the other way around as usually happens. Put another way, history suggests that inflation won’t get back to 2% unless the Fed raises rates above this level.

Part of the justification for equanimity over how high short term rates need to go has come from the bond market. In mid-December, ten year treasury yields were below 1.5%. Pushing short term rates above long term yields, creating an inverted curve, would provoke warnings that the Fed was about to cause a recession. An inverted yield has a mixed track record as a predictor of a slower economy, but it might be expected to give decision makers pause. 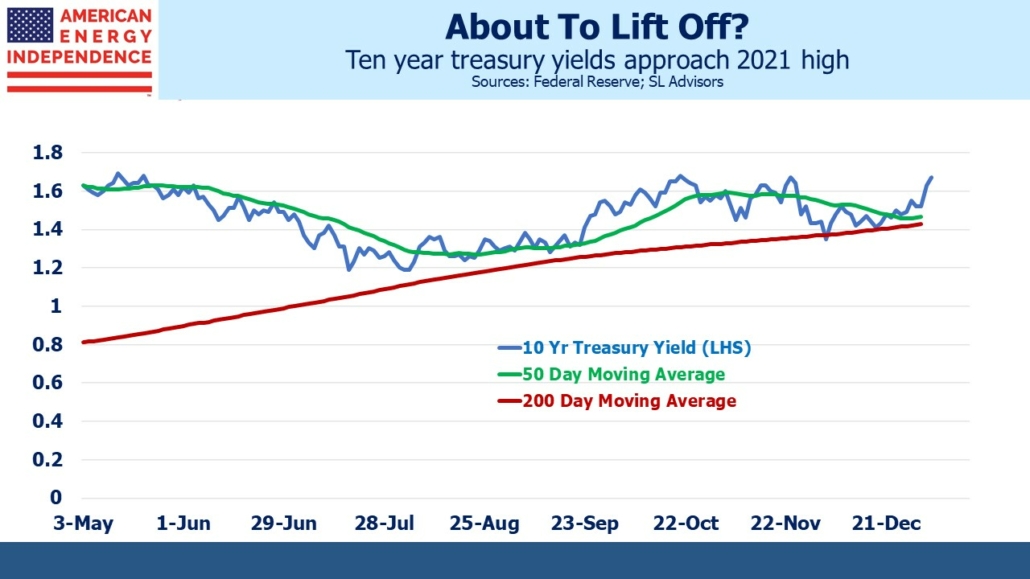 However, following the recent slump in the bond market, ten year treasury yields are within reach of last year’s 1.73% high. Maybe it’s a delayed reaction, but confidence about the Fed’s ability to bring inflation back down has been seeping away for a month. The continued fall in real yields has muffled the message somewhat, but ten year inflation expectations have risen 0.30% since the announcement of a speedier taper.

Employers are budgeting for wage increases of 3.9% this year, according to a survey by the Conference Board. Most analysts expect inflation to moderate, but bringing it back to 2% is looking less likely. The modest tightening projected by the market is unlikely to convince businesses to expect it, which would make ~4% annual wage hikes more likely to persist. 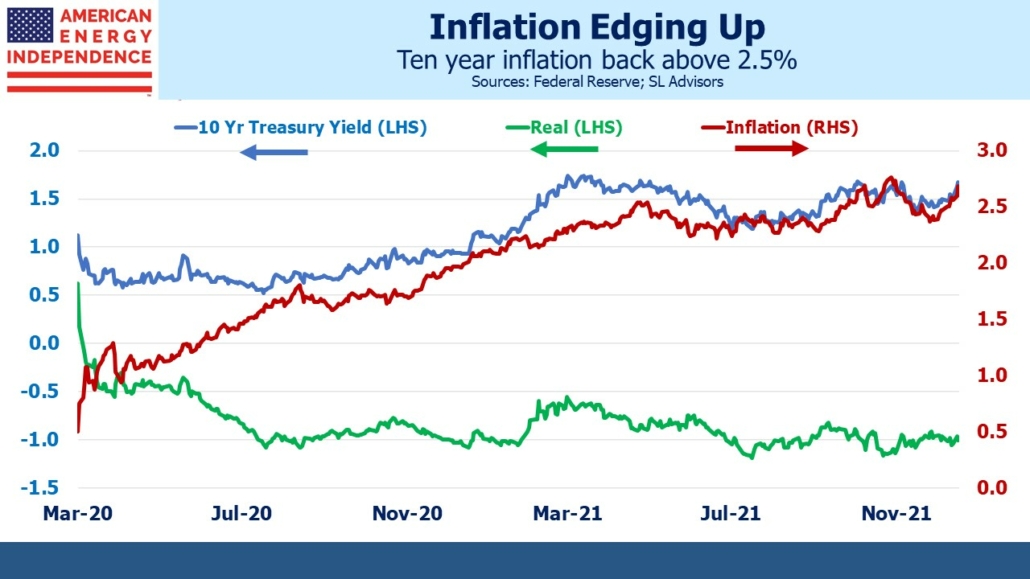 The Fed over-estimated the amount of slack in the labor market, a point chair Jay Powell began to concede during his press conference last month. They maintained a highly accommodative policy stance for too long in the hope that labor force participation would improve. They targeted a return to employment level of 152 million last seen in January 2020, before Covid hit. It’s still more than four million below that level, and since the Fed now emphasizes the “full employment” element of their twin mandate, they were willing to risk inflation to help those remaining unemployed people back to work.

The Fed has not given up, because their policy remains highly accommodative. A slower pace of buying bonds and near-zero rates do not represent hawkish policy. But they’ve belatedly recognized all the other signs of a tight labor market, such as 3.9% wage increases or the record 4.5 million Americans who quit their jobs in November.

“The important metric that has been disappointing really has been labor force participation,” noted Powell during his press conference. He cited, “factors related to the pandemic, including caregiving needs and ongoing concerns about the virus…”   Others were, “aging of the population and retirements” Three years of a strong market has probably helped many people retire ahead of time.

The rise in treasury yields is bearish. It reflects rising inflation expectations and implies a higher peak in the Fed Funds rate during this tightening cycle. At a certain point it is negative for stocks, since low rates have driven investors into equities for years. However, ten year yields would need to be approaching 3% not 2% for that to be a factor. And the pool of return-insensitive capital willing to own sovereign debt at negative real yields seems limitless, which is facilitating a degree fiscal profligacy that would otherwise be much more costly.

But it does mean that eurodollar futures 2+ years out below 2% remain too low. The Fed’s sloth-like return to neutral policy relies on the hope that inflation will moderate of its own accord, not that the Fed’s actions will cause it to. Much can go wrong with that. 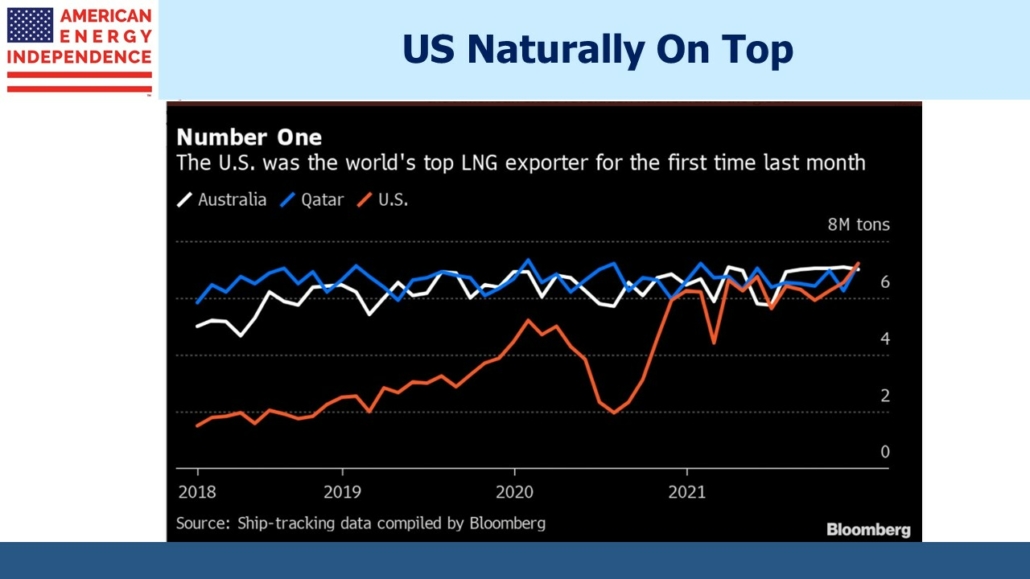 Unrelated to inflation but notable nonetheless was news that last month the US became the world’s biggest exporter of liquified natural gas.