Stocks Are Still A Better Bet Than Bonds

In late April, a month after the low, we noted how stocks were cheap (see The Stock Market’s Heartless Optimism). The Equity Risk Premium (ERP, the difference between the earnings yield on the S&P500 and ten year treasury yields) is a useful barometer of relative value between the two major asset classes.

Now that the market has made a new all-time high, capping the briefest bear market in history, it’s no longer cheap although still attractive by historical standards. The 2020 ERP is 3.4 and 2021’s is 4.1. 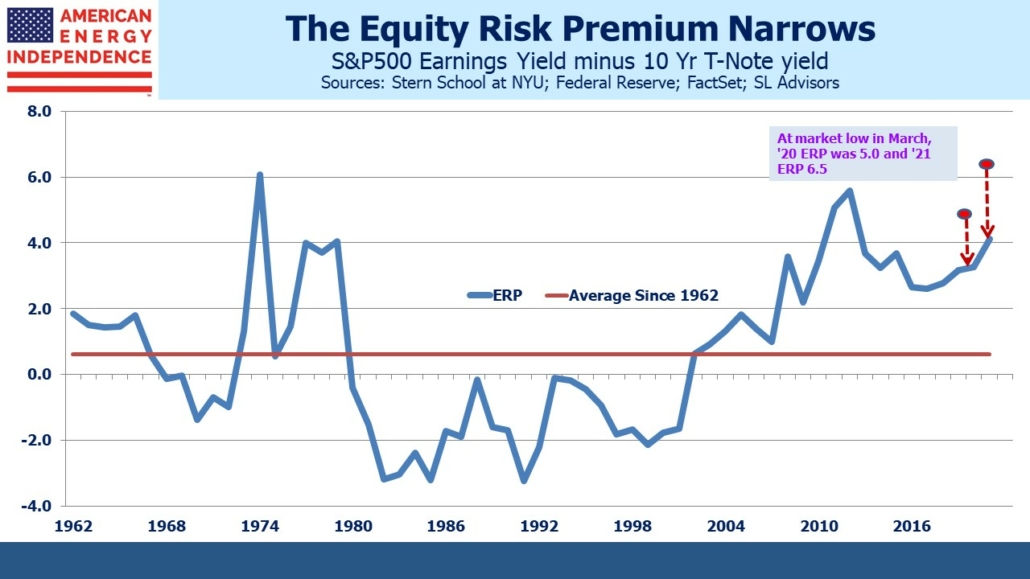 The rally has mostly been characterized by multiple expansion. No big stock epitomizes this more than Apple (AAPL), which has almost tripled in value since the beginning of last year. It used to trade at a low double digit earnings multiple – it’s now at 30X 2021 Bloomberg consensus earnings. At $2TN in market cap, AAPL is over 7% of the S&P500. 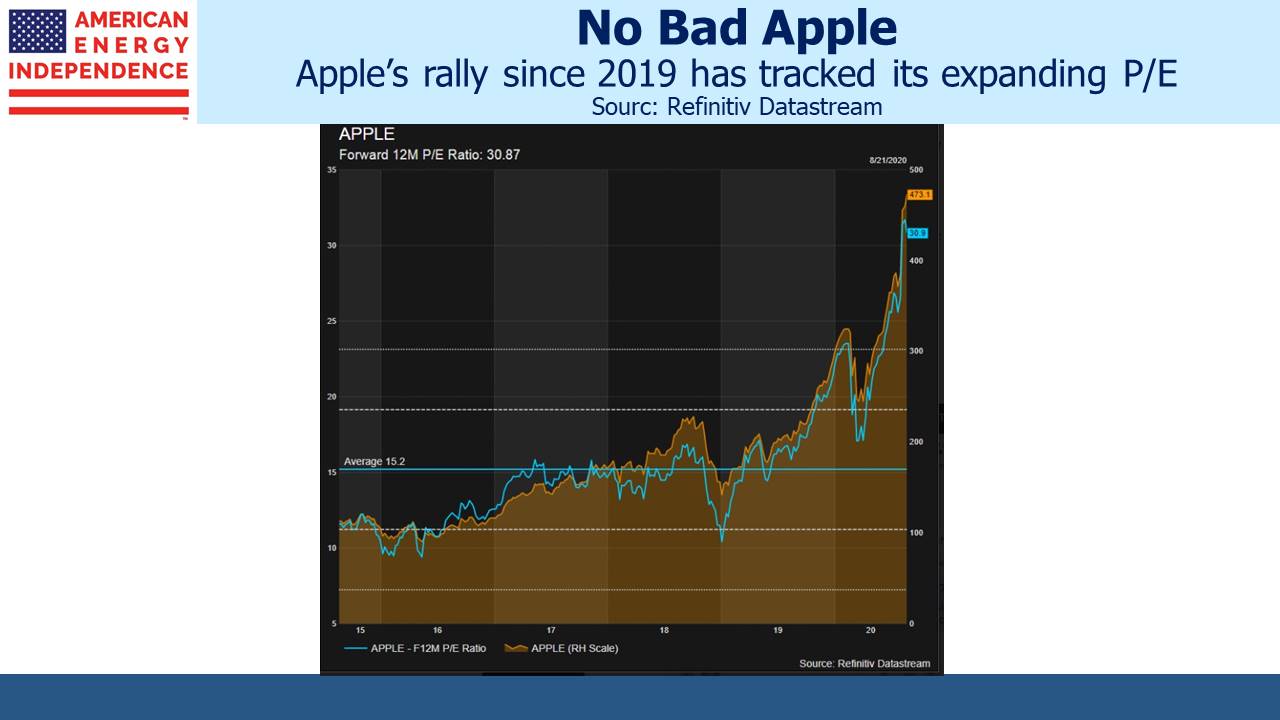 As 2021 earnings forecasts were revised down through the worst of the pandemic, they still never dipped below last year’s. In other words, even at the depths of Covid despair, the earnings story remained that this was a one year hit that would see profits quickly rebound to prior levels. 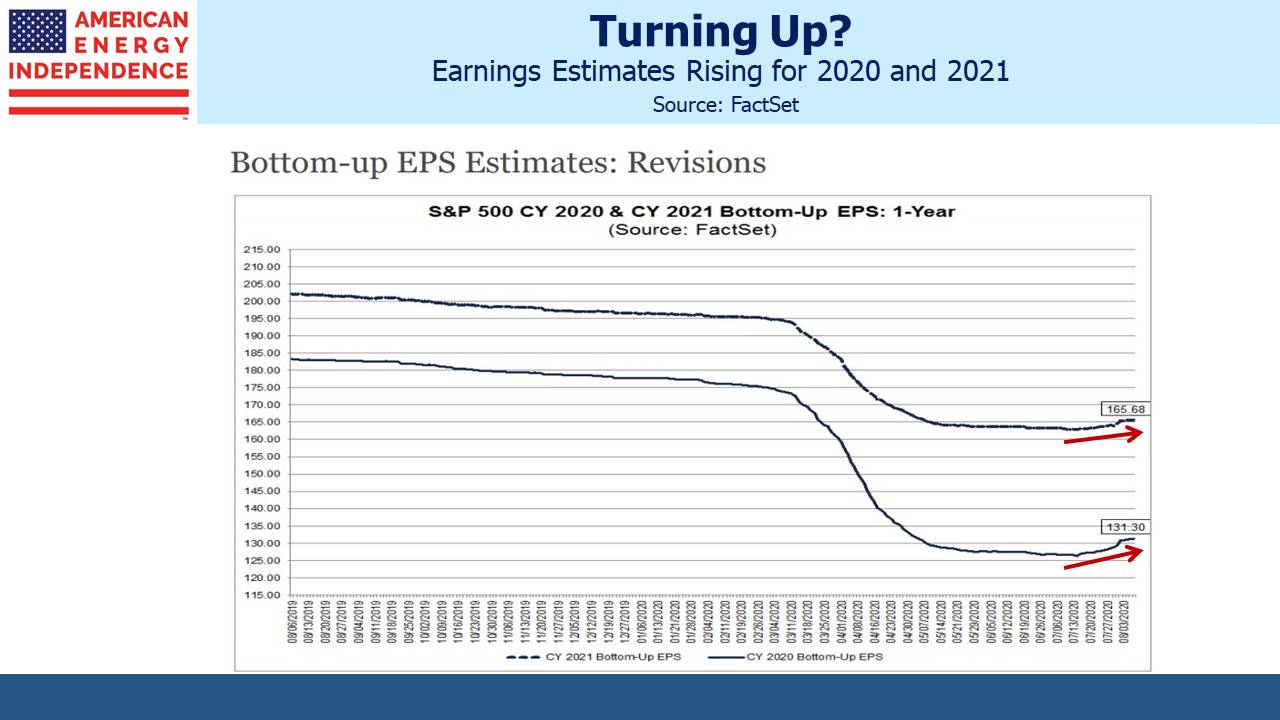 Earnings forecasts for the following year are typically most optimistic in January. As time passes they are usually revised downward, probably as cautious management guidance gets reflected in analyst estimates. This makes it easier to subsequently beat expectations. But in recent weeks, 2021 earnings forecasts have been revised up modestly. The improved profits outlook has more than offset cautious guidance.

Given the impact on our lives and the relentless media reports of death, the stock market has provided an almost offensively optimistic perspective (see Is Being Bullish Socially Acceptable?).

The ERP shows stocks to be cheap because interest rates remain so low. Stocks are cheap relative to bonds. In the past we’ve illustrated this by calculating how much money invested in stocks would deliver the same ending value as $100 put into ten year treasury securities. The dividend yield on the S&P500 is around 1.8%, 1.2% above the ten year. Dividends grow while treasury coupon payments do not, and dividends are also taxed at a lower rate – at least, for now. The result is that it takes a lot less than $100 invested in stocks to match a ten year bond, assuming stocks don’t wind up lower in a decade.

The contrast is especially stark when applied to pipeline stocks. Enterprise Products Partners (EPD) maintained its payout through the 2014-16 energy downturn and, so far, through the Covid pandemic. Its dividend provides a 9.7% yield, a level that might suggest a high degree of investor concern about their prospects. However, bond investors see little to worry them. EPD recently issued ten year notes that currently yield 1.9%. A 30 year bond issued at the same time yields 3.3%. 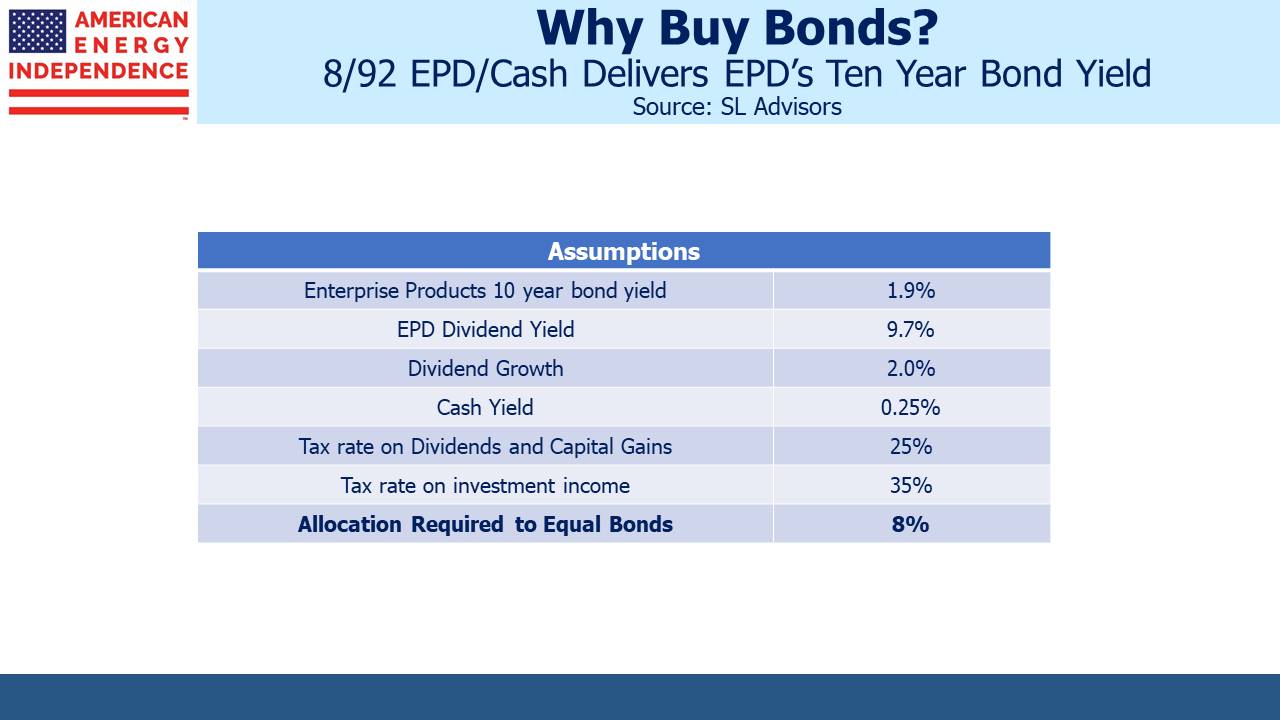 Using the assumptions in the table, an investor about to commit $100 to EPD’s ten year debt could instead put just $8 into EPD common shares with the rest in cash (i.e. treasury bills), and achieve the same return. Even in a highly improbably EPD bankruptcy, a loss on the bonds of greater than 8% would still leave the equity as the less risky choice.

This math reflects the tyranny of low rates, and has been driving investors into stocks for years. Inflexible investment mandates that require holding bonds without regard to return are keeping rates low. The stocks in the American Energy Independence Index, of which EPD is a component, yield 8.8%. For those with sufficient flexibility, the stocks of these issuers are far more compelling than their bonds.