Drilling Down on Energy Value with Jeff Waters

In this week’s podcast, Simon Lack explains why Democrats are partly to blame for high energy prices

Europe’s realization that it needs a strategy to ensure energy security has provided a further boost to US natural gas stocks. Last week was especially good – NextDecade (NEXT) added another customer for their proposed Rio Grande Liquefied Natural Gas (LNG) export facility.

By coincidence we had just interviewed Matthew Mott, SVP of their Next Carbon Solutions division. President Biden also committed to increase US LNG shipments to Europe by 15 Billion Cubic Meters (BCM), equivalent to 1.45 Billion Cubic Feet per Day (BCF/D). US natural gas was already cheap, abundant and the biggest source of global CO2 emissions declines to date (see NextDecade Sees A Bright Future). Following Russia’s war on Ukraine, it is now part of Europe’s energy security too. 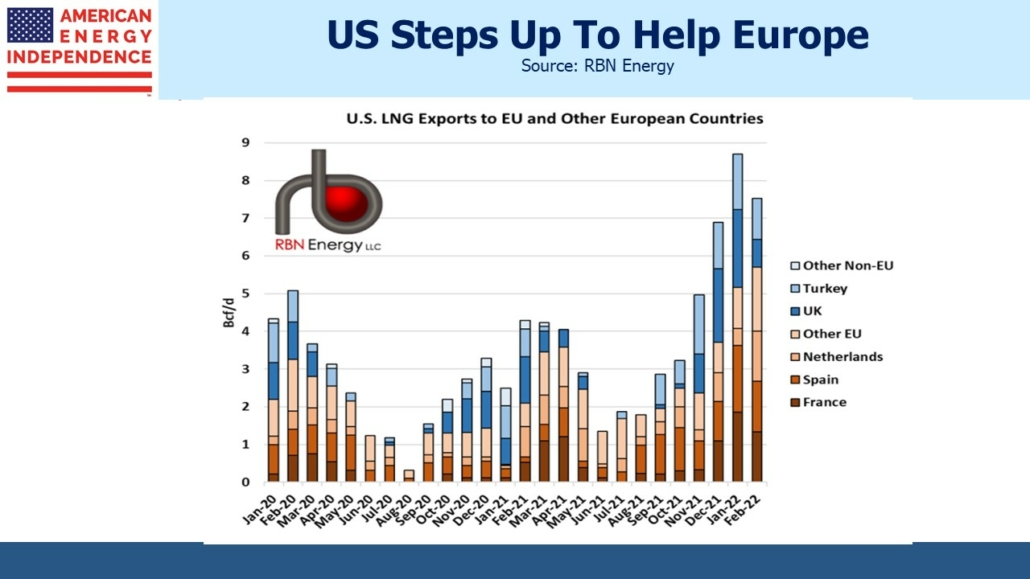 Biden’s commitment grabbed headlines but his advisers will know that on current trend 2022 US LNG exports to Europe will already exceed last year’s by more than 15 BCM. LNG facilities take years to build, which provides visibility into how fast our export capacity will grow. Germany has no regasification facilities at which to receive LNG, and the most optimistic forecasts are for one to be in service by the end of next year. The market for Floating Storage and Regasification Units (FSRUs) is suddenly hot because only a handful are available and they offer Germany a faster route to importing LNG. But not all will operate in the frigid waters off Germany’s north coast. Energy security went from irrelevant to critical in Europe. Getting there won’t be elegant. 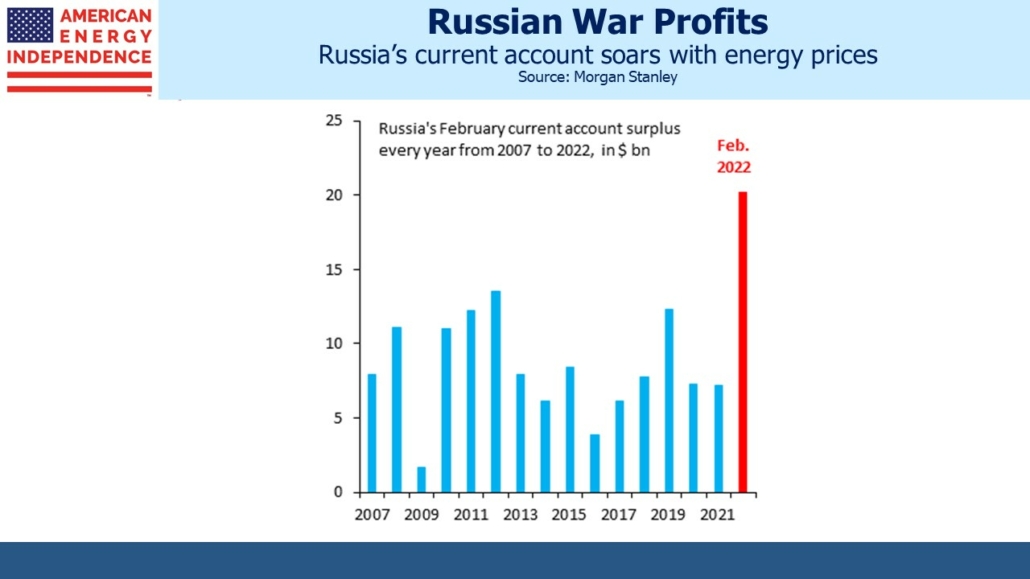 Nonetheless, the German government hopes to be no longer reliant on Russian gas imports by the summer of 2024. So far it’s been in both Germany and Russia’s interests to maintain the flow of oil and gas. Germany has no near-term alternative, and Russia is enjoying the higher prices that their invasion has precipitated.

Russia is on notice that it will need to find alternative markets for the gas Germany will no longer want. That will require Russia to build new pipeline infrastructure, likely to their east coast for export as LNG. Western sanctions may impede the timely construction. Since the break in trade between the two countries is so well anticipated, Russia’s history suggests the timing will ultimately be at their choosing and not necessarily when Germany is ready to cut imports entirely. 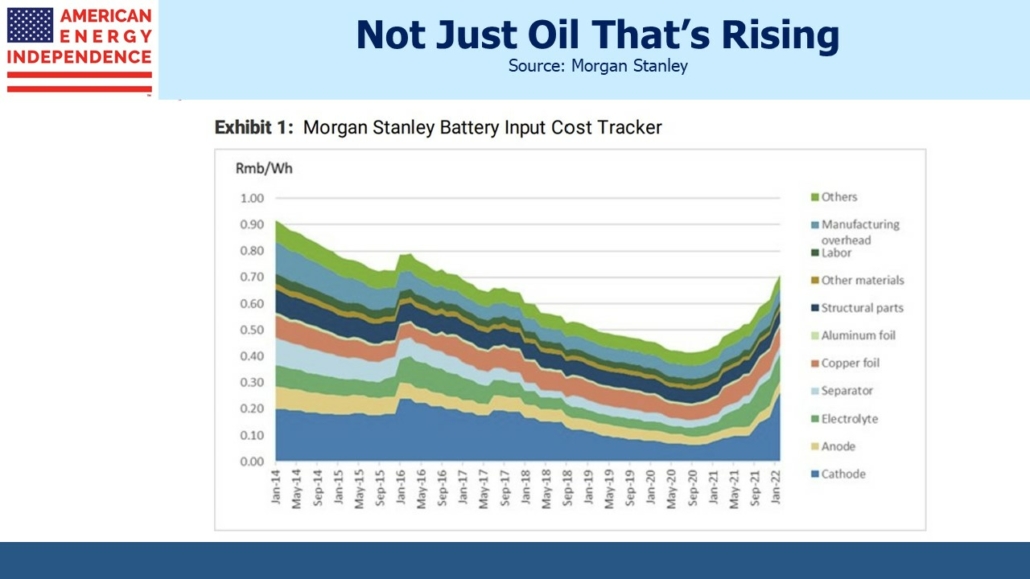 It’s not a leap to suggest that energy security for any country requires minimizing pipeline imports, since they create dependence on a single supplier that seaborne imports avoid. LNG trade is going to keep growing. And while increased investment in renewables is a natural move to improve security, their input prices are rising too.

US LNG trade is all run by commercial entities. Although Biden’s commitment drew attention, the Federal government isn’t about to get into the natural gas business. More meaningful would be an improved regulatory process that isn’t beholden to the liberal progressive wing of the Democrat party. Hewing to their anti-fossil fuel rhetoric has jeopardized Democrat control of the House in November – gasoline prices were already rising before Russia’s invasion. There are signs the Administration is tilting (pivoting would be too strong) towards a more balanced view of the energy transition.

For example, FERC recently shelved an earlier proposal to include the emissions ultimately generated by the oil/gas passing through any proposed pipeline they were considering for approval. This could even have applied to projects already under construction. Conveniently, last week this led to certificates being approved for two natural gas pipelines (the Evangeline Pass Expansion and Columbia Gulf Transmission’s East Lateral Xpress) that link up to Venture Global’s Plaquemines LNG export facility, among others (see Baby, I Got It – Could The U.S. Alone Meet Biden’s Call For 15 Bcm More LNG To The EU?).

The stalled Mountain Valley Pipeline (MVP) project run by Equitrans is another example where the Administration could signal a more enlightened policy. While courts can rescind previously issued permits from Federal agencies that were the basis for $BNs of invested capital, energy companies will correctly assess a hostile environment for new projects. Fixing this might require legislation, but like the Keystone XL pipeline that Biden canceled immediately upon taking office, capricious policy has its costs. 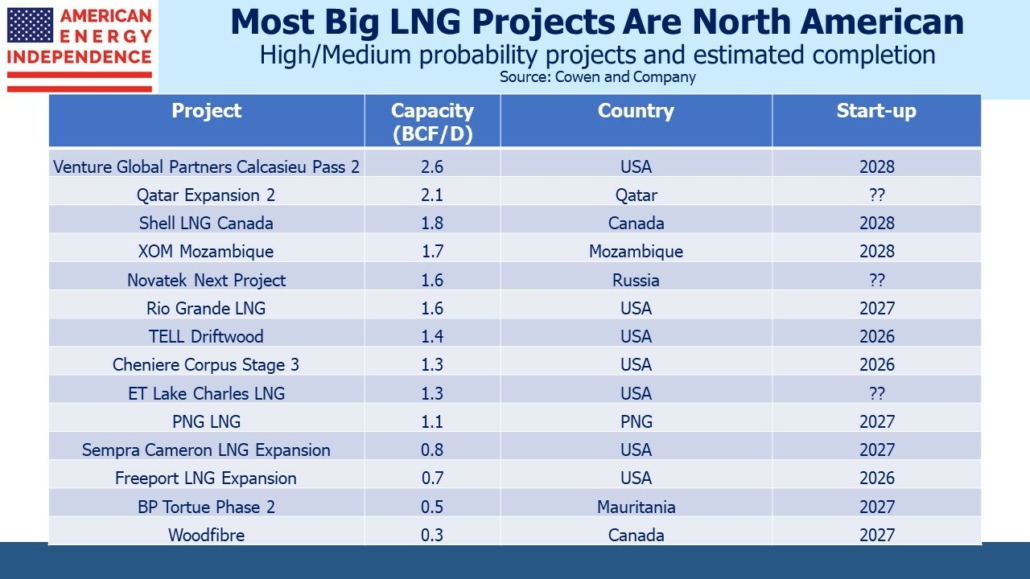 The path to increased LNG exports is visible but long. Because it typically takes up to five years from Final Investment Decision (FID) to start-up, it’s possible to project out export capacity well into the future. Of 18.9 BCF/D in projects deemed “High/Medium probability” by Cowen and Company, 11.9 BCF/D are in North America. Russia’s Novatek project may struggle to complete because of western sanctions. 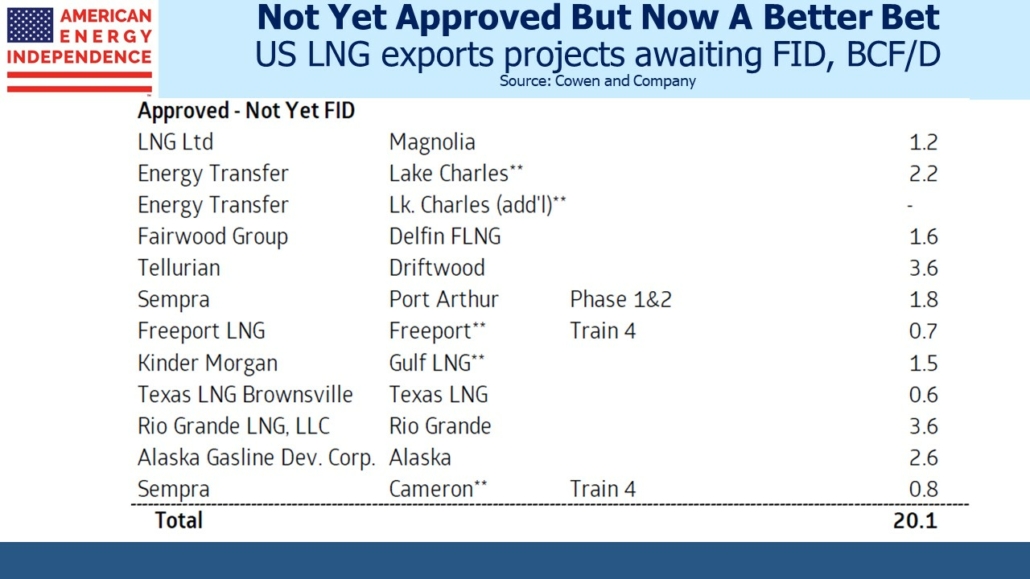 Of the 20 BCF/D in US projects awaiting FID, only 6 BCF/D are on the High/Medium Probability list, whereas we think most if not all of these will eventually be done. 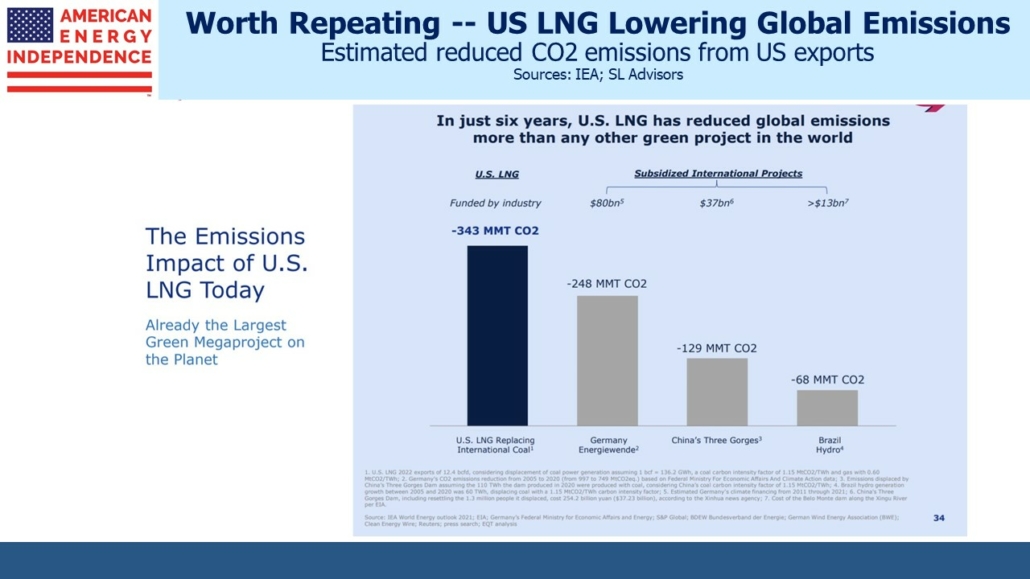 Europe’s energy security and US LNG profitability are now more closely linked. What remains to be seen is whether Administration policy will pragmatically move from a tilt to a pivot away from its extremist liberal wing. So far US LNG has done more to reduce global emissions than anything else.

This week’s podcast is an interview with Michael Mott, SVP at Next Carbon Solutions, a division of NextDecade.

Following our podcast taping, NextDecade announced a 20 year Liquified Natural Gas (LNG) export agreement with Guangdong Energy, a Chinese utility. NextDecade stock soared as the whole US LNG sector responded positively to increasing demand, most notably from Europe. The podcast is longer than usual – around 30 minutes – but very timely.

In this week’s podcast, Simon Lack discusses the holes in Democrat energy policies

In this week’s podcast, Simon Lack discusses the conflict between progressive climate policies and energy security

In this week’s podcast, Simon Lack explains why MMT has failed

Episode 87: The New Outlook For Energy

In this week’s podcast, Simon Lack discusses the new outlook investors have on the energy sector

In this week’s podcast, Simon Lack discusses interesting comments from Elon Musk’s on the energy transition