Send in the Canadians!

August 2014 was the peak in the U.S. energy sector, as long time investors know too well. The Alerian MLP Index remains down by more than a third, and larger firms are increasingly abandoning the structure to become regular corporations (“C-corps”). The Shale Revolution has tested the old model of paying out 90% or more of cashflow. It worked when growth opportunities were limited, but nowadays every MLP has identified profitable areas in which to invest. Secondary offerings, how growth is financed, have found MLP investors to be unenthusiastic about reinvesting their dividends. This has in turn depressed MLPs as they’ve issued equity to unwilling buyers in order to finance their growth plans.  “Simplification” which generally involves conversion to a C-corp with adverse tax consequences for existing MLP equity holders, allows access to a far broader set of investors. The hope is that they’ll be more willing to finance the growth opportunities presented by the Shale Revolution.

Given the resurgence in U.S. hydrocarbon production in recent years, weakness in the sector that provides transportation, processing and storage was not inevitable. The famous “toll-model” of MLPs should have simply meant that more volumes meant more tolls. One might have expected the exploration and production companies to over-reach in their giddy search for more fossil fuels. There’s a good reason for the old saying, give an oilman a dollar and he’ll drill a well. We’d add, give a pipeline operator a dollar and he’ll build another pipeline. MLPs have often sought growth with irrational exuberance. Rising leverage, distribution cuts and broken promises followed. Many concluded that the MLP model was broken; in fact, the MLP model was fine but not suited to financing a growth business. Energy infrastructure used to be synonymous with MLPs, but so many have abandoned the structure that the Alerian MLP Index is no longer representative. 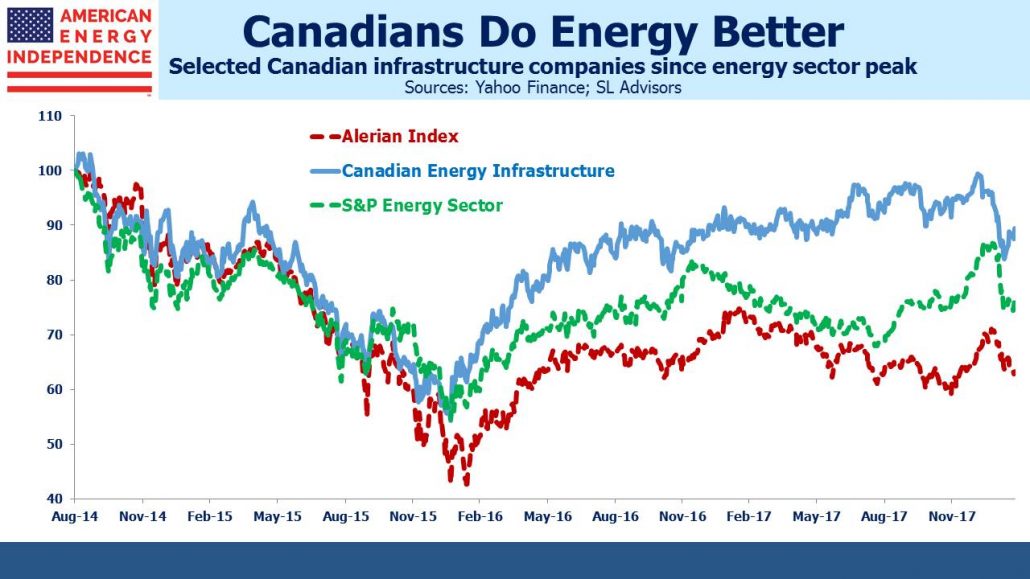 Canadian energy infrastructure companies have been run differently, and the chart above shows how the three largest firms (Enbridge, Pembina and TransCanada) have outperformed their U.S. peers. During the 2008 financial crisis, conservative management of Canadian banks generally helped them avoid the excesses that plagued some large U.S. ones. The same Scottish Presbyterian cultural roots appear to have similarly protected Canadian energy companies.

Canada doesn’t have MLPs, so Canadian energy infrastructure businesses are organized as conventional C-corps. Comparing the three Canadians with their U.S. U.S. C-corp peers, their leverage (Debt/EBITDA) is in line at around 4.9X. On an Enterprise Value/EBITDA (EV/EBITDA) basis, they’re slightly higher than the median U.S. C-corp at 13X versus 12X. And they’re expected to grow their dividends at around 10% this year.

The big difference is that the Canadians have achieved this without becoming over-leveraged, with the consequent cutting of dividends. Some U.S. MLPs converted to C-corps, in effect cutting payouts by merging with their C-corp GP. Others, such as Kinder Morgan three years ago, simply cut. Broadly speaking, Canadian management teams have behaved more conservatively and been more mindful of commitments made to their dividend-seeking investor base. With few exceptions, American managements have not.

The Shale Revolution has been a U.S. phenomenon; Canada has very little such activity, with its oil production centered on tar sands, a more expensive process that requires the same type of long-term capital commitments as the conventional oil business. But the North American pipeline network is highly integrated. Enbridge (ENB) demonstrated this by acquiring Spectra Energy two years ago, greatly increasing their U.S. network in the northeast. TransCanada (TRP) purchased Columbia Pipeline Group in an all cash deal, gaining a leading natural gas position in the rapidly growing Marcellus and Utica that links all the way down to the Gulf Coast. Not to be left out, Pembina (PBA) combined with Veresen, expanding their Bakken presence and gaining exposure to the U.S Rockies. So Canadian firms have been expanding their U.S. operations, but their greater financial discipline has enabled them to avoid imprudent growth. PBA in their most recent investor presentation on Slide 18 lists “Financial Guard Rails” which includes 80% of EBITDA from fee-based sources and maintaining an investment grade rating.

American management teams have been more risk-oriented in reaching for growth, and the results have largely fallen short of expectations. Last April, undaunted by not having $1.5B, NuStar Energy (NS) spent $1.5BN to acquire Navigator Energy’s Permian oil infrastructure network. In their 4Q17 earnings call management commented that Navigator’s EBITDA contribution was $14.5M for the quarter, yet they expect to spend another $240M building it out in 2018.  Hence the continued need for additional capital. Recently NuStar duly merged their General Partner with their MLP (simplified), which led to a distribution “reset” (cut). They sought growth over stability, and so far have achieved neither.

NS was simply one of the most recent in an ignominious history of American energy businesses that have failed to achieve what they promised. Kinder Morgan led the way in 2014, when they chose their growth plans over continuing stable distributions. Williams Companies (WMB), Plains All American (PAGP), Targa Resources (TRGP), Semgroup (SEMG) and Oneok (OKE) have all diverted cash from investors to new projects. Macquarie Infrastructure (MIC) remains the most brazen. As we noted in a recent blog post (Canadians Reward Their Energy Investors), when the company recently slashed its dividend after raising it the prior quarter, the CEO said it was necessary in order to pursue their growth agenda.

Warren Buffett was on CNBC the other morning, and when Becky Quick asked him if Berkshire would consider paying a dividend, he replied, “…dividends have the implied promise that you keep paying them forever and not decrease them..” U.S. energy infrastructure managers clearly feel differently.

Canadian energy infrastructure businesses have outperformed their U.S. peers because they’ve remained true to their original investors. They haven’t pursued imprudent growth, and they haven’t forgotten why their investors own their stock. MLP investors can no longer rely on a security’s yield because it’s become standard market practice to cut it either directly, or indirectly through a simplification. The older, wealthy Americans who were the quintessential long term MLP investor are gradually being replaced by institutions, because C-corps are an increasing portion of the energy infrastructure sector. Canadian firms are among the best managed, and so far they’ve been more adept at exploiting the Shale Revolution than U.S. firms.

This is why we created the American Energy Independence Index. By including Canadian companies and limiting MLPs to 20%, it’s more representative of U.S. energy infrastructure as well as conducive to being tracked by tax-efficient funds. The good news is that if American firms start being run like the Canadian ones, they could see a valuation uplift. The broad energy sector is out of favor, and given the positive tailwinds of growing North American oil and gas output there’s certainly plenty of upside. But the original MLP investors are unlikely to participate – they’ve been too badly let down. This remains the simplest and most plausible explanation for continued weakness. February was the worst month since January 2016, following which a strong rally ensued. Valuations, fundamentals and sentiment are sufficient to cause a repeat.