History is about people, and personal connections always add interest. On hearing we’d be visiting Charleston, SC a good friend, Austin Sayre, suggested we stop by his family’s ancestral home. The Colonel John Stuart House is in Charleston’s historic district, where many of the homes have a plaque describing their former owner’s significance. Colonel Stuart is one of Austin’s ancestors.

The plaque and Wikipedia together describe Colonel John Stuart, a Scottish rebel who later represented the British government in dealing with Native Americans. Born in 1718 in Inverness, he arrived in Charleston in 1748. During the Revolution, his loyalty to the British crown meant he had to flee Charleston, and his house was confiscated. Stuart died in Pensacola, FL in 1779. The British Commander-in-Chief in North America, General Sir Henry Clinton, lamented, “The loss of so faithful and useful a servant to His Majesty.”

Charleston is a beautiful old city. Dozens of fine homes in the historic district have been restored, and it’s absorbing to stroll among them while reading about the lives of former residents. The water front is picturesque, and is best experienced on foot wandering down the narrow streets. The city also provided our first meal out in three months (see Having a Better Pandemic in Charleston, SC).

There’s more to the story. John Stuart didn’t just sail for the new world in search of opportunity. He was fleeing for his life. In 1745 Charles Edward Stuart (“Bonnie Prince Charlie”) led the Jacobite rebellion, which sought to overthrow King George II in favor of Bonnie Prince Charlie’s father, who was waiting in France. John Stuart, clearly of the same clan and therefore related, joined the uprising. It was put down at the Battle of Culloden in 1746, where the English won a decisive victory. 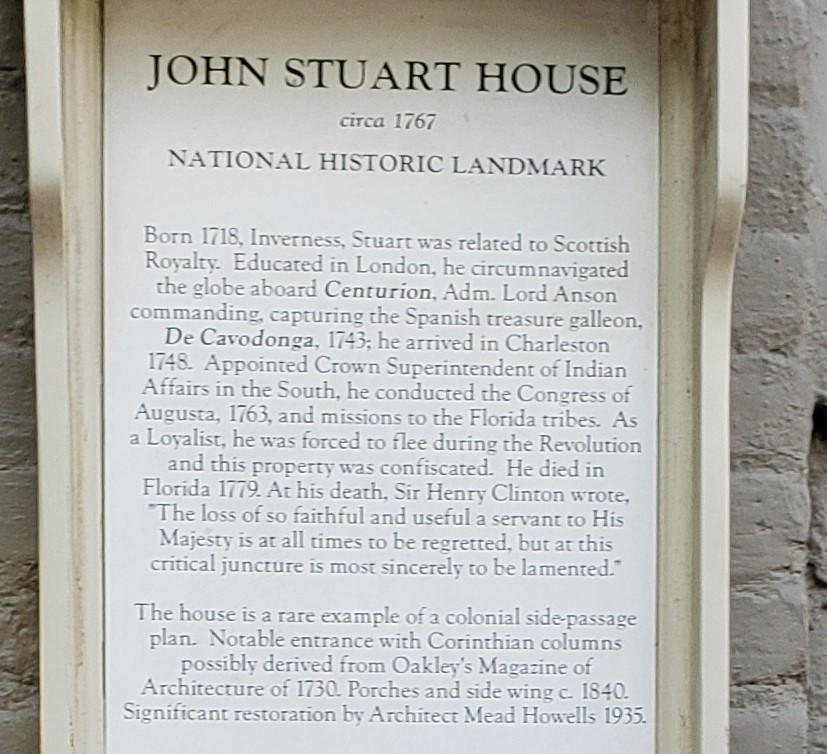 What remained of the Scottish army returned to their homes in the Scottish highlands. But King George II sought revenge against the treasonous officers who had led the uprising. John Stuart was wanted, and likely faced execution if caught. He and his brother Francis left Britain, on a ship that brought them to Charleston. There, John Stuart eventually built the house we had visited, and his descendants ultimately included Austin Sayre.

Incidentally, the TV series Outlander portrays the events around Culloden, including the battle, in a number of gripping episodes.

I contemplated this historical vignette and my connection with it. Part of it didn’t add up. John Stuart had gone to war against the British Crown in 1746, following which he had fled the country. Just 14 years after Culloden, we find Captain John Stuart in the local militia fighting the Cherokee Indians.  He was captured, but later released in exchange for a ransom.  In 1762, Stuart’s familiarity with Native Americans led the British to appoint him Crown Superintendent for Indian Affairs in the South.

During the Revolution, John Stuart’s loyalty to the Crown forced him to flee again, this time from Charleston. Why did this former rebel later pledge fealty to the king?

I asked Austin, who shared the story passed down to him through his family. King George II died in 1760. He was succeeded by his grandson, George III, whose father, Frederick, Prince of Wales, had died in 1751 of a lung injury. Sometime after George III’s accession, John Stuart and his brother Francis sought a royal pardon from the new king. George III was looking for friends in the colonies, and was perhaps also influenced by John Stuart’s service in the 1759-61 Anglo-Cherokee war.  Both brothers were pardoned. This is why the Scottish rebel spent his later years as a loyal subject. What a fascinating twist!

Francis subsequently returned to Britain, but John remained in Charleston until the Revolution. He built his house between 1767 and 1772, by which time he was Colonel John Stuart.

It’s an obscure piece of history. The story was made real for us through visiting the home once owned by our friend’s ancestor, and supplemented with additional information. Charleston felt closer to Britain than does everyday life in New Jersey, because its early history is so vividly British. Our shared histories are why, for this Brit, America has so easily been home for 38 years and will be for the rest of my life.

I am descended overwhelmingly from English stock – my ancestors might even have been on the opposing side at Culloden, although Austin Sayre is too much of a gentleman to retain a grudge. Colonel John Stuart no doubt lamented the 1776 Declaration of Independence, but Austin and I agree that Britain’s loss was the world’s gain. We are a great country navigating a tough patch. We’ll make it to the other side. We always do.