Although Russell Gold’s The Boom: How Fracking Ignited the American Energy Revolution and Changed the World is now almost five years old, it still provides a relevant commentary on America’s Shale Revolution. Unlike many other chroniclers of America’s energy renaissance, Gold managed to obtain an invitation to see first-hand how drillers unlock hydrocarbons from shale. We already know it’s a noisy, dirty process that’s highly disruptive to the local community. But we also learn about the intersection of science with the brute force required to fracture the rock holding the commodity. Huge trucks carrying water and pump trucks converge on the drilling site. Inside the trailer where technicians control the process, “The computers, the headphones, and the focused faces make the van feel a bit like a NASA command center.” But they’re still oil sector workers, so better resemble a NASCAR pit crew working at NASA. 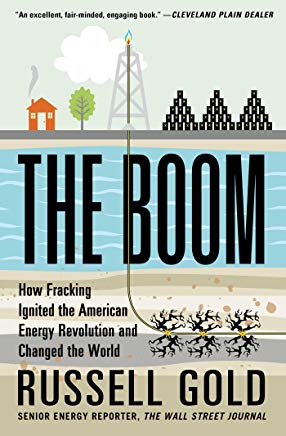 Gold highlights Shale’s huge benefits to the U.S. Oil companies have known for decades that impenetrable source rock held enormous reserves. Early efforts at fracturing it used high explosives, and in the 1960s there was serious discussion about using nuclear bombs. Between 1969 and 1973 several nuclear devices bigger than the one dropped on Hiroshima were detonated underground to release natural gas. Subsequent production wasn’t impressive, and poor economics as well as environmental concerns soon ended such efforts.

The author balances the positives with concerns about drilling’s local environmental impact, as well as the continued use of fossil fuels. He concludes that increasing natural gas use is the preferred outcome because it displaces far dirtier coal plants for electricity generation. In time, like many observers, he expects renewables to dominate, but that’s still likely decades away. Battery storage continues to be a significant hurdle to relying on intermittent sources of energy such as solar and wind. Bill Gates noted this in a recent blog, writing that, “…solar and wind are intermittent sources of energy, and we are unlikely to have super-cheap batteries anytime soon that would allow us to store sufficient energy for when the sun isn’t shining or the wind isn’t blowing.”

It turns out oil is a fantastically efficient form of energy storage. A memorable illustration comes from a speech by Steven Chu, former U.S. Energy Secretary under Obama. In comparing different materials for their energy density per unit of weight, or volume, he noted that, “The most efficient energy sources were diesel, gasoline and human body fat” (italics added). Apparently, an ample girth has energy storage capabilities to which battery developers aspire in their labs. Chu added that a battery holding a comparable amount of energy would require eighty times more space and weight. This was back in 2010, but today’s best batteries still don’t come close.

Gold identifies privately owned mineral rights as a crucial difference between America and the rest of the world. Although English Common Law underpins the U.S. legal system, sovereign ownership of what’s underground is one attribute that happily didn’t cross the Atlantic. The sharing of wealth with the community where drilling takes place is an important pillar of support. In 2014 when The Boom was published, fifteen million Americans lived within a mile of a well that had been fracked within the past few years. Today’s it’s certainly more. Although proximity produces supporters and opponents, generally fracking happens where it’s welcome, which is as it should be. Since Gold’s initial interest in the subject was due to Chesapeake buying drilling rights on his family’s farm, his perspective is well informed.

The rise and fall of Aubrey McLendon, late founder of Chesapeake, take up two chapters. McLendon was a colorful character who thought big and took the industry to higher gas production than would have happened without him. The Boom was published before McLendon’s fiery death in an automobile accident. It looked like suicide, occurring in March 2016 when the energy collapse was straining his high risk business strategy, but was later ruled accidental.

It’s also interesting to learn about the career of George Mitchell, often called the father of fracking. Mitchell’s persistence with unlocking shale reserves where others had given up is now industry legend.

The Boom deserves a place on the bookshelf of anybody interested in learning more about the Shale Revolution.