Five years ago Russell Gold published The Boom: How Fracking Ignited the American Energy Revolution and Changed the World, one of several books that chronicled the Shale Revolution. Gold provided first-hand descriptions of fracking after persuading Marathon Oil to let him visit a site in North Dakota. He offers a fascinating description of the process that has transformed America’s energy production. We reviewed his book here. Gold displays his green credentials as he wrestles with the tradeoffs he perceives between abundant natural gas and the renewables growth it impedes. But on balance, he concludes that Shale has been good for America. 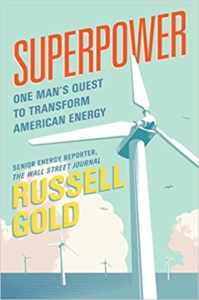 Russell Gold’s latest book, Superpower: One Man’s Quest to Transform American Energy seems at first to challenge the supremacy of the Shale Revolution and America’s energy renaissance. It follows Michael Skelly in his quest to harness wind power across the south eastern U.S. to provide electricity.

Gold recounts the early use of electricity, back in 1881 when J. P. Morgan’s New York townhouse was one of the first installations. The house was lit every day at 4pm, powered by a coal-burning steam generator whose noise and smoke upset the neighbors.

Highlighting the advantages of wind power may have been Gold’s intent, but after following Michael’s Skelly’s frustrating and ultimately unsuccessful attempt to transform power generation, this reader found the challenges more substantial than the opportunity.

The impediments Michael Skelly encountered were not technical. Texas produces a quarter of America’s wind powered electricity. On March 17, 2017 50% of all the electricity used in Texas came from wind. Renewables such as solar and wind suffer from intermittency (i.e. it’s not always sunny and windy). This can play havoc with grids juggling multiple sources of power. But ERCOT, the grid that covers Texas, has figured out how to maintain consistent power while allowing wind to increase its share beyond what many thought possible.

Size brings economies of scale, but with it comes concentrated power generation in wind areas with delivery over hundreds of miles of high voltage lines to those than need it. Skelly’s vision was to invest in extensive, large windmills that would sell their power across several states. But erecting huge electricity pylons to connect with users generated local opposition that often proved insurmountable.

Michael Skelly’s company, Clean Line, applied to Arkansas to operate as a public utility, since his fledgling company needed to build power lines linking Oklahoma and Tennessee. Back in 1935, Arkansas Power had been granted a monopoly by the state in return for building out the state’s grid.

It was a cleverly designed Catch 22 type regulatory structure designed by then-CEO of Arkansas Power, Harvey Couch – in order to be granted a public utility license, a company had to be a utility “owning or operating” power equipment serving customers. But you couldn’t be a utility without first having customers. The legislation had never contemplated the entry of a new company into the state’s power business. Nonetheless, the Public Service Commission denied Clean Line a license. The beneficiary was Entergy Arkansas, a descendent of Arkansas Power.

Clean Line’s frustration in Arkansas showed the fragmented nature of the U.S. electricity grid. Although it operates as three regions covering the eastern U.S., western U.S. and Texas, in reality each state approves local construction. Utilities in Oklahoma opposed Clean Line’s plans to construct transmission lines across the state, relying on a similar statute.  Whereas the Federal Energy Regulatory Commission oversees inter-state pipelines, there is no equivalent Federal agency responsible for inter-state transmission lines.

Political opposition arose in surprising places. Tennessee senator Lamar Alexander, who might have been expected to favor clean, cheap wind power for his state, instead came out publicly against the “…giant fifty-story wind turbines that they want to string along the Appalachian mountaintops…” Alexander had also opposed offshore wind turbines that threatened the view from his home in Nantucket.

Superpower sets out to show that technology exists, and that entrenched interests are the only barrier to far greater use of wind power. This glass half full interpretation sits alongside the half empty one – large scale construction of wind turbines and the high voltage power lines to connect windy, remote regions with population centers faces endless NIMBY opposition and barriers from entrenched interests. Arkansas didn’t care to allow power lines moving clean energy across its state with little in-state benefit. Wind power clearly works, as Texas has shown, and will continue to grow. Despite passionate employees, hundreds of millions of dollars and a decade of work a single HVDC line couldn’t even connect economic wind power from Oklahoma to Tennessee. The institutional barriers, large required investment in physical infrastructure and local opposition mean a national grid is unlikely to replicate the U.S. pipeline system anytime soon.

Superpower is an absorbing read, and well worthwhile to anyone interested in the development of renewal energy.