Our blog post on Sunday, Why Goldman Unsurprisingly Avoided Archegos Losses drew a wide range of comments, both on social media and via direct emails to me. Many observers dislike Goldman – their continued success and adept avoidance of mistakes made by others leads to grumbling of sharp practice. I recounted an experience of my own from 1998 when hedge fund Long Term Capital Management (LTCM) collapsed. Former colleagues with whom I’ve remained friends recall that episode similarly. But it was a long time ago and is only one event. 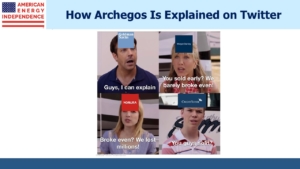 Another former JPMorgan colleague, lamenting the lost code of honor that he recalls existed in banking, described being the victim of a collateral grab of dubious legality later in his career at another firm. The perpetrator was JPMorgan. Reputations vary among big banks, but they’ve all written hefty checks for regulatory or legal failings.

While there’s a popular cynicism towards Wall Street with Goldman regularly in its crosshairs, finance professionals who have done business with them hold a more nuanced view. Some will report a negative personal experience, but grudging admiration is more common. One recalled Goldman “breaking norms” when he was liquidating bond positions related to the Drexel Burnham bankruptcy in 1990, but also regrets not accepting a job there almost two decades later. I suspect the vast majority of critics would jump at the chance to work at Goldman.

My intent with the blog post was to highlight Goldman’s skill in extricating themselves from a situation far more elegantly than their peers. The previously estimated $3-4BN loss at Credit Suisse has turned out to be $4.7BN. Several senior executives have lost their jobs as a result. Avoidance requires good systems to understand the exposures, but also good judgment on what to do. Goldman has both.

“Any sufficiently advanced technology is indistinguishable from magic.” was the comment from one individual better informed than most on this episode. Maybe to Credit Suisse and Nomura that’s how it looked. Another comment was that when a client doesn’t return calls asking for margin, it should be clear what to do next. Not all risk management is high tech.

Most controversial was the suggestion that Goldman is willing to take some legal or regulatory risk depending on the circumstances. This resonated with many outside observers.

Warren Buffett once said that if you follow anyone around all day long you’ll eventually find them doing something wrong – even if it’s failing to completely stop at a stop sign. I have been pulled over for this in Naples, FL, but was let off with a warning by a typically friendly Naples patrolman. I maintain that it’s simply an excuse to search for drugs or guns, whereas my wife thinks I should drive properly.

One respondent in a position to know rejected my suggestion that Goldman regards taking legal/regulatory risk as sometimes acceptable depending on the upside. He believes they are more conservative than most, and is better placed to know than I am. My view is based on years of observation, but not derived from direct experience other than in 1998. Just as technology can look like magic, perhaps astute judgment can appear to exploit regulatory grey areas.

In any event, the most important part of the story is that Goldman didn’t lose $4.7BN, or indeed anything material. They’re too good for that. Archegos exposed a gulf in competence between Goldman and some others. Perhaps the best judgment was exercised at my old firm JPMorgan, by avoiding the whole sorry mess.