We’re approaching the time of year when report cards proclaiming, “what a joy your child is to have in my class” are dispatched with varying degrees of sincerity. Quarterly MLP earnings are the report cards of the industry, and a time when investors can similarly consider whether they are happy to have included PCD (Promised Cashflows Delivered, LP*) in their portfolios.

A couple of years ago Master Limited Partnerships (MLPs) used to be a reliably boring sector. The influx of new money from ETF and mutual fund investors quickly turned and fled when oil started declining (see The 2015 MLP Crash; Why and What’s Next) which caused MLPs to be exciting in a decidedly distasteful way.

However, operating results for midstream infrastructure businesses weren’t remotely as volatile as their stock prices, which increasingly supports our theory of last year’s collapse; it was a funds flow issue caused by recent investors following (and thereby accentuating) near term momentum. Most firms have released their quarterly operating results, and they were generally decent with some mild positive surprises. MLPs rarely release figures that are substantially off expectations.

TransCanada (TRP) reaffirmed 8-10% growth in its current C$2.26 dividend (yielding 4.4%). Targa Resources (TRGP) experienced some modest softening of margins in their natural gas Gathering and Processing (G&P) segment although volumes were overall as expected. Western Gas (WES) reported EBITDA 15% ahead of expectations due to sharply higher production by Anadarko (APC), their sponsor. This allowed the GP of WES, Western Gas Equity Partners (WGP), to grow its distribution 24% YoY, twice the rate of WES. It’s why the people who run MLPs don’t invest in MLPs, but instead put their money in the GPs that run them. Hedge fund managers make their money from payments they receive from the hedge funds they manage. So it is with MLP managers. As the chart shows, if you add up where MLP insiders invest their own money they prefer GPs by a factor of 22X. 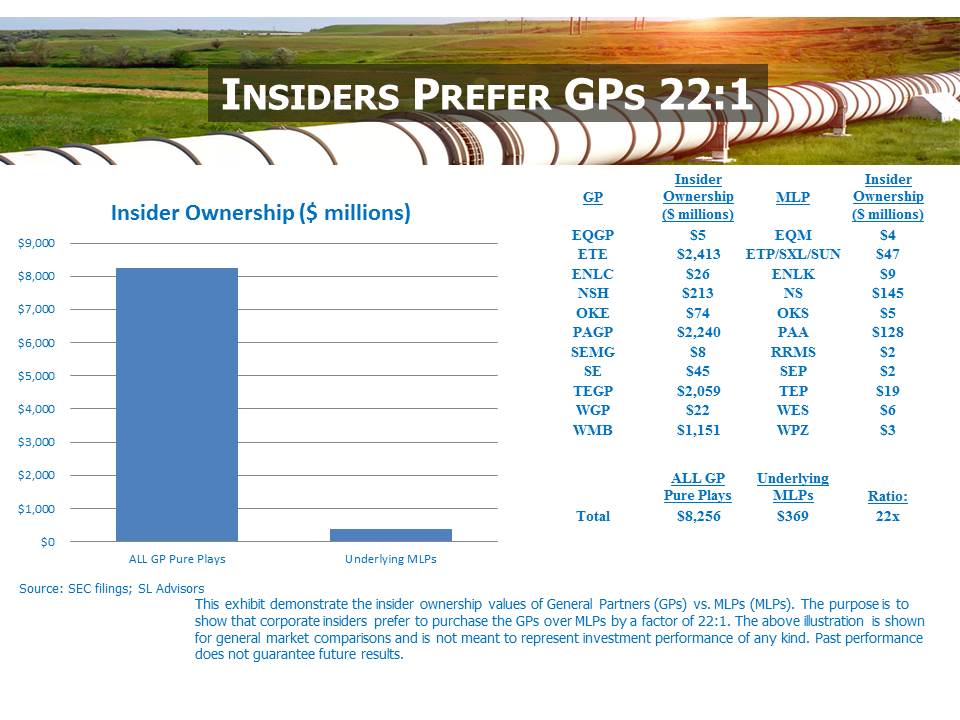 Spectra Energy Partners (SEP) reported EBITDA that was 7% below expectations as mild winter weather reduced natural gas volumes. They are pressing on with Access Northeast which will enhance natural gas distribution and storage in New England if it is implemented. Kinder Morgan (KMI) recently cancelled their North East Direct project due to insufficient demand, so it’ll be interesting to see how Access plays out. SEP increased its distribution 8% YoY. Their GP Spectra Energy Corp (SE) yields 5.3%.

Energy Transfer Equity (ETE) CEO Kelcy Warren has tried everything to extract himself from his ill-advised pursuit of Williams Companies (WMB). His former CFO lobbied WMB shareholders to reject the deal; with dubious legality and no fiduciary compunction ETE issued preferential securities to management, diluting the deal’s value to WMB; they also slashed the anticipated synergies from the original $2BN figure.

Risk arb traders are not a group that normally draws much sympathy. They buy stock in companies that are being acquired and hedge the position by shorting the acquirer. They bet on deals closing as anticipated, which they usually do. Frequent modest profits are occasionally punctuated by expensive surprises. The chart below shows the price of WMB compared with the actual price implied by the terms of the ETE deal. The smaller the spread (or discount to deal terms), the more likely it is to close. The bigger the spread, the less fun risk arb traders are having. You might also think of it as representing the fluctuating stress imposed on involved traders as the odds of the deal closing oscillated. Even Bobby Axelrod (from Billions) would have been challenged to make money. It’s a curious set of circumstances when the suitor experiences such rapid regret (see Williams Stands Alone at the Altar) and that made it harder for some to assess likely outcomes. 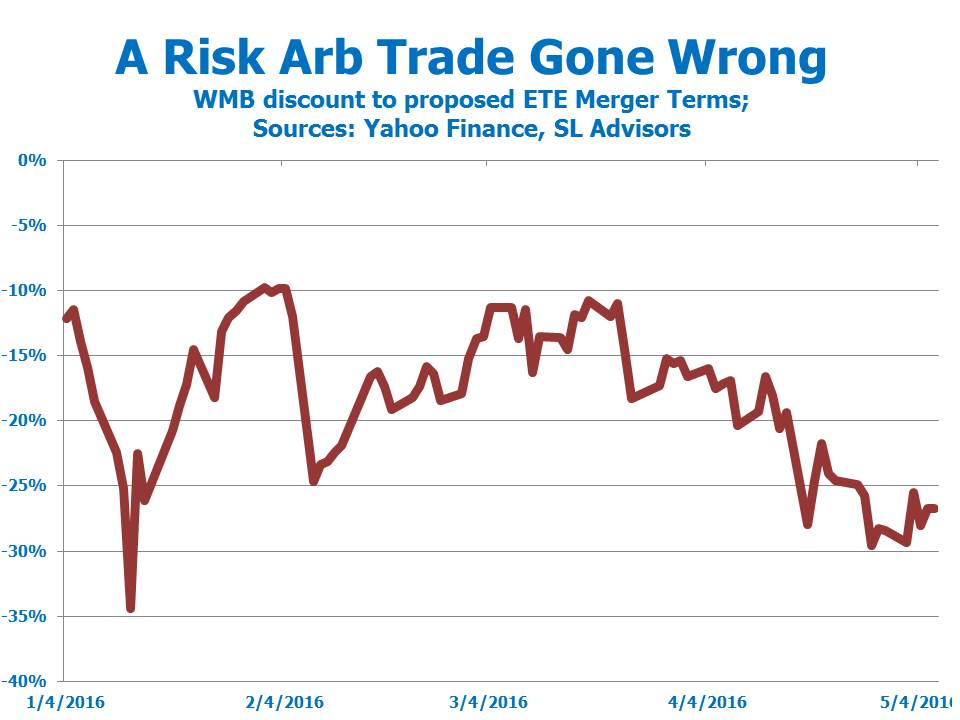 Kelcy Warren recently said of the deal, “We can’t close. We don’t have a transaction that can close. So I want to be very clear, we can’t close this transaction.” Since the absence of an affirmative tax opinion is the basis for this conclusion, we can assume that such insight was arrived at only belatedly (after the other forms of avoidance described above had been used). They may still close on altered terms, although since the WMB board was previously divided on the topic it’s hard to imagine them coming together on less favorable terms given recent history. ETE’s tax counsel has certainly earned their fee.

*PCD is not a real company