Profiting From The Efforts Of Climate Extremists

All three companies will become less invested in future oil and gas production than they were previously. For those who regard energy companies as the cause of global warming, rather than the billions of individuals who buy their products, Wednesday’s three events were a watershed.

Vanguard, Blackrock and State Street are XOM’s three biggest shareholders and also members of the Net Zero Managers Initiative which is committed to “net zero greenhouse gas emissions by 2050 or sooner.” It’s often believed that you can do well by doing good, and a popular narrative is that ESG funds are delivering good returns because ESG-oriented companies deliver better operating performance.

The biggest ESG fund (ESGU), run by Blackrock, is imperceptibly different from the S&P500 (see Pipelines Are ESG). XOM and CVX are both holdings in ESGU. Blackrock’s ESG definition is flexible, like most proponents. Lockheed Martin is a perennial member of the Dow Jones Sustainability Index, so pretty much every company claims ESG-ness. Big natural gas pipeline corporations really are ESG, since they are helping displace coal for power generation in the U.S.

Engine No 1, the activist shareholder in XOM, argued that the company was risking its very existence by continuing to provide the world with oil and gas. This is a non-ESG view based on an assessment of the company’s business prospects, but conveniently aligned with the climate change goals of its three biggest shareholders. XOM will presumably now chart a course that directs more investment to renewables.

CEO Darren Woods clearly wants to keep his job – he has welcomed the new board members, even though in the past he’s questioned XOM’s strategic advantage in pursuing renewables. The business of fossil fuel extraction, processing and distribution (geology, refining, petrochemicals, retail gasoline) would seem to offer few synergies with building solar farms and windmills. Woods has in the past noted that they have little more than money to offer to such efforts.

Perversely, all three developments from last week make the rest of the energy business more attractive. Future supply will grow less than it would have, while demand will continue to be led higher by emerging economies in Asia and elsewhere. Oil and gas prices will likely drift higher. All the focus of climate extremists is on supply, not demand. Consumers are far less susceptible to changing their behavior in support of reduced emissions. 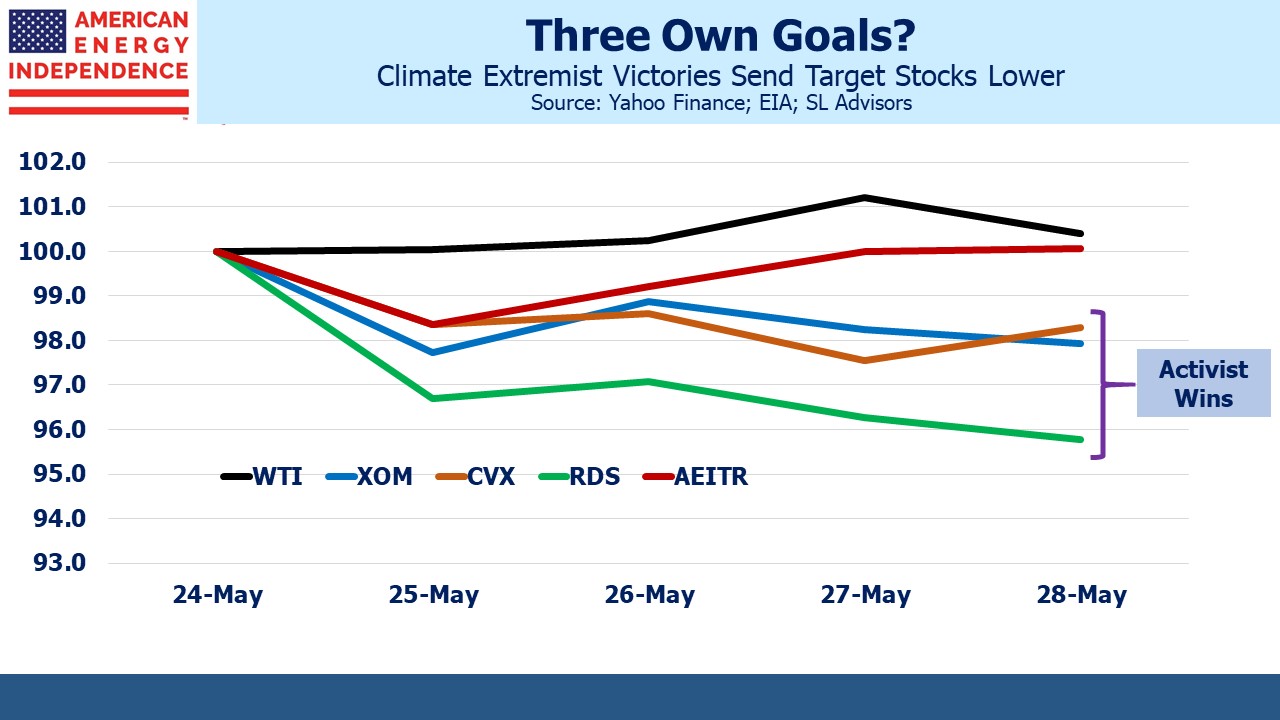 Based on how all three stocks reacted, these developments were not enthusiastically received. Shifting investments away from what these companies know to new areas with very different economics isn’t a compelling way to drive higher returns. The real winners are likely to be privately-held oil and gas producers, and OPEC nations who will welcome the increased market share at higher prices that last week promises.

XOM, CVX and RDS all finished down for the week, lagging crude oil which is usually a reliable barometer of energy sector sentiment. They were also outperformed by North American pipelines, as represented by the American Energy Independence Index (AEITR).

In the same week Tellurian (TELL) announced a ten-year agreement to sell liquified natural gas to Gunvor, a commodities firm. It shows that demand for natural gas remains strong. Privately-held Gunvor is relatively immune to climate extremists and must regard the strategy shifts forced on the three companies as vindicating their deal. But they and TELL can also claim to be constructively lowering CO2 emissions – without the natural gas they’ll be providing to customers in Asia, it’s likely more coal would be burned to meet the region’s growing demand for electricity. Switching from coal to natural gas is the most effective way for the world to reduce emissions, as America has demonstrated for the past decade.

As shareholder-activists and litigants force uncommercial strategies on energy companies, it is creating profitable investment opportunities elsewhere in the energy sector. If supply is constrained too far, much higher prices will cause demand destruction and improve the relative pricing of renewables. But it looks increasingly likely we are heading into a Goldilocks period – growth capex sufficiently reduced to boost free cash flow and cause higher prices, but still enough supply to stop prices from spiking ruinously. The key will be to invest where activists don’t, so as to profit from their efforts.

We are invested in TELL and all the components of the American Energy Independence Index via the ETF that seeks to track its performance.