Last week JPMorgan forecast that the Fed will raise rates at their next nine meetings, resulting in a 2.25% hike in short term rates by March 2023. They warned that inflation is entering a “feedback loop”, whereby higher wages demanded by workers to compensate for eroding purchasing power feed back into higher prices.

Over the past month, the eurodollar futures yield curve has inverted from September ‘23 out. Although monetary policy remains highly accommodative, and the Fed is still buying bonds, forward-looking markets are anticipating another policy error. Having kept rates too low for too long, excessive tightening is looming as the next risk.

For the rate cycle peak to occur below the FOMC’s 2.5% assumed neutral rate suggests that the neutral rate is lower. The economy’s resilience to rising rates seems to have weakened with each recession. Since 1980, the two year treasury note yield has peaked at successively lower levels. CPI inflation has generally followed, with the current jump clearly breaking that pattern. 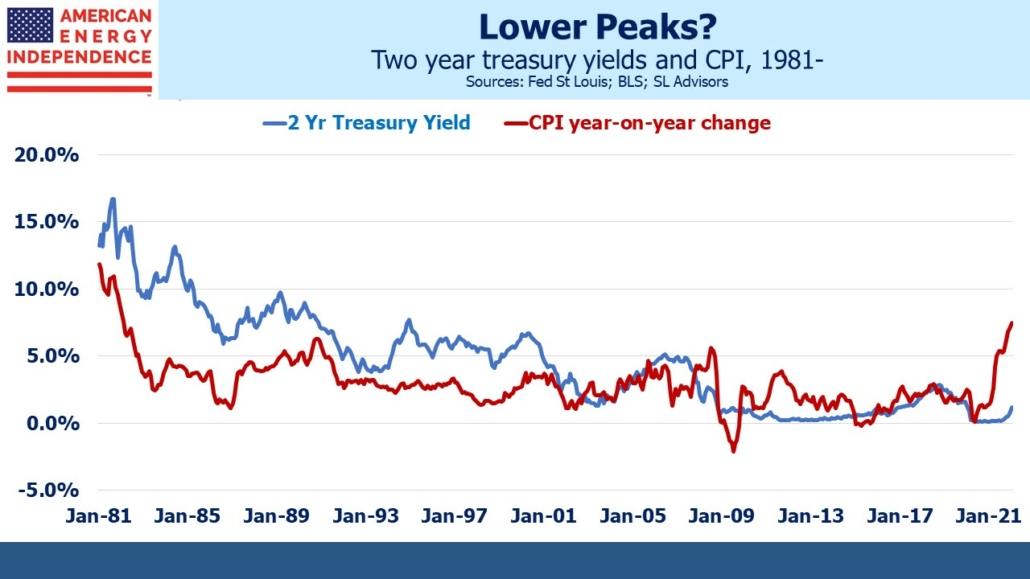 Financial markets are priced for the assumption that the history of declining rate cycle peaks will persist through this one. In November 2018 two year treasury yields reached 2.98% before declining. They’re currently half that, at just under 1.5%.

The contrast with past cycles speaks for itself.

Whatever the outcome over the next couple of years, the Fed’s forecasting ability has already taken a knock. If the current yield curve turns out to be prescient, inflation will have moderated with the Fed barely tapping the brakes. Betting on higher rates still seems like an asymmetric bet.

Former NY Fed chair William Dudley noted an unusual side to the political challenges likely facing the Fed as they raise rates. Federal Reserve profits historically come mostly from seignorage, the income from printing and distributing currency. But as the Fed’s balance sheet has neared $9TN, they’ve earned increasing amounts on the spread between the yield on what they own and their cost of funding (close to 0%). Dudley explains more in an op-ed delightfully titled U.S. Treasury’s Golden Fed Goose Is About to Get Cooked. Shrinking their balance sheet will reduce the Fed’s interest income, and monetary tightening will increase their own cost of funding, by raising the rate they pay on bank reserves.

Dudley estimates that the Fed may start posting losses by next year, which would require funding from Congress. The Fed always remits profits to the US Treasury, so the political optics of the reverse happening are untested. At a minimum expect Congressional hand-wringing over the Federal budget subsidizing monetary policy which by then may even be harming employment. Whether this will hamper the Fed’s desire to push rates higher remains to be seen, but traders expecting a rate cycle peak below 2.5% probably anticipate such an issue.

Russia’s bellicose posture towards Ukraine complicates things – it’s bearish for most equity sectors except energy, since it’s boosting oil and gas prices. Conflict is rarely good for bonds because wars are expensive and the US may yet start incur costs in providing weaponry to Ukraine. At the same time, the imposition by the US and EU of ruinous sanctions on Russia is dampening growth prospects. Further complicating the issues facing policymakers, elevated energy prices will not help reduce inflation in the near term.

The energy crisis roiling Europe has reaffirmed the need for reliable natural gas through sharply higher prices. European buyers have scrambled to access additional sources, mostly from the US via shipments of Liquified Natural Gas (LNG). This is to compensate for the poor planning that has left the EU reliant on Russia for up to 40% of its natural gas. Recently up to two thirds of US LNG shipments have gone to Europe, highlighting the flexibility and market responsiveness of this resource. Windmill prices have not been similarly boosted. European fears about energy security are most obviously bullish for the US energy sector.

The US Federal Energy Regulatory Commission (FERC) is moving in the opposite direction. FERC revised the standards under which they evaluate new pipeline proposals to consider the impact on emissions from the oil or gas to be transported.

Building new pipelines is almost impossible in the US anyhow, because environmental extremists have figured out how to create endless judicial roadblocks. Demand for reliable energy continues to grow, representing the complete failure of climate extremists to convince consumers of the need pay higher prices in support of the energy transition.

Meanwhile five European energy companies are suing EU governments for €4BN in damages over traditional energy resources that may not be fully utilized under current EU climate policies intended to phase out fossil fuels. This is happening under the hitherto obscure Energy Charter Treaty (ECT) originally crafted during the Cold War. It is likely to further complicate European efforts to reduce emissions.

While additional US impediments to new energy infrastructure are disappointing to pipeline executives, for investors they represent a further optimization of free cash flow since constrained spending opportunities leave more cash available for dividend hikes and buybacks. As long as progressive policies don’t impede our access to reliable, dispatchable energy they can be regarded as pro-investor. National security is once again becoming a factor in energy policy.