A little noticed sentence in President Trump’s State of the Union speech was that the U.S. would join the Trillion Trees Initiative. He didn’t mention climate change – most people like trees anyway, and the link was obvious. But planting trees to combat climate change is so seductively simple that it must be impractical. A trillion trees is a lot, and mentioning it in a prime time speech will have caused at least half the country to dismiss a political gimmick.

So we looked at the plausibility of harnessing nature to consume the excess CO2 humans are generating.

To grow, trees require CO2 and water, which through photosynthesis they convert into carbon and  glucose to form the tree, and oxygen which they emit. Growing 1 ton of wood requires around 1.55 tons of CO2. By atomic weight, carbon is 27% of a CO2 molecule. A dry tree is typically around 50% carbon.

Of course trees vary enormously in size. The University of Arkansas Division of Agriculture publishes a handy guide for estimating the weight of a tree given the measured circumference. 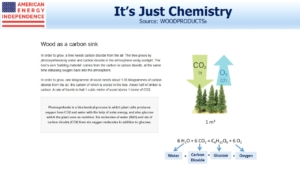 The world generated 33 gigatonnes of CO2 last year. Divided by the 5.7 tonnes consumed by the average tree, planting 5.8 billion trees would, over their life, consume all the CO2 emissions of last year.

Is this possible? Earth currently has 3.04 trillion trees, so we’d need to increase the stock of trees by just 0.19% per annum to take a giant step towards combating global warming.

America plants 1.6 billion trees a year – half by forest product companies. Costs are estimated to be as low as 30 cents a tree.

Even if this analysis is out by a factor of 10X, that would still leave the world needing to add 1.9% to global forests every year – certainly viable if embraced as a solution.

Planting trees is labor-intensive. But two companies, Droneseed and Dendra Systems, are developing plans to use drones that can plant seeds on hundreds of acres a day, versus the two acres that a professional tree planter typically covers. You can watch two interesting videos explaining how here, and here.

So it would seem that a global effort to add around 6 billion new trees every year is achievable.

Articles like World losing area of forest the size of the UK each year, report finds in the UK’s Guardian stoke fears of enormous global tree loss. Brazil is widely criticized for deforestation in the Amazon, but overall the portion of the world covered with trees has been growing. This is partly because a warming planet is raising the tree-line in mountainous areas, and allowing forests to creep into tundra.

Environmental extremists have instinctively rejected the Trillion Trees Initiative, for mostly predictable reasons: it doesn’t require overhauling our energy supply, or erecting millions of windmills, solar panels and tens of thousands of miles of ugly high voltage electricity lines. It seems so much more attractive than the Green New Deal.

Renewables, nuclear and natural gas are all part of the solution to climate change, along with adding billions of trees. Burning natural gas produces water and carbon dioxide, the two inputs trees need to grow. Burning coal releases nitrogen oxides, sulfur dioxide, particulate matter, mercury and other hazardous substances that the local population inhales. Everyone should be able to agree that coal use must drop.

Most of the criticism of the Trillion Trees Initiative stems from concern that it’ll weaken the case for dramatic interventions to the economy promoted in the Green New Deal. That’s precisely why it’s appealing.