Berkshire Hathaway (BRK) acquired Dominion Energy’s natural gas pipeline and storage assets for an enterprise value of $9.7BN, which included BRK using $4BN of its cash pile. Although some estimated the price on the low side, Buffett clearly sees a long positive future for natural gas pipelines. This was a welcome endorsement.

At the same time, Dominion and Duke Energy canceled their planned Atlantic Coast gas pipeline project (ACP). This has been the subject of numerous court challenges from environmental extremists. The project appeared to be proceeding, with capacity 90% subscribed, and legal challenges successfully rebuffed. However, the possibility of further court proceedings with additional ongoing delays and cost uncertainty led Dominion and Duke to abandon the effort.

In other news, the U.S. Supreme Court over-ruled a lower court, which had blocked a permit program that several pipeline projects were relying on for construction. But at the same time, it rejected a request from the Trump Administration to allow construction of the Keystone XL crude oil pipeline that had been blocked by a Federal judge in Montana.

But the most stunning legal development was the ruling by U.S. District Judge James E. Boasberg that the Dakota Access Pipeline (“DAPL”) must immediately cease operations and remove all the crude in it within 30 days. DAPL’s construction under Lake Oahe, ND, near the Standing Rock Sioux Reservation, drew fierce protests from local Native Americans and others opposed to its construction. The Obama Administration was opposed to it. Following Trump’s election, the Army Corp of Engineers gave their approval and DAPL was completed. It has capacity of up to 570,000 barrels per day, moving crude from the Bakken in North Dakota to Patoka, IL.

The judge’s ruling finds fault with the approval issued by the Army Corps of Engineers, which was given on the basis of an Environmental Assessment (EA). The Court found that, given the controversial nature of the project, a more rigorous Environmental Impact Statement (EIS) was required under the National Environmental Policy Act (NEPA).

In summary, the judge believes the government incorrectly allowed the pipeline to be built.

Whether or not this is the case, ordering the pipeline to shut down defies common sense. The implication is that, even if the government issues a private company a permit, substantial economic risk remains if your opponents can find a compliant judge. DAPL could lose $1.2BN next year if it’s forced to close. Bakken crude production will face higher transportation costs as producers resort to rail, where spills are more likely. It may not even by physically possible to empty the pipeline within the 30 day deadline. The process includes pumping huge volumes of nitrogen into the pipeline to push a bullet-shaped “pig” through it.

There are numerous knock-on effects. Production may now be cut back in the face of higher transport costs, causing layoffs. Landowners who sold the pipeline the right to cross their land won’t get paid. North Dakota royalties on production will fall. One analyst suggested that Judge Boasberg was frustrated that the Army Corp of Engineers had concluded their EA was adequate even after the court told them to review their process. Under this interpretation, the judge is trying to punish the Army Corp of Engineers, although oversight of the Administration is more properly the role of Congress.

The ruling is being appealed, and DAPL may yet continue to operate if a higher court over-rules Judge Boasberg’s order to shut down the pipeline. For the judicial system to work, a more reasonable assessment is needed. But considerable uncertainty about DAPL’s future will remain, and if there’s a change in government in November, the Army Corps of Engineers may decide not to even issue an EIS, which they estimate will take 13 months. DAPL cost $7.5BN, substantially over budget because of numerous delays. It may never restart. 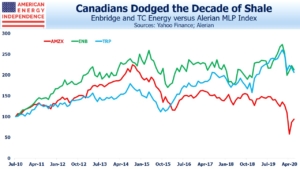 Energy Transfer (ET), who built DAPL and retains a 36.4% ownership stake, has earned a reputation for not backing down when opposed by environmental activists. But the implication of the ruling is that permit issuance by the Federal government can’t be relied upon when deploying capital. Whatever the merits of this particular case, a court shouldn’t be able to impose economic losses on a company that has obtained the necessary permit, just because the permit may have been issued incorrectly. Otherwise the permit recipient needs to review its own regulator for correct procedure. This is not how great nations are built.

The cancelation of ACP, the uncertainty over DAPL and the perpetual struggle to build Keystone XL will cast a shadow over every new pipeline project. Unpredictable legal delays have prevented the construction of nuclear power facilities in recent years – although most costs can be estimated, court challenges can burn up time and money in ways that are hard to anticipate. The private sector has concluded nuclear power is just not worth the trouble, impeding our use of this source of emission-free energy. The pipeline industry is going the same way.

Anti fossil-fuel activists have achieved a great victory. But they’ve also achieved what pipeline investors have failed to – a decreased appetite for new construction. The Shale Revolution has been a huge bust for equity investors in the U.S. energy sector, including midstream infrastructure. The old pipeline business that used to be dominated by MLPs did little new building, invested in maintenance of their existing assets and paid attractive distributions that grew through price hikes and productivity improvements.

Pipeline executives drank the same kool-aid as their upstream customers. Too often, growth projects failed to cover their cost of capital and acquisitions were based on unrealistic assumptions. The pursuit of growth has been, in aggregate, bad for investors. Canadian companies have been more disciplined, but the abject past decade’s performance of the Alerian MLP Index reflects poor capital allocation by management teams constantly building and buying.

Falling growth capex this year is the driver of increasing free cash flow (see Pipeline Cash Flows Will Still Double This Year). Last week’s court rulings are likely to further trim growth projects, which will be lamented by management teams but cheered by investors.

It’s also likely to increase the pricing power of existing infrastructure, especially where additional capacity is needed but unavailable due to growing legal uncertainty. If future customers ultimately can’t access natural gas because needed pipeline capacity wasn’t built, that will be someone else’s problem. Maybe a more predictable legal process will evolve, but for now it is clearly opaque and sometimes capricious.

Don’t let the disappointment that will be heard on 2Q earnings calls confuse you. Many of these companies developed a culture of always building. In the future, growth projects will be more modest additions to existing infrastructure where permit jeopardy isn’t a factor. Buffett is unlikely to pursue controversial new pipeline construction for the business he just acquired, and he sees much to like about its prospects. Climate activists are doing long-term pipeline investors a favor. Few would expect us to admit that! Barriers to entry are becoming insurmountable.