Pipeline Investors Are Being Rewarded

I spent the last couple of days visiting clients in central Florida, which is why this blog post is a day later than normal. The gradual return of in-person meetings is a welcome reminder that we’re moving on from Covid. Floridians are happy with how their state handled the virus, often noting that business has been more or less as usual for months’ longer than other parts of the country. Bloomberg even declared Florida and its governor Ron DeSantis “the pandemic winner.” At one hotel in Orlando where masks were not required, a guest wearing a mask entered the elevator and apologized for wearing one once he saw me standing there unmasked (I’ve been vaccinated).

It’s still hard to believe that a year ago New Jersey even forbade a solitary walk in the park or woods. The loss of freedom was breathtaking. It prompted my wife and me to travel south at the earliest possible opportunity (see Having a Better Pandemic in Charleston, SC).

Since then NJ adopted a mixture of guidelines and rules which allowed residents to select which ones to follow. For example, the advice to New Jerseyans to avoid non-essential travel was widely ignored based on the crowds I regularly saw at Newark airport during the winter.

Americans are increasingly done worrying about Covid. Abundant fiscal stimulus on top of the vaccine-enabled economic recovery are driving the market higher.

For most equity sectors other than energy, investors often appear more concerned about missing out on a profitable trade than losing money. By contrast, the pipeline sector has not been overly burdened with FOMO buyers for some time – a feature that investors find attractive. It is one of the very few areas of the market that can still be called cheap.

1Q earnings were good, with many positive surprises and guidance revised upwards. The Texas power cut provided windfall gains for Energy Transfer, Kinder Morgan and Enterprise Products Partners. Every company has something to say about the energy transition. 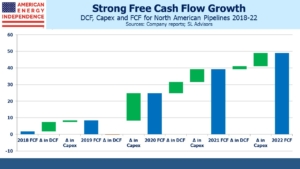 Following earnings we updated our Free Cash Flow (FCF) bridge chart. It’s virtually unchanged from the prior quarter. We expect FCF to continue on its strong growth path. Investors are beginning to embrace this view, which is why the American Energy independence index (AEITR) is up 35% YTD.

FCF is a metric that applies to any equity sector, and it’s becoming the most used measure of results on earnings calls. The Shale Revolution turned out to be an investment bust. Fears of stranded assets due to the energy transition grew in recent years, and the Covid-driven collapse in oil demand a year ago was the third body blow to sentiment. Since then, demand has recovered and growth capex has dropped.

The FCF yield on AEITR is 11% using YE 2021 figures, and we expect it to grow further next year. This puts it at 2X the S&P500. Median Debt:EBITDA is now down to 4X, and we’re finding investors are increasingly drawn to the operating stability, strengthening balance sheets and growing FCF they see. Fund flows (i.e. mutual funds, ETFs and other exchange traded products) are turning positive from our vantage point. Yields of close to 7% are too high for the risk so offer the potential for capital appreciation on top of attractive income. 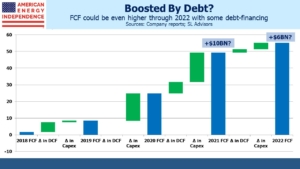 Energy companies are investing less back into their businesses. This is true for upstream as well as midstream, and is the most important factor driving FCF higher. Improved financial strength will allow some use of debt to finance reduced growth capex while maintaining prudent Debt:EBITDA levels. If a CFO is happy at 4X, a new project that generates, say, $100MM in additional EBITDA can justify being financed with $400MM in debt, maintaining the 4X ratio.

We have modified the FCF bridge chart to reflect this, assuming roughly half of future growth capex will be debt-financed. Each company’s actual financing choices will differ, but the effect is to reduce by 50% the portion of growth capex funded by internally generated cash, which in turn drives FCF even higher.

It’s an outlook that is resonating with investors who take the time to consider recent progress. My meetings were by definition with a self-selected group of midstream investors, but most found it refreshing to look at a sector that’s rising yet remains cheap. 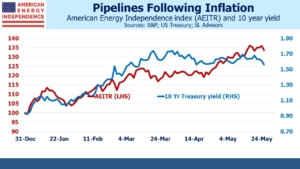 Inflation is also causing more concern. Pipeline stocks have marched higher along with treasury yields, a link that makes sense given energy’s responsiveness to faster GDP growth and higher oil and gas prices. The possibility of using pipeline investment as a source of income that should benefit from further rises in bond yields and inflation expectations was found intriguing.