Cheniere’s $2.8BN in EBITDA was close to consensus, and they reaffirmed their full year 2022 guidance of $11.25BN having revised it higher three times this year. They paid down $1.3BN in debt. The Stage 3 expansion of the Corpus Christi LNG export facility is on track with first shipments expected in three years. Eventually more US natural gas will be available to buyers in Europe and Asia, but construction takes longer than popularly believed.

Cheniere also noted that Asian buyers continue to negotiate 20-year contracts while European buyers are not. Countries like Germany are relying on being able to buy what they need in the spot market to avoid long term commitments and maintain their goal of reducing fossil fuel use. It’s another example of the EU pursuing green ambitions while developing countries prioritize growth, which relies on increased energy consumption.

Morgan Stanley believes Cheniere is on track to deliver at least $25 per share in Distributable Cash Flow within several years, a >14% yield based on the current stock price.

Williams reaffirmed their previous EBITDA guidance of $6.1-6.4BN with bias towards the upside. They’re also planning to invest in a Carbon Capture and Sequestration (CCS) facility in the Haynesville. The poorly named Inflation Reduction Act raised the 45Q tax credits for CCS, and Williams is one of several companies planning to take advantage. They raised their dividend by 3.7%.

Energy Transfer missed expectations in part because of a one-time $128MM legal expense related to a prior class action suit and 130MM hedging loss caused by difference in timing recognition between inventory and hedge instrument. Setting these two items apart, their results were in line with consensus. They are targeting Debt:EBITDA leverage of 4.0 by the end of next year – still a little higher than peers which we estimate will be around 3.5X by then. Management now expects to make a Final Investment Decision (FID) on their Lake Charles LNG export facility during 1Q23. 2022 EBITDA guidance was raised for the third time this year, now $12.8-13.0BN.

Enbridge, North America’s biggest pipeline company by market cap ($80BN), reported 3Q EBITDA of $3,758MM, 4% ahead of expectations. They raised their dividend by 3%. Enbridge has a C$17BN (US$ 12.75BN) backlog of growth projects, up from C$13BN the prior quarter. This includes C$3.6BN to expand the southern segment of their British Columbia gas pipeline system. This is a response to strong demand from LNG customers presumably in Asia. New England and California are impeding natural gas supply to their citizens, while Canada is preparing to increase exports.

Plains All American reported $623MM vs expectations of $562MM. They raised their distribution by 23% and expect 10% growth going forward.

Results like these should continue to attract investors because of steady and growing cash flow generation. Meanwhile, President Biden reaffirmed that he is against any oil drilling just days after criticizing oil companies for not producing more oil. Even Democrats must agree the White House has no visible energy strategy.

The Financial Times published an interview with EQT CEO Toby Rice in which he said, “Sending US LNG to China and India is going to be the biggest decarbonizing thing we can do as a country,” Rice is promoting coal to gas switching as the most effective way to curb CO2 emissions. We believe this represents a big opportunity for US natural gas investors. 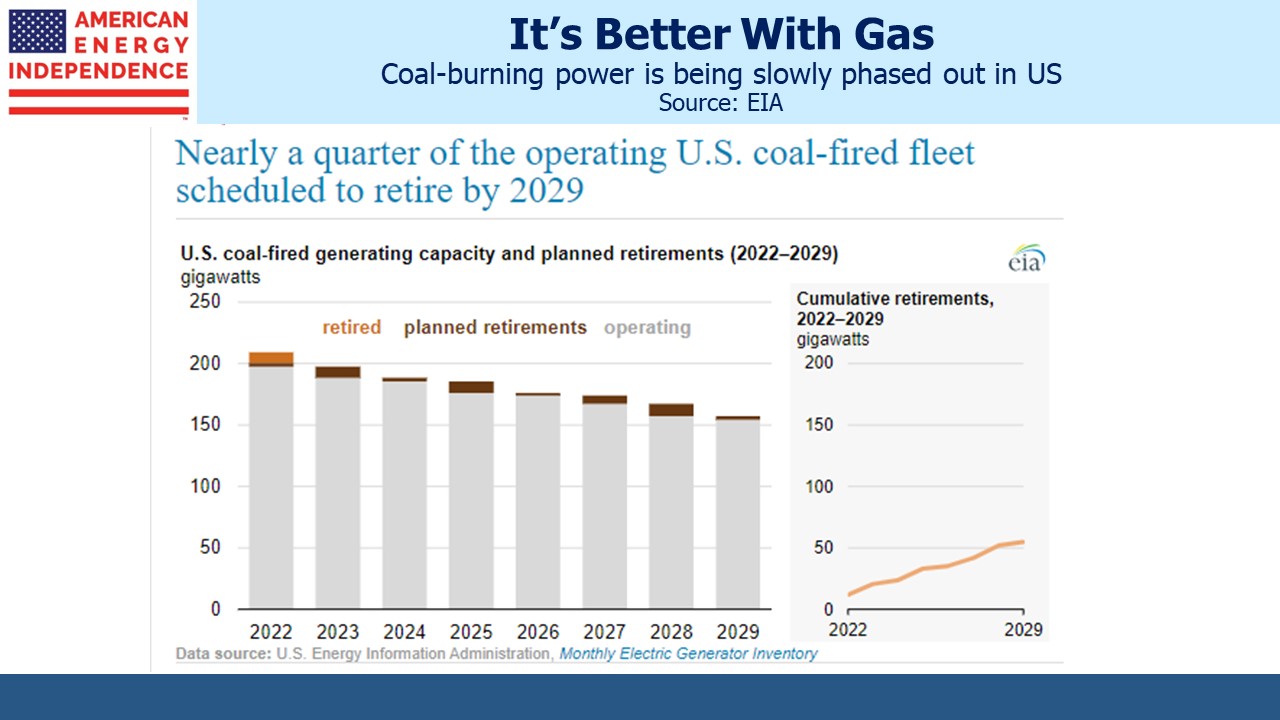 Finally, the US Energy Information Administration (EIA) reported that capacity of Combined Cycle Gas Turbines (CCGT) will reach 24% of total US power generation by year’s end. Last year CCGT generated 32% of our electricity, ahead of coal (22%) and nuclear (19%). CCGT’s share of actual power generation is bigger than their share of capacity because solar and wind typically operate at only 20-35% of their capacity. It’s not always sunny and windy.

Around a quarter of US coal-burning power capacity is scheduled to be retired by 2029, continuing a trend that has been the main source of falling CO2 emissions over the past couple of decades.

Midstream energy infrastructure is well placed to support the continued growth in global demand for US natural gas.