One of the few pleasant surprises of recent weeks is that business for the major pipelines remains solid. Now that 1Q earnings season is complete, we have revised guidance from all the companies in the broad-based American Energy Independence Index.

Caution was evident throughout on earnings calls, as one company after another described the impact of collapsing transportation demand and the high degree of uncertainty around forecasts. Some of the figures were stunning — Magellan Midstream reported a 20% drop in demand for refined products (mostly gasoline) in April, and a 76% drop in jet fuel, although they did note an improvement in the latter part of the month. 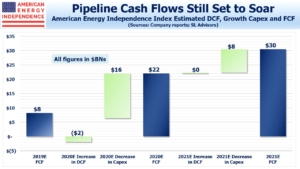 With new guidance provided on earnings calls, EBITDA and Distributable Cash Flow (DCF) have generally been revised down by 10-15%, a much smaller drop than many feared in March when the sector plunged. So our 2020 DCF forecast is now $51BN, versus $60BN a year ago. There is exposure to volumes and prices, but long term “take or pay” contracts provide solid support at times like this.

Spending on growth projects is being cut at roughly the same pace. Every dollar not spent boosts FCF. Investors regard this as welcome acknowledgment of reality – energy management teams have often been too ready to reinvest back in their business, similar to their upstream customers. 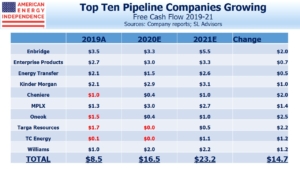 The top ten midstream energy infrastructure companies have shaved over $5BN from this year’s growth plans. Since there’s rough alignment between the drop in DCF and reduced growth capex, FCF still looks likely to double this year versus last. There can’t be many sectors that can be expected to generate such a result.

In turn, this is supporting dividends which are, for the most part, still being paid (see Pipeline Payouts Holding Up).

The story isn’t as positive for MLPs, which have been much more active in slashing payouts. The MLP-dedicated Alerian MLP ETF (AMLP) lowered its dividend again recently, reflecting what its components are doing. Compared with the midstream energy infrastructure sector, MLPs have more liquids/less natural gas exposure, more risky gathering and processing, and are more leveraged (see More Solid Pipeline Results). Only two of the ten biggest pipeline companies are MLPs, and size tends to bring diversification of flows as well as stability. 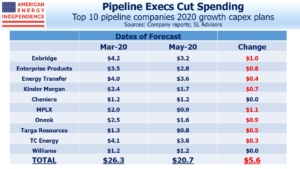 Even after incorporating the impact of Coronavirus, FCF is still expected to double year-on-year. If it happens, it’ll represent a stunning turnaround for a much maligned sector.

It’s still too uncertain to extend that forecast out to 2021. Few companies would offer any type of confident guidance. In our first piece on the topic in April 2019, we were originally looking for FCF to double again next year. That would push the sector’s FCF yield above 11%.

This is why the rebound from the lows of late March has so much momentum.