Suppose that the owner of a pipeline operating at 100% capacity opposed the construction by a competitor seeking to meet unsatisfied demand. Or consider two operators of competing pipelines that agree to refrain from adding needed capacity. Such behavior would be anti-competitive, hurting consumers but good for the pipeline operators and their owners. Scarcity of pipeline capacity would allow higher tariffs and curtailed investment in new projects. Investors would cheer. 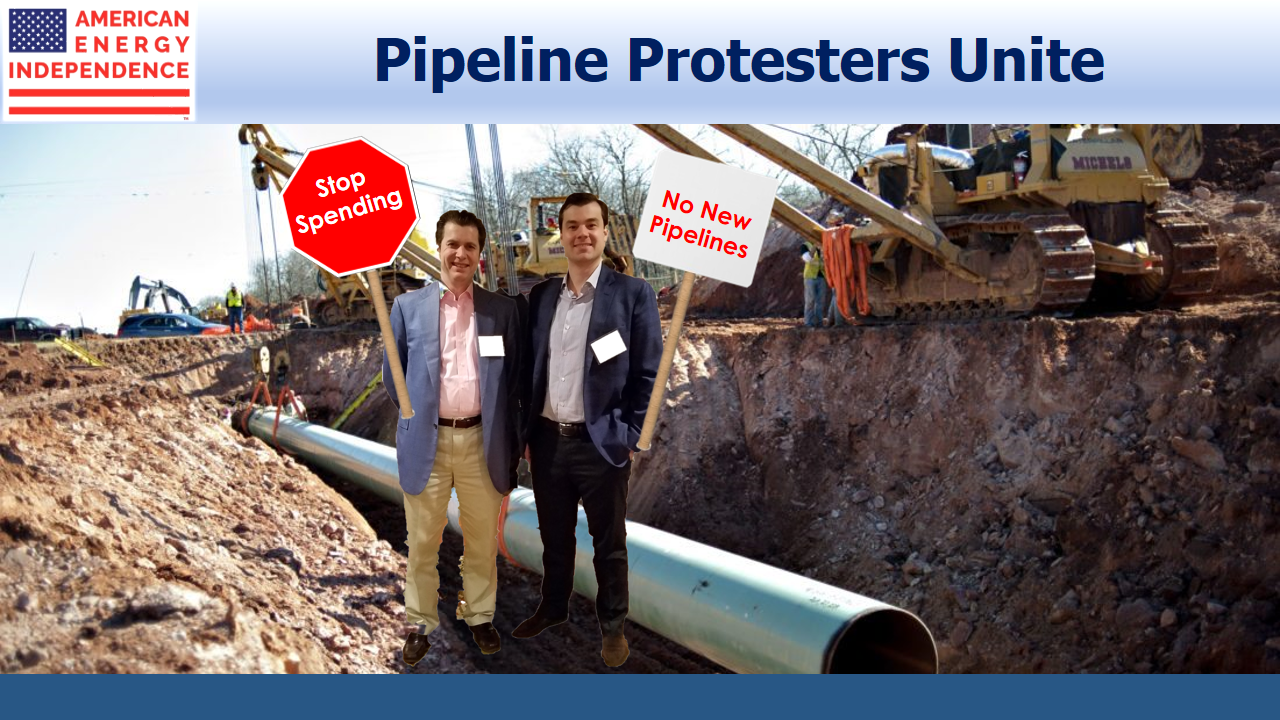 In many ways, the efforts of environmental extremists to oppose new pipeline construction has the same effect as if the pipeline operators themselves declined to invest in meeting new demand. Con Edison has placed a moratorium on new gas hookups across most of Westchester County, because of the inability to bring more gas into New York State.

Over the last decade, New York’s residential gas consumption has jumped by 20%, and electricity generation has become increasingly dependent on gas-fired generators. When the state retires its two Indian Point nuclear reactors in 2020 and 2021, it will need to find a replacement for 25% of the power for New York City and Westchester county. Anti-nuclear groups call for renewables to replace the lost power, but that may be difficult as non-hydroelectric renewables account for just 6% of the current mix.  Natural gas provides the largest share at 35%.

Opponents of new pipelines want to impede consumption of natural gas in their quixotic effort to combat climate change. Although they would appear to share little common ground with pipeline investors, their success reduces the backlog of new projects, thereby lowering the sector’s capex. Perversely, pipeline investors complaining about poor capital discipline are being helped by environmental activists.

Natural gas demand is growing across the U.S., and globally. U.S. crude oil is gaining market share and meeting most of the growth in demand, which is largely from developing countries. The midstream energy infrastructure sector continues to plan new projects to transport America’s growing output. Although growth capex probably peaked last year, substantial investments are planned this year. Williams Companies (WMB) estimates $2.4BN in spending on new projects, including their proposed natural gas pipeline across New York harbor that was recently rejected.

Moreover, recognizing the strength of opposition to new construction allows pipeline operators to enjoy stronger pricing supported by relative scarcity. They have a convenient excuse for their customers and regulators to justify profitable bottlenecks and constrained capacity. If the industry sought to create such conditions itself, an anti-trust investigation would surely follow. In fact, environmental opposition is providing the political cover to seek oligopolistic profits.

Building new infrastructure is in the DNA of every midstream management company. Their dislike of the Sierra Club is visceral. Investors have reflexively joined the criticism of those who would impede customers’ access to more oil and gas.

But on reflection, while we disagree with the virtue-signaling that governs much of the anti-carbon movement, we’ve concluded that, as investors in midstream energy infrastructure wanting higher FCF, our interests are more aligned than with company managements.

We want fewer new pipelines too. MLP investors might consider joining the next protest. The outcome could be better than you think.