Recently Shell’s CEO commented that China had added more coal production capacity during the third quarter than Shell’s entire global energy production. It is a response to high prices. We don’t often write about coal because we’re not invested in it. Prices have more than doubled over the past year, although were lower in September (the Fed St Louis series shown is through August). Unburdened by ESG and not visited by Greta, only China can explain how this is consistent with curbing CO2 emissions.  If they do start falling as promised in 2030 it will likely be from a higher level than they currently project.

Interestingly, coal prices compared with crude oil on a BTU-equivalent basis recently converged, for the first time in at least thirty years. They’re not direct substitutes other than in some cases for power generation. Relative to coal, crude oil is historically cheap. The Biden administration does not see it this way, but OPEC+ does. 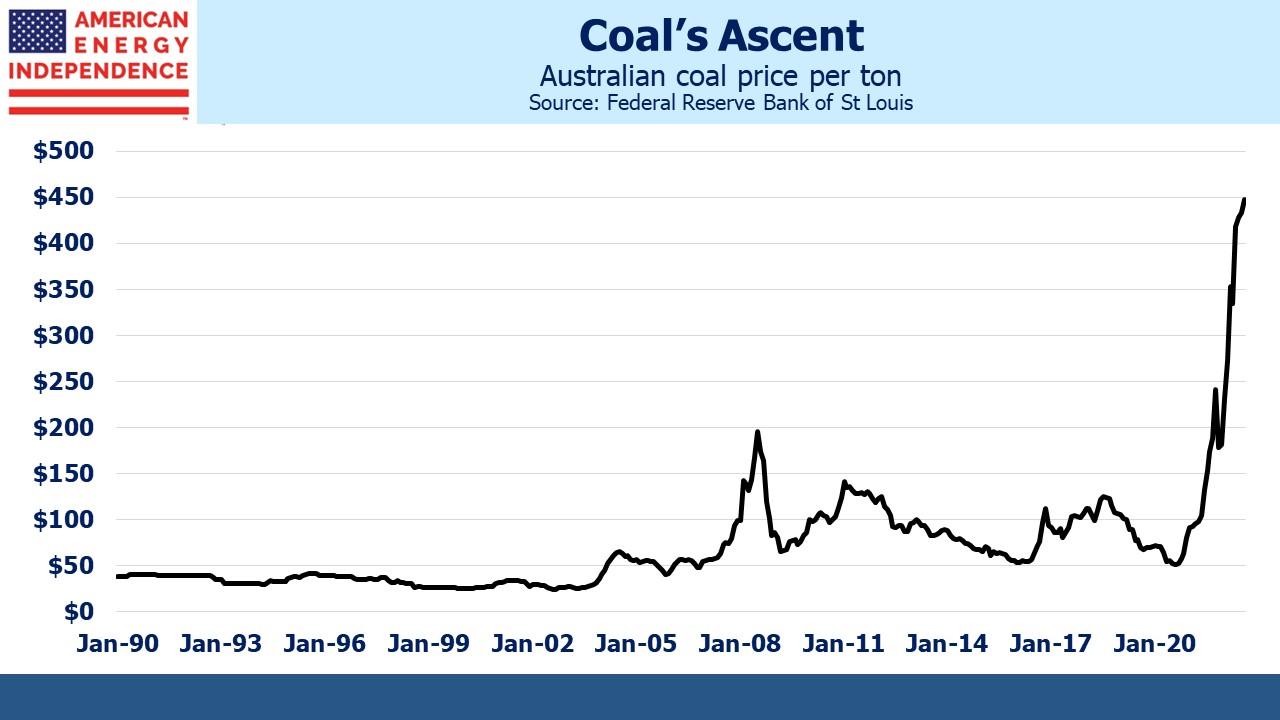 Aramco Chief Executive Amin Nasser recently warned people are “…focusing on what will happen to demand if recession happens in different parts of the world, they are not focusing on supply fundamentals.” At the same conference, Shell Chief Executive Ben van Beurden said current high prices do not easily translate into a shift in capital allocation given it can take decades for oil and gas projects to produce and start paying off. 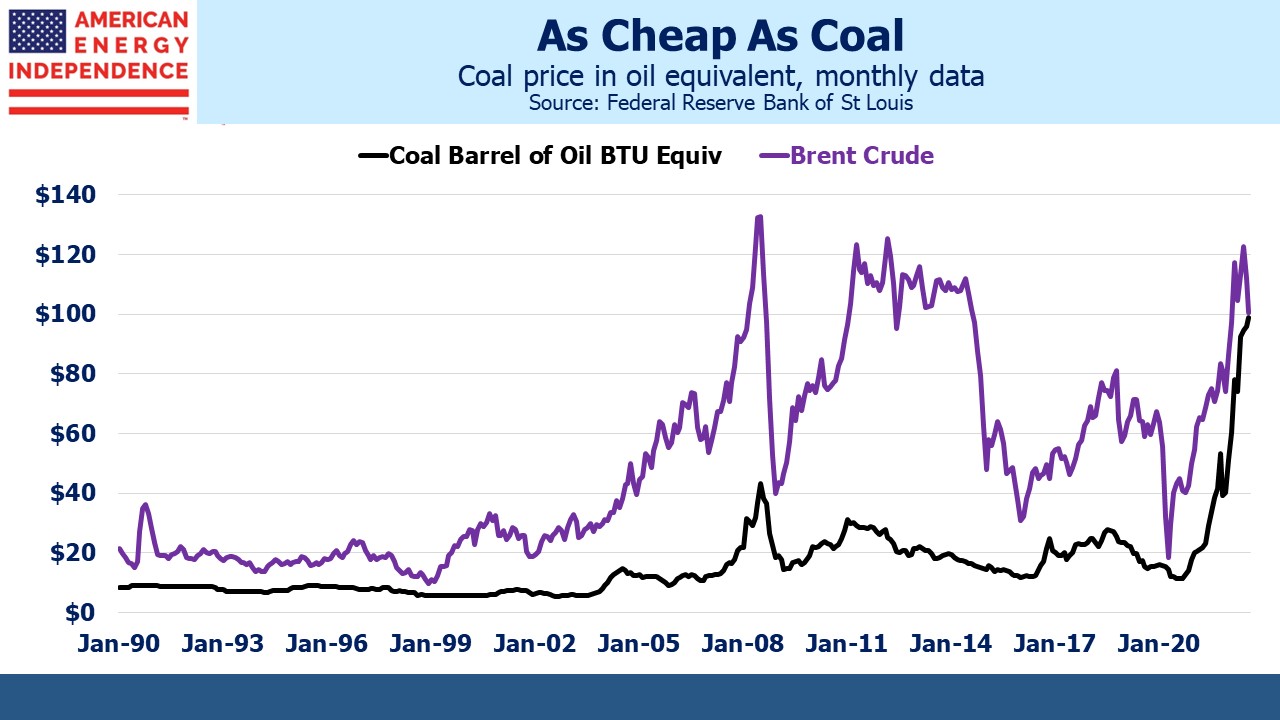 Predicting commodity prices isn’t easy, but it does seem that for crude oil the risks are skewed to the upside. Recession fears are widespread, but it’s still not the most likely outcome. The actual drop in OPEC+ output is likely to be around 1.2 Million Barrels per Day (MMB/D) rather than the 2 MMB/D advertised, because several countries are already struggling to produce at their current quota. Nonetheless, Goldman Sachs raised their estimate for crude by $10, to $110 for this quarter and $115 next quarter. “Price risks are skewed potentially even higher,” says Damien Courvalin, head of energy research. 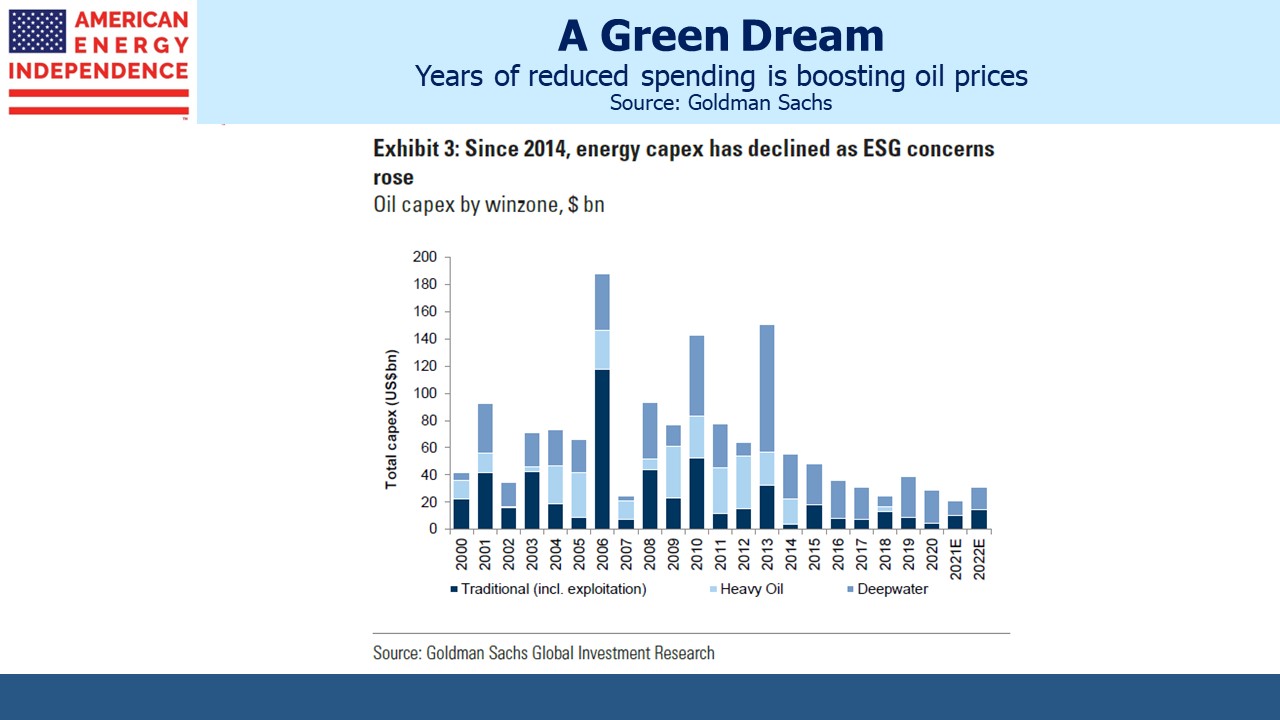 Growth capex has been falling for several years, and as Shell’s van Beurden noted lead times are long. Energy security has suddenly become a priority for Europe following years of policies based on the unsteady foundation that supply would always be there. Without betraying a smile, OPEC Secretary-General Haitham Al-Ghais noted that “Energy security has a price, as well.” He could have added disingenuously that the higher prices OPEC is engineering will stimulate additional investment in future production, something western governments are loathe to do.

Bloomberg columnist Javier Blas wrote, “Currently, oil investment is geared toward a world of stagnant, or even falling, demand — in line with climate-change goals to slash fossil-fuel emissions. The problem is that oil demand not only isn’t declining, but so far this year it’s increasing.”

This is why Goldman’s head of commodity research Jeff Currie argues that the ESG movement is impeding the capex cycle response that would normally follow high prices (see Liberal Energy Policies Remain Good For Investors). Remember to hug a climate protester and drive them to their next protest.

Unlike most OECD countries, Britain has recognized that they need more energy that is reliable. They recently made more licenses available to drill for oil and gas in the North Sea. On cue Greenpeace announced they would be filing a court challenge, confirming the Currie doctrine linking ESG with reduced supply and higher prices. 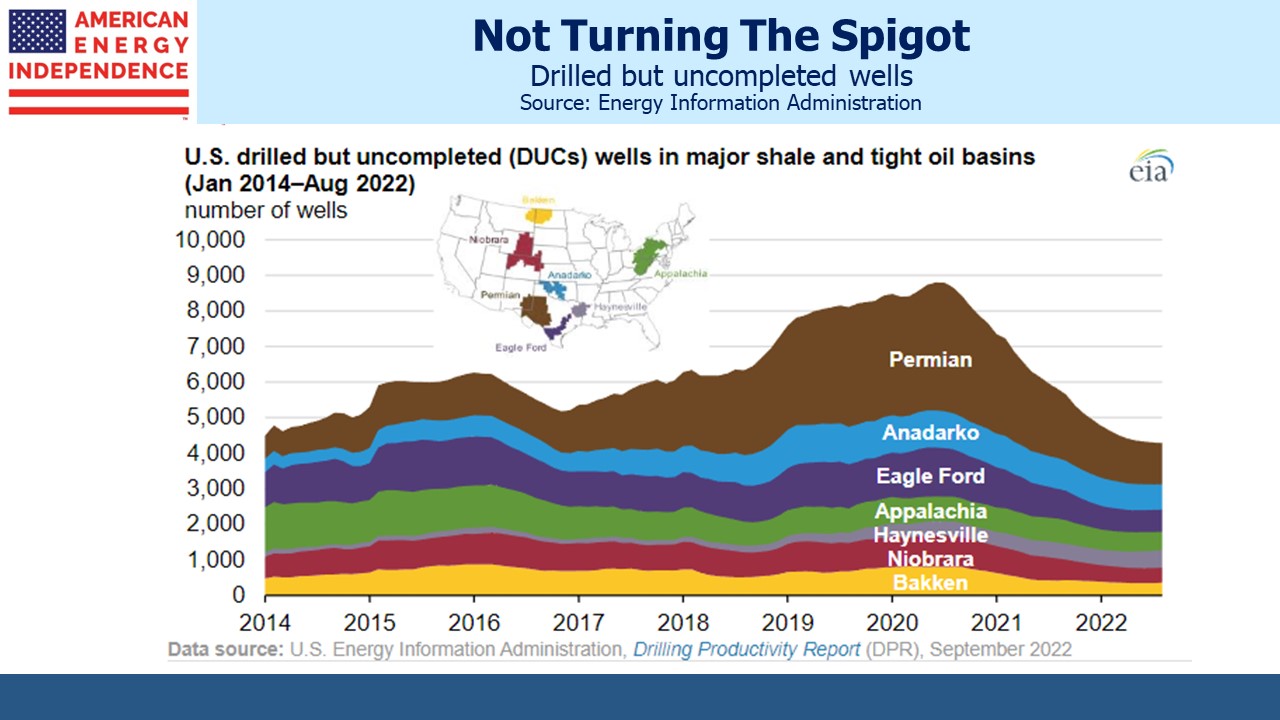 In the US, the number of Drilled but Uncompleted wells (DUCS) continues to slide, reflecting maintained capital discipline by US E&P companies and skepticism that concern about oil and gas supply will last beyond next month’s midterm elections. 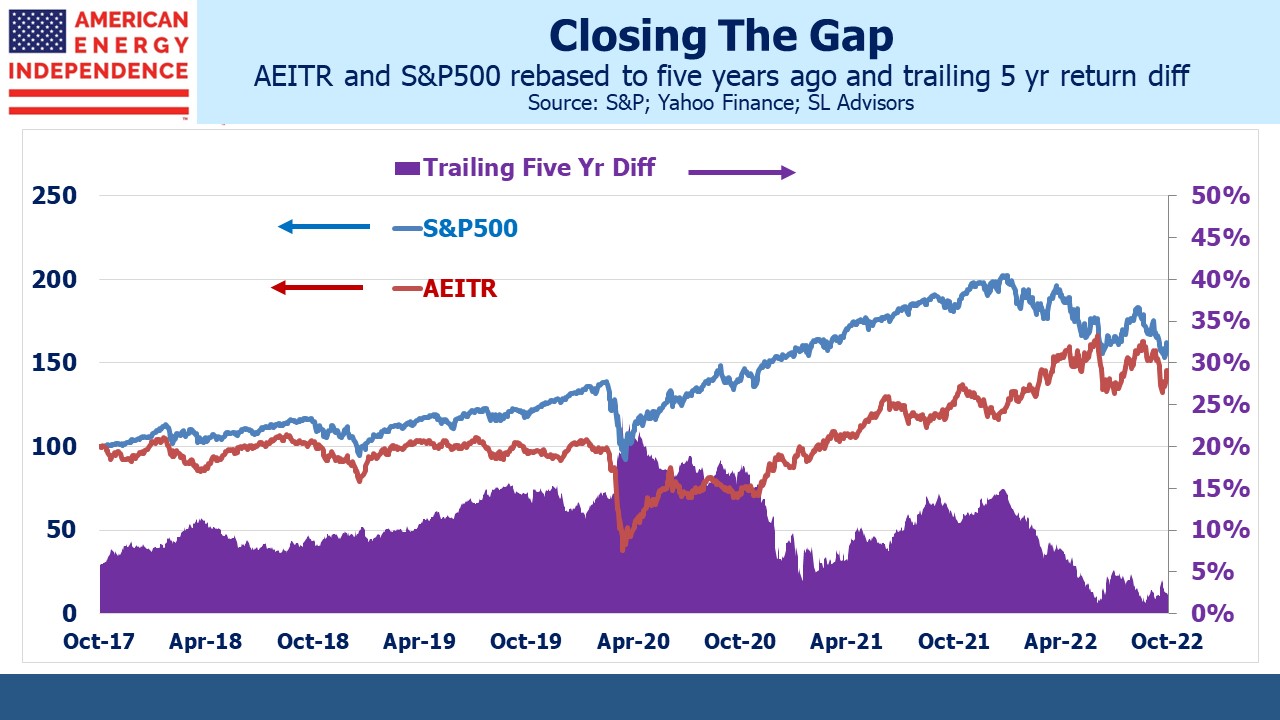 For casual observers energy has been an underperforming sector until recently. It may surprise some to learn that over the past three years midstream energy infrastructure as defined by the American Energy Independence Index (AEITR) has beaten the S&P500 by 4.3% pa. Over the past five years the underperformance gap has narrowed to 1.9% pa. At the end of last year, the AEITR trailing five year return lagged the S&P500 by a whopping 14.7% pa. On current trends it won’t be long before pipelines will be ahead of the S&P500 on this measure. 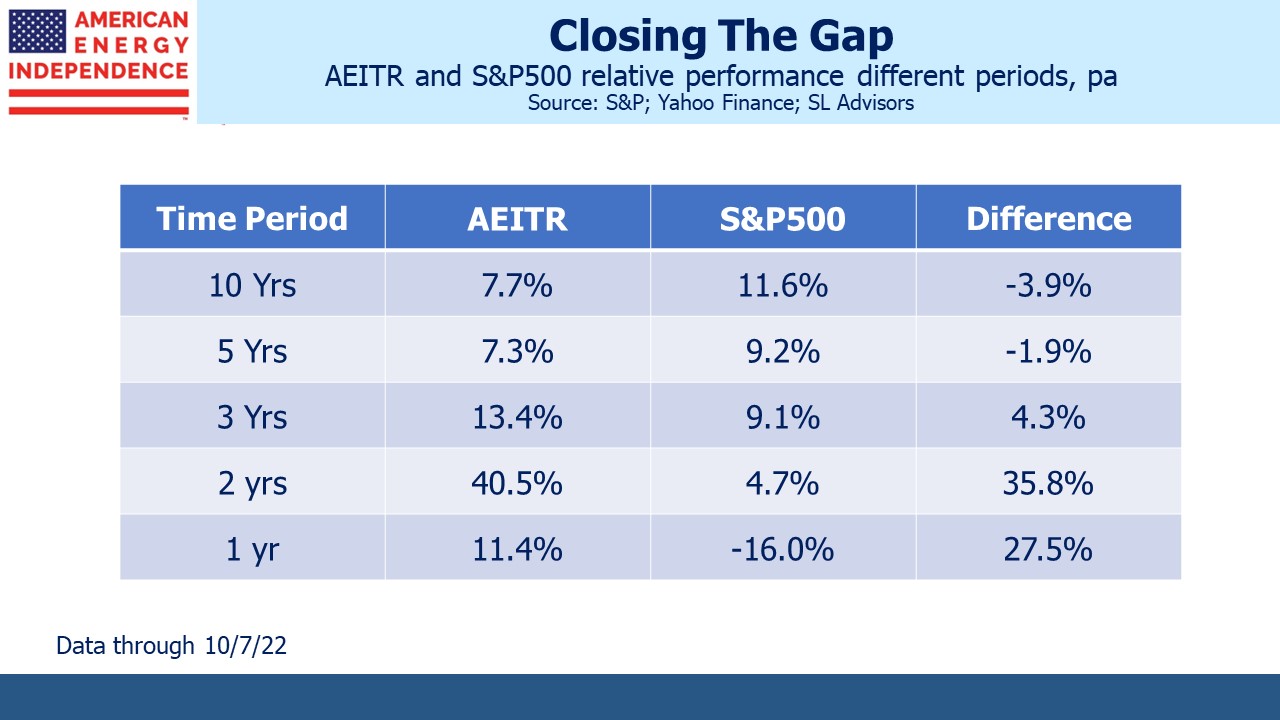 3Q earnings season should provide further evidence of strong dividend coverage, continued growth in cashflows, improving leverage and restrained growth capex.  In addition, the direct link to PPI incorporated in many pipeline contracts provides protection against inflation. In a sea of red ink this year, the sector is an uncommon source of green.