The Moral Case for Fossil Fuels

In the debate over global warming, the environmentalists claim the moral high ground while the “non-believers” deny man-made climate change. The very question of whether you “believe” in global warming suggests religious conviction with little point in debate. This is what makes Alex Epstein’s moral defense of fossil fuels so intriguing.

We have clients across the political spectrum, and it’s a safe bet that they’re with us looking for strong investment results with little care for our views on other topics. However, there are some who concede to a certain moral precariousness in putting their green credentials alongside investments designed to profit from America’s Shale Revolution. For them, Alex Epstein presents an intellectual framework for conscience-free investments in energy infrastructure. 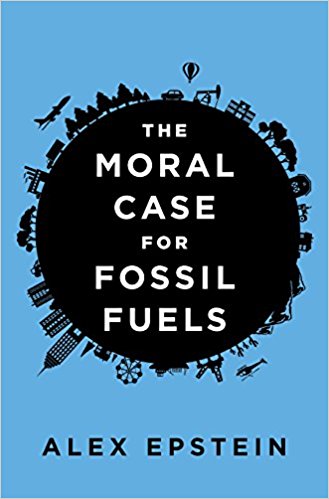 Epstein seizes the moral high ground by correctly defining the metric against which human development should be judged – namely, is it good for humanity? He argues that many environmentalists implicitly value human health and prosperity below other objectives, such as ensuring an unchanged environment. Cheap fossil fuel energy has powered an enormous leap in living standards, life expectancy and population over the past couple of centuries. He argues that humans have been changing their environment throughout history to make it safer and more receptive to human life. These undoubted benefits to the human race need to be balanced against the (oft-debated) environmental results. And while Epstein goes on to question to what degree human activity is warming the planet, the elegance of his insight is that the humanity standard allows one to be a fossil fuel supporting environmentalist. His preferred standard is, “What will promote human flourishing – realizing the full potential of life?” (italics in original).

Since burning fossil fuels supplies 81% of our energy needs, it’s reasonable to assume that government policies which impose constraints will increase the cost of energy through taxes or subsidies that favor renewables. The humanity standard doesn’t preclude this, it simply imposes a rigorous cost-benefit analysis. More highly priced energy may not damage human life in the developed world all that much, but in the developing world cheap, reliable electricity can mean life or death for hospital patients or a community in need of clean water.

Since cavemen lit fires and inhaled smoke while staying warm, humans have balanced energy use with changes to the environment. Still today, 38% of the world’s population uses traditional biomass for cooking, contributing to 3.5 million pre-mature deaths each year caused by household air pollution. Women and children disproportionately bear the cost to their health as well as spending enormous amounts of time gathering wood for fuel. 1950s London was notorious for thick fog caused by coal-burning homes and factories. Coal use was curtailed – Epstein’s standard doesn’t sanction unfettered pollution, it simply sets a standard against which to assess it.

As a society’s wealth increases, the trade-off shifts. When we’re safely housed against the weather, able to access sufficient food, water and medical care, concern for our natural surroundings can increase. But assuming humans are taking existential risks with the planet, a population without reliable electricity or clean water will more readily prioritize these over the environment compared with developed countries. In fact, the morality of fossil fuel use is strongest when applied to the poorest, whose lives are most easily improved. Advocates of the deepest cuts in global energy use must consider parts of the world using energy to reach western living standards. For example, in 2014 Secretary of State John Kerry, in a speech to Indonesians, exhorted them to “Make a transition towards clean energy the only plan you are willing to accept.” Such a call was no doubt well intentioned, but 33 million Indonesians lack access to safe water. Higher energy prices will hardly solve that immediate problem.

Globally, 1.2 billion people do not have access to electricity and have shorter life expectancy as a result, while many more don’t have access to reliable electricity. These people may rightly care about energy availability regardless of how it’s generated. Part of the moral dilemma revolves around sacrifices today to help later wealthier generations. It’s not an easy question, but is one that Epstein challenges his critics to consider more carefully.

The book does not question whether carbon dioxide emissions warm the planet but the degree to which they do, the consequences of such and the cost of cleaner energy on human life and the quality of human life today. This debate will probably continue beyond all our lifetimes and we’ll sidestep offering an opinion. Epstein offers some useful data to illustrate how humans have benefited from harnessing concentrated energy; the average human needs 2,000 calories a day to exist, roughly the same amount of energy required by a 100-watt lightbulb. As we go about our daily lives, we eat food produced and moved by machines; we are transported by machines and we occupy buildings whose construction relied on heavy equipment. Consequently, the average American’s daily machine energy use is 186,000 calories, or around 93 humans. Consider how energy has transformed agriculture, driving enormous increases in productivity and greatly decreasing the percentage of the population working on farms. Freed from a daily search for sustenance, humans have diversified into countless endeavors with time to create all the elements of industrialized societies. Fossil fuels have made modern society possible.

A key advantage of fossil fuels is their concentrated form. A gallon of gasoline contains 31,000 calories, the equivalent of a day’s energy for fifteen humans. By harnessing many multiples of our own physical ability, we have used hydrocarbons to shape our world. From the construction of the most rudimentary forms of shelter, we have adapted our environment to be protected from the elements.

The 2012 debate between Alex Epstein and Bill McKibben (a leading environmentalist), available on Youtube, probably changed few minds but nonetheless provided a useful public airing of views. CO2 emissions have risen along with fossil fuel use. But many measures of human well-being have improved including life expectancy, poverty and access to sanitation. It’s clearly not a coincidence. Every human, regardless of their opinion on climate change, wants a livable planet.

Whatever your views on human-caused global warming, The Moral Case for Fossil Fuels represents a useful step towards greater intellectual rigor on the topic.