As recently as five years ago, the terms “MLPs” and “pipelines” were interchangeable. If you wanted to invest in pipelines for their steady growth and attractive tax-deferred yields, you had little choice but to be a K-1 tolerant, MLP investor. MLP-dedicated funds were developed to provide retail exposure to the sector, but the corporate tax burden has contributed to their disappointing performance (see MLP Funds Made for Uncle Sam).

A far bigger contributor to poor performance has been years of distribution cuts to fund growth (see It’s the Distributions, Stupid). Income generating businesses became growth-seeking, as the Shale Revolution drove the industry to reinvest more of its cash in infrastructure. America’s energy renaissance broke the MLP model.

This has led to a steady diminution of the importance of MLPs to the midstream energy infrastructure sector, since many of the biggest have converted to be corporations (“c-corps”). This makes them available to a far wider pool of investors than MLPs, which still generally struggle to attract significant institutional support. 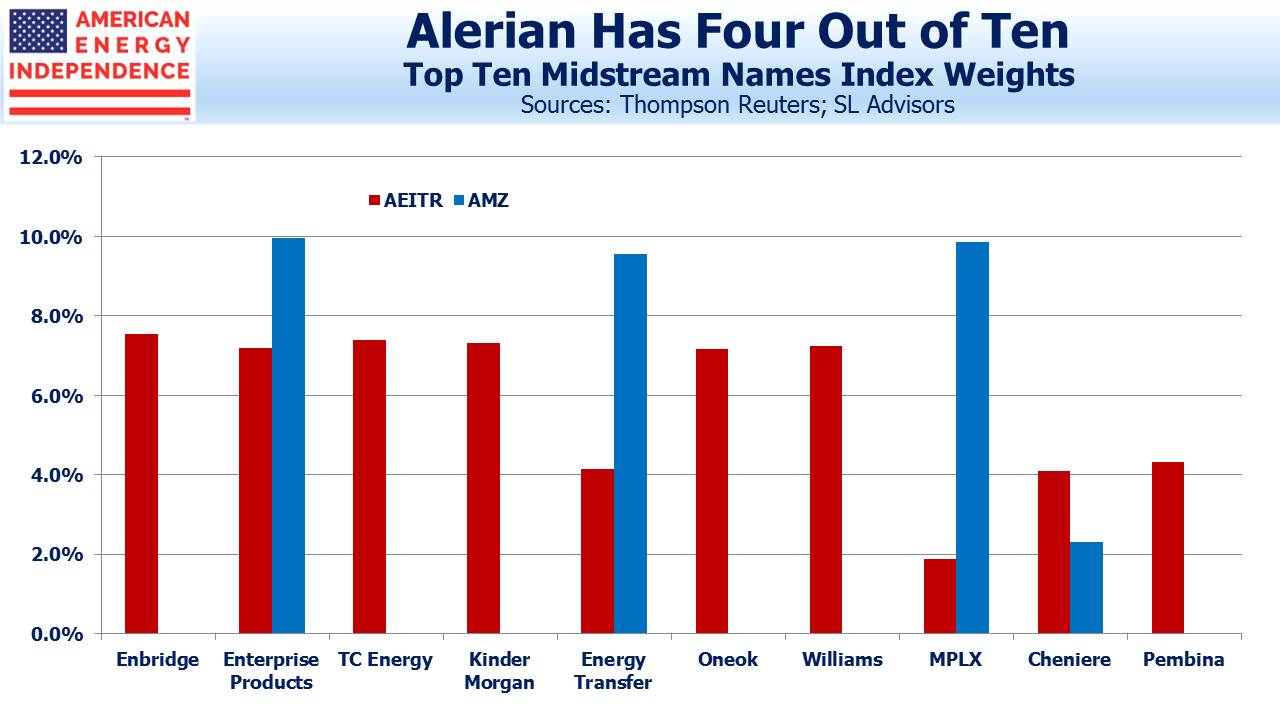 One consequence is that the Alerian MLP Index (AMZX) is becoming steadily less representative of midstream. This is why two years ago we created the American Energy Independence Index (AEITR), recognizing that MLPs are only part of the story. AEITR limits partnerships to 20%, reflecting their diminshing importance and allowing investment products linked to it to be fully RIC-compliant with no corporate tax burden. AEITR also excludes MLPs that are controlled by a General Partner (GP), because of the weak rights such MLP investors have as well as the dilutive payments (called incentive distribution rights) from the MLP to the GP.

The shift to corporate form for the industry has left AMZX including only four of the ten biggest names in the sector in its index – because most of the giants are corporations. It’s also led to it being more concentrated – 70% of the index is in only ten names (versus 60% for AEITR) and 49% is in only five (versus 37%). And the market cap of the underlying names in AMZX is $257BN, only slightly more than half the AEITR’s $490BN.

Investors are increasingly shifting to broader exposure, which is why corporations have been outperforming MLPs. This is illustrated by the AEITR (80% corporations) leading the AMZX (100% partnerships) by 7% over the past twelve months. 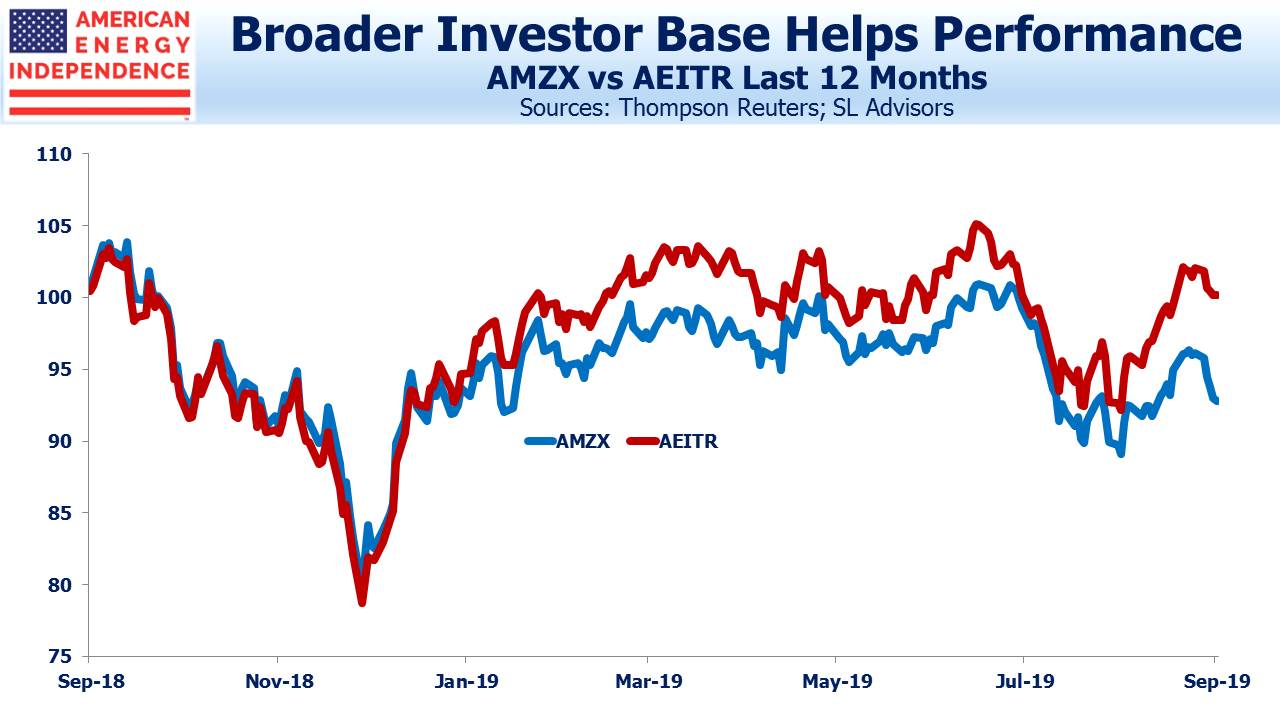 Partnerships provide weaker protections to investors, especially on issues of governance. It’s why Energy Transfer (ET) was able to award preferential securities to management three years ago (see Will Energy Transfer Act with Integrity, written when misplaced hope remained that they might). More recently, Tallgrass (TGE) showed that it’s not above self-dealing either, when it became apparent that Blackstone’s bid to acquire the 56% it doesn’t yet own would trigger a sale of management’s TGE units at a far higher price via a sideletter (see Blackstone and Tallgrass Further Discredit the MLP Model). Asset managers observe far higher ethical standards than some public companies.

Weak governance is why many institutions avoid partnerships. A research report from JPMorgan recently noted that, “…given the proliferation of corporate governance problems in the MLP space, many generalist investors will not entertain the notion of discussing MLPs in our investor conversations.”

In 2018 there were no MLP IPOs, compared with 20 in 2013 and 18 in 2014. This year Diamondback floated a minority interest in their midstream business as Rattler Midstream (RTLR), but that company elected to be taxed as a corporation, seeking to broaden its appeal by providing a 1099. However RTLR has a partnership governance structure, which means fewer rights for RTLR investors. 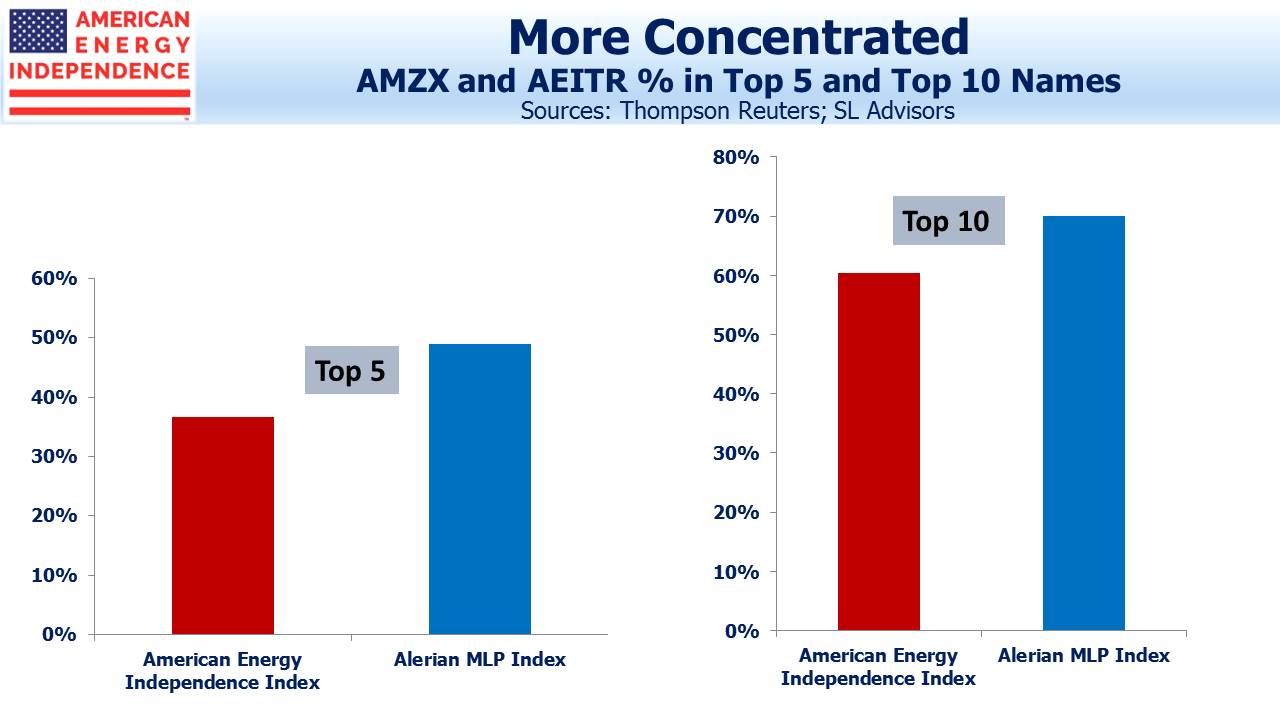 Over $50BN is invested in vehicles that track MLP indices, much of it in tax-burdened funds. JPMorgan reports $2.5BN in outflows over the past year. The shrinking pool of MLPs is making them less representative, and poor performance has led to outflows, which in turn weighs on pricing.

Changing to a more representative index would require these funds to dump MLPs, which would further depress MLP valuations. As a result, Alerian continues to talk up the MLP structure with blogs such as the sycophantic TGE: Take-Private Bid Highlights Continued Private Equity Interest in Midstream. There’s no mention of the controversial sideletter noted above. 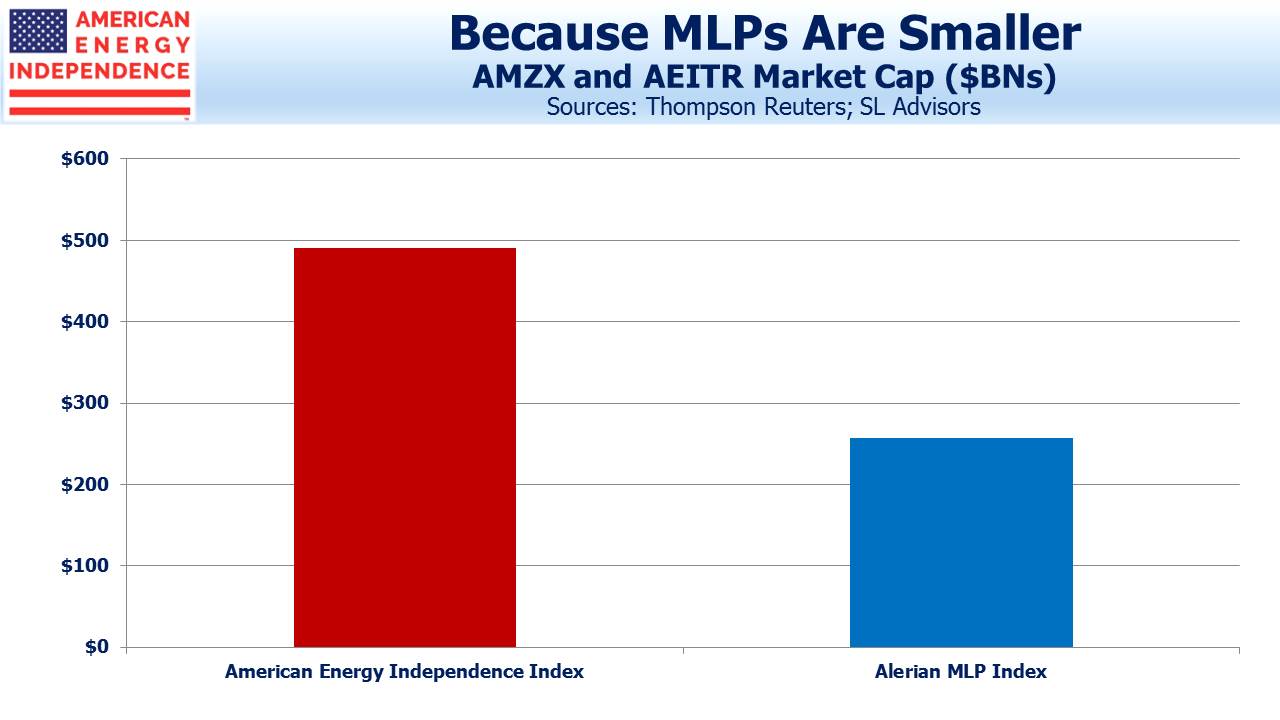 There continue to be some good MLPs, such as Enterprise Products Partners (EPD), Magellan Midstream Partners (MMP) and Crestwood Equity Partners (CEQP). Some that are closely held see little value to incurring a corporate tax burden (see Pipeline Billionaires Cling to Partnership Model Others Shun).  ET is well run but undervalued, reflecting the perceived risk to investors of more questionable dealings by management. MLPs with a history of fair dealing receive a higher valuation than others. But poor governance remains a headwind to greater investor interest.

Surprisingly, ESG funds own several large midstream corporations including Kinder Morgan (KMI), Oneok (OKE) and Williams Companies (WMB) (see Improving disclosures is key to ESG investment in midstream, analysts say). Partnerships are not among the names held by ESG funds, because on “G” (Governance), they come up short.

Pipelines are no longer synonymous with MLPs, even though many funds behave as if they are. Fund flows and relative performance show investors are taking notice.

We are invested in CEQP, EPD, ET, KMI, MMP OKE, TGE and WMB