MLPs and Hedge Funds Are More Alike Than You Think

It usually pays to invest with management. In the hedge fund industry that has rarely been possible. Although most hedge fund managers invest in the fund they run, their wealth has come from owning the hedge fund General Partner (GP), which manages the fund. Opportunities to invest in hedge fund GPs are rare; they don’t need your capital and have little desire to share the lucrative economics.

In 2012 I wrote The Hedge Fund Mirage; The Illusion of Big Money and Why It’s Too Good To Be True. The book pointed out what most hedge fund managers know – that hedge funds have been a great business and a lousy investment. Fees have eaten up virtually all the investment profits. Money still flows to hedge funds, because there are and always will be some good ones. But the farther you stray from a unique, specialized strategy the more prosaic your returns. The book drew some nice reviews and provoked few critics, because most industry insiders preferred to minimize awareness of the lopsided split of investment returns. Being controversial turned out to be great fun, and caused us to think differently about another asset class. 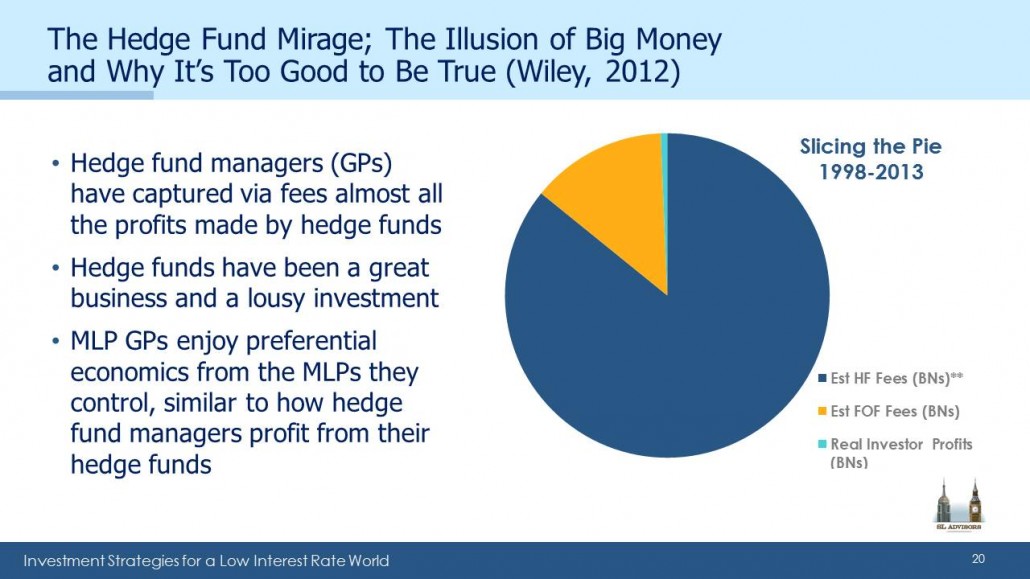 Master Limited Partnerships (MLPs) look like hedge funds. Although they own actual infrastructure assets rather than stocks, bonds and currencies, they share their organization as partnerships with hedge funds and private equity. MLP investors, like Private Equity (PE) fund investors, have limited rights. They’re called “Limiteds”, because Limited Partners (LPs) have little recourse once they’re invested (see The Limited Rights of Some MLP Investors). 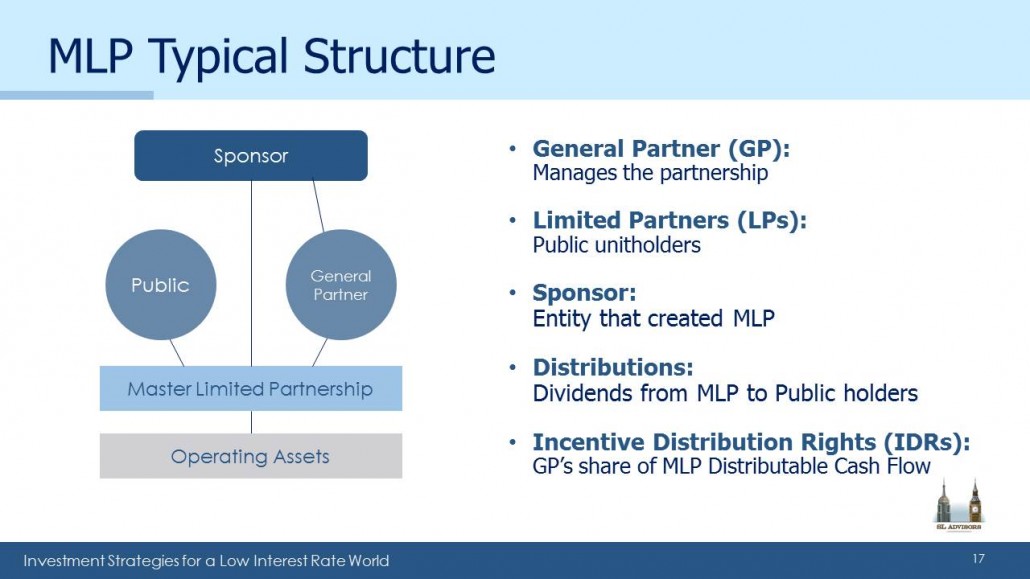 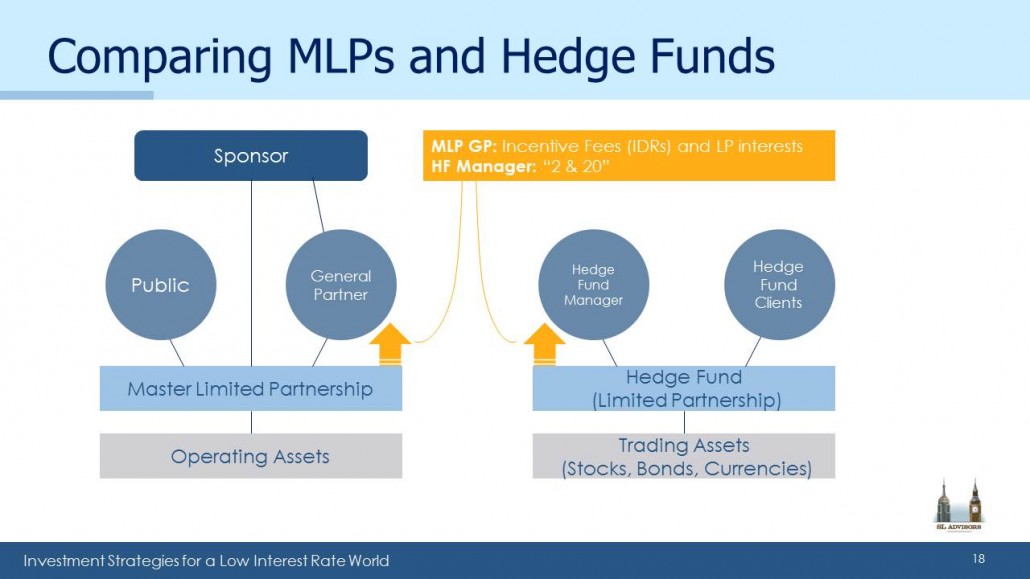 Not all MLPs have a GP, but many do and given how well hedge fund managers have done it’s no surprise that the people who run MLPs prefer to invest in the GP. The issue doesn’t receive much attention, but research we’ve done shows that in a select group of MLPs (i.e. those we care about) management has 25X as much money invested in GPs versus LPs. 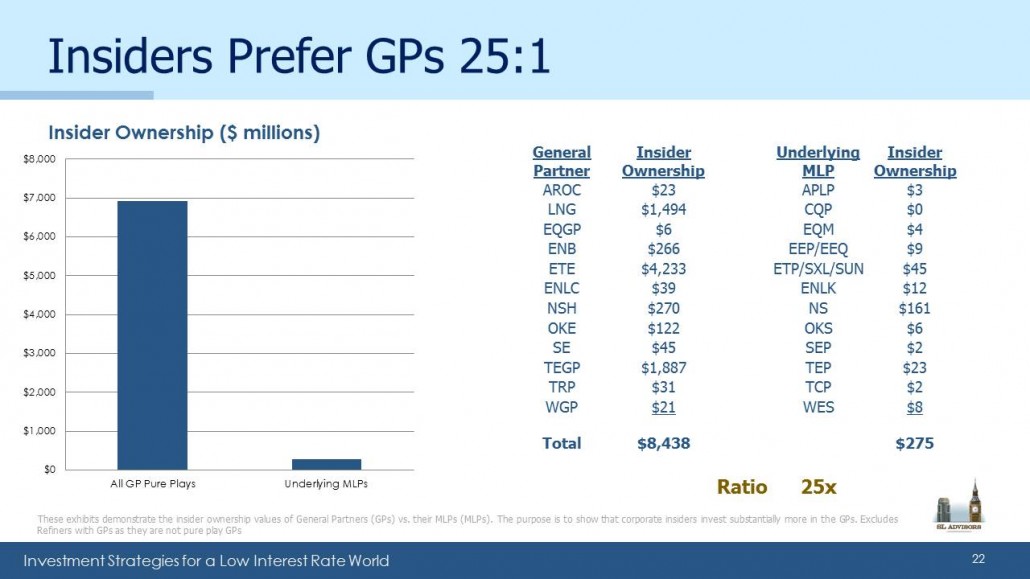 Hedge funds and PE funds classically pay their GP “2 & 20”. This 2% management fee and 20% of the profits means, for example, that an 8% return after fees required a 12% return before fees. The 4% difference goes to the manager. MLPs pay their GPs Incentive Distribution Rights (IDRs), which direct a portion of the MLP’s Distributable Cash Flow (DCF) to the GP. The DCF split typically starts low but goes up to 50%, so the GP’s share can tend towards half.

The power of this becomes clear when you consider the financing of a new pipeline. GPs direct their MLPs to do something, the same way a PE manager directs his PE fund. A new pipeline is designed, planned, built and operated by an MLP on instructions from its GP, who then receives his share of the additional DCF created. Asset growth for PE managers is invariably beneficial, and it’s generally true as well for MLP GPs.

The best time to own hedge fund, PE or MLP GPs is during periods of asset growth. The Shale Revolution (see America Is Great!), with its growing output of crude oil, natural gas liquids and natural gas, is driving the need for more infrastructure assets. Recognition of this is behind the 25X statistic noted above. 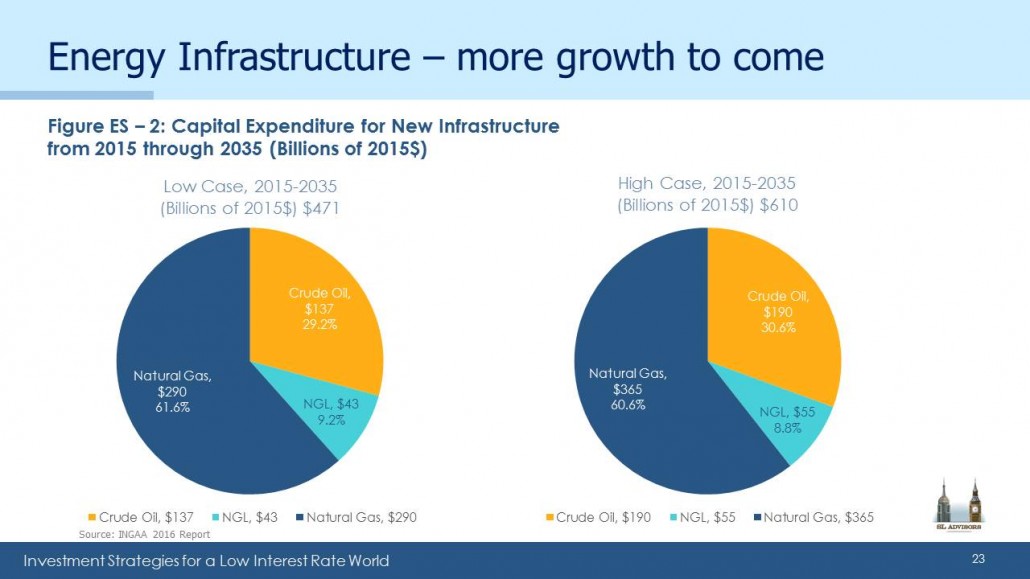 It’s not a perfect analogy. For example, hedge fund investors have in aggregate done rather poorly, whereas 10 year MLP returns of 7.2% are better than REITs, Utilities and Bonds. Since MLP’s generally only raise equity from taxable U.S. investors tolerant of a K-1, they are limited to this relatively small portion of the global equity market. Those MLPs whose growth plans required several $BN have given up the lucrative GP/MLP structure in favor of being conventional corporations. But, as the 25X table shows, a decent number find the MLP structure still works.

At the MLPA Conference in Orlando a few weeks ago, questions usually concerned near term fluctuations in demand for one asset or another. We think the big trade here is America’s Path to Energy Independence, and owning GPs that benefit from continued infrastructure development. Conference chatter as well as attractive valuations show that it’s not yet a crowded trade.