We hear so often how energy infrastructure is all about pipelines and storage assets with fee-based contracts that when another part of the business pops up it can cause quite a stir. So it was that Plains All American (PAGP), one of the biggest crude oil pipeline operators in the U.S., provided an unwelcome example of the uncertainty surrounding one aspect of their business. Accelerating changes in the marketplace adversely affected their Supply and Logistics segment, such that PAGP thought it worthwhile holding their Wednesday morning earnings call on Tuesday evening, immediately following their earnings release.

Supply and Logistics involves taking temporary ownership of crude oil, Natural Gas Liquids (NGLs) and natural gas with the objective of unloading it elsewhere for a profit. The idea is not to make money from price moves, but rather to generate a profit from known inefficiencies in the transportation network. If you can buy crude oil at point A for $45 a barrel and sell it at point B for $48 while spending less than $3 on storage, transportation and overhead, it can be a profitable business. It has been so in the past; in 2013 PAGP generated $893MM in EBITDA from this activity, although its profits have been declining since. It is in effect a profit from inefficiency of the domestic transport network. If crude is worth $3 more at point B compared with point A, the cost of transport should be around $3, or crude will flow until the arbitrage is eliminated.

The problem, as PAGP belatedly discovered, is that the market is becoming more efficient. Three years ago Congress lifted the ban on crude exports, which removed one significant inefficiency. Patches of excess pipeline capacity further challenged arbitrage opportunities by providing shippers with more choices. More recently, a flattening of the crude oil futures curve along with lower volatility reduced opportunities, as did more competition. Several other firms have de-emphasized or exited the business over the past couple of years. 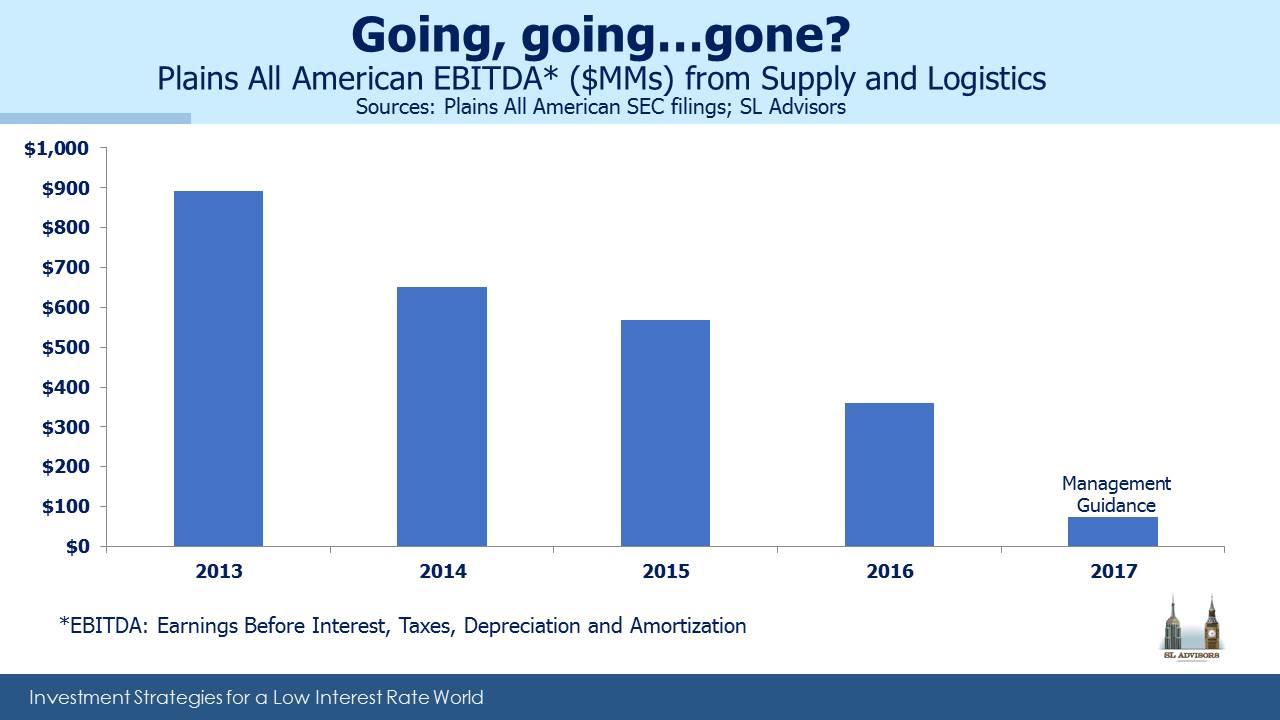 The deep disappointment no doubt felt by PAGP CEO Greg Armstrong and those who know him is that they didn’t see this coming. Plains is better positioned than most to see first-hand changes in the supply and logistics of hydrocarbons. They pride themselves on a very sophisticated view of shifts in the marketplace. Three months ago a weak first quarter in this segment was partly blamed on warm winter weather. Propane held in inventory anticipating stronger prices had to be sold on weakness.

The outlook for profits in Supply and Logistics is so uncertain that PAGP says they’ll likely exclude it from their calculations of Distributable Cash Flow (DCF), the metric underpinning their distribution. They’re currently forecasting only $75MM this year. Although a strategic review is underway and will likely take a couple of months, the Facilities and Transportation businesses can only support a payout of around $1.80 per share (albeit with 1.1X coverage), down from $2.20 currently. Plains cut their distribution last year when combining their MLP and GP, so this likely represents a second cut in two years. Another management team’s reputation is shredded. Greg Armstrong will not care to be compared with Rich Kinder who also oversaw two dividend cuts in as many years at Kinder Morgan, but many investors will see little between them. In both cases a seasoned CEO has been shown to poorly anticipate changes in a business in which he’s spent his entire career. If Greg Armstrong didn’t see it coming, it’s hardly surprising that PAGP investors didn’t either.