New England’s largest utility, Eversource, is worried about a looming shortage of natural gas. CEO Joseph Nolan has publicly asked the White House to make plans for emergency supplies in the event of a severe cold spell this winter.

North America has abundant supplies and export volumes will grow. Europe is gearing up to increase its imports of Liquefied Natural Gas (LNG). Germany expects to begin taking deliveries at its first Floating Storage Regasification Unit (FSRU) in Lubmin by the end of the year. Britain has just officially banned Russian LNG although in practice this happened in February when Ukraine was invaded. 1.2 million tonnes of LNG (58 Billion Cubic Feet, equivalent to around 60% of US daily production) is in ships offshore Europe awaiting delivery to the few import facilities available (mostly in Spain).

Prices have slumped recently, with the US Henry Hub benchmark at $5, having briefly reached $10 during the summer. The world is not short of natural gas, although global prices remain several multiples of the US. Why is Eversource worried? Why aren’t there enough windmills in Massachusetts to plug the gap?

In 2016 Kinder Morgan abandoned its proposed North East Direct pipeline that was intended to link Boston with the enormous reserves in Pennsylvania’s Marcellus shale. Opposition from environmental extremists was led by Senators Elizabeth Warren and Bernie Sanders. Since then New England has suffered from inadequate pipeline capacity linking it to cheap, domestic reserves. Democrat opposition to reliable energy rarely confronts demand, relying instead on the misplaced conviction that solar and wind will provide cheap power along with well-paid union jobs.

As a result, in order to keep the lights on companies like Eversource have resorted to seaborne imports of LNG, the only place in America compelled to do so. Now that Europe no longer buys from Russia, there’s new competition for supplies. The Jones Act, which restricts trade between US ports to US-owned, built and crewed vessels, forces Boston to import LNG from places such as Trinidad and Tobago instead of Louisiana or Texas. In the past they’ve even bought from Russia.

Energy policies that resemble anything New Englanders have adopted should be firmly opposed by those of us who value reliable energy at a reasonable price. The virtue signaling that leaders in Massachusetts embrace has had no discernible impact on China, consumer of half the world’s coal where Green House Gas (GHG) emissions (28% of global total) remain on an upward trajectory. US GHGs have been falling for over a decade, mostly through painlessly using more natural gas (New England take note) and less coal. Should China follow through on its commitments to manage peak GHGs in 2030, masochistic energy policies in Boston will have simply enabled a later enactment of such pledges. And should developing countries’ GHGs (and therefore global) keep rising, climate extremists will have achieved nothing at great expense.

The cancellation of the PennEast pipeline last year that was supposed to bring cheap Pennsylvanian gas to New Jersey was celebrated by climate extremists and Governor Phil Murphy. It is an example of New England energy policies polluting New Jersey. It’s why people with money and limited family ties are sensibly moving south. New Jersey would be better off if the Democrats moved north.

The energy sector has benefitted from the more extreme policy prescriptions of the Democrats and the ESG movement (watch ESG is a scam). The American Energy Independence Index (AEITR) continues to make up ground on the S&P500, with their five year trailing returns now almost the same. We think circumstances continue to support outperformance of North American midstream energy infrastructure. 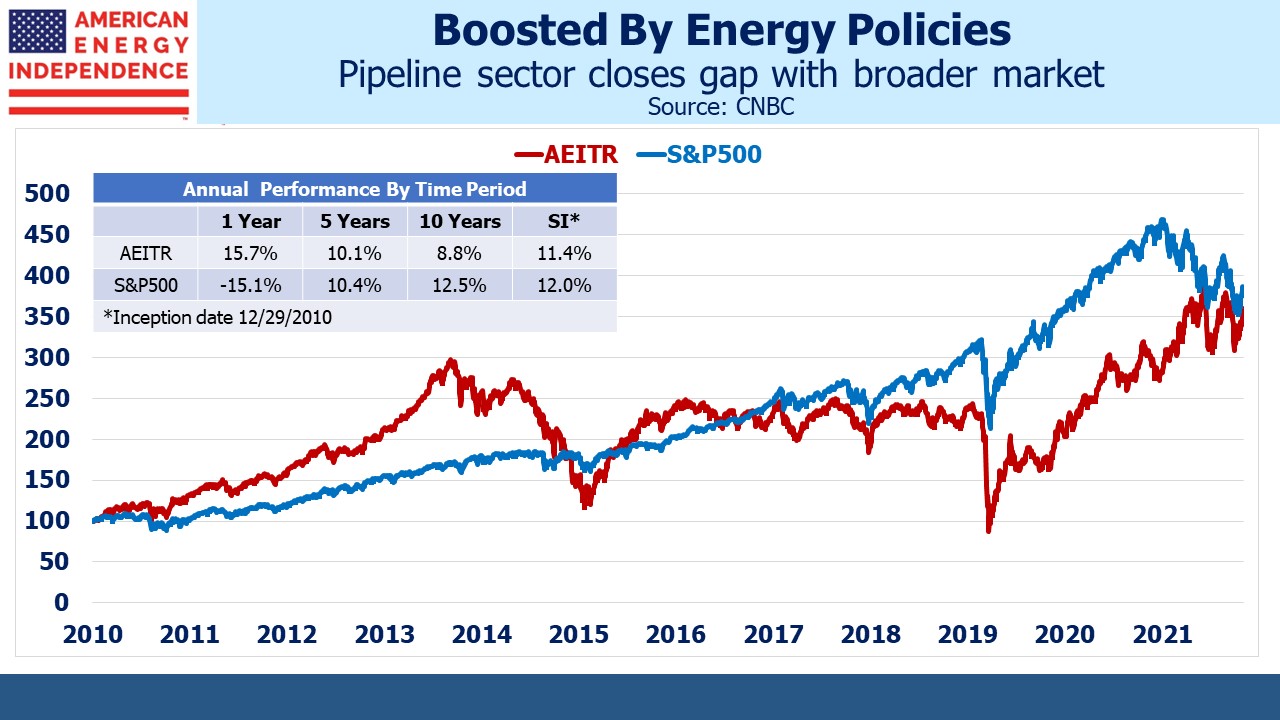 In the US the Tennessee Valley Authority (TVA) is planning to add 20 small modular nuclear reactors by 2050. TVA president Jeff Lyash thinks several hundred similar reactors will be needed across the US to deliver carbon-free power. Nuclear power is reliable and has a small footprint, the antithesis of solar and wind.

I have an erudite friend whose text messages send me to Dictionary.com so I can understand them. We’ll call him The Scouser, whose command of the English language belies this moniker. He recently lamented the peripeteia currently endured by English Premier League club Liverpool, who languish at midtable in a sharp reversal of fortune compared with last season. This blog is dedicated to helping inflict an overdue peripeteia on misguided climate extremists. Their policy prescriptions underpin today’s energy crisis.