Every investor is aware that the market’s been volatile recently. The VIX is high but converting it into typical daily moves isn’t intuitive. Several readers like the chart below, which shows what % of the last 100 trading days have seen the market move by more than 1% in either direction. It’s currently 55, so more than half of the past 100 trading days have seen such a move.

The prevalence of this “more likely than not to move 1%” metric is unusual; over the past quarter century such a regime has prevailed only 8.5% of the time. We’re approaching the volatility that Covid caused, but still short of the 2008-09 financial crisis. This metric is indifferent to direction, but it peaks during bear markets because volatility induces selling. 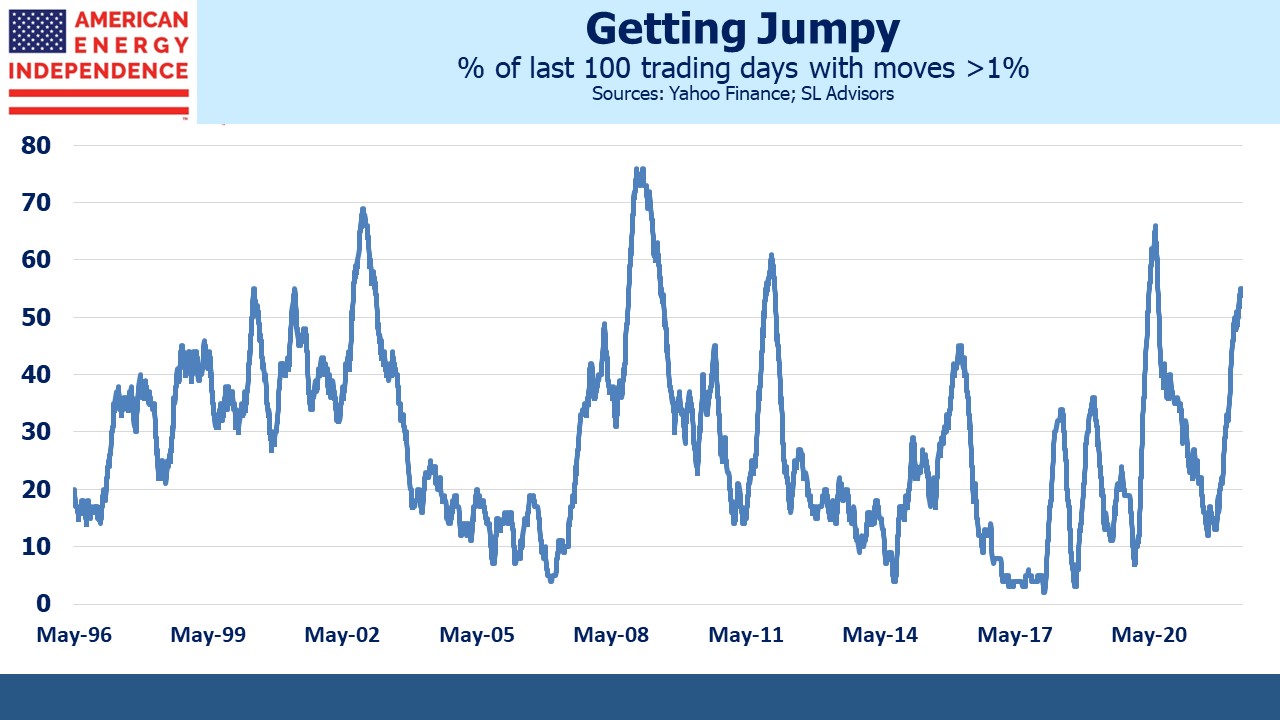 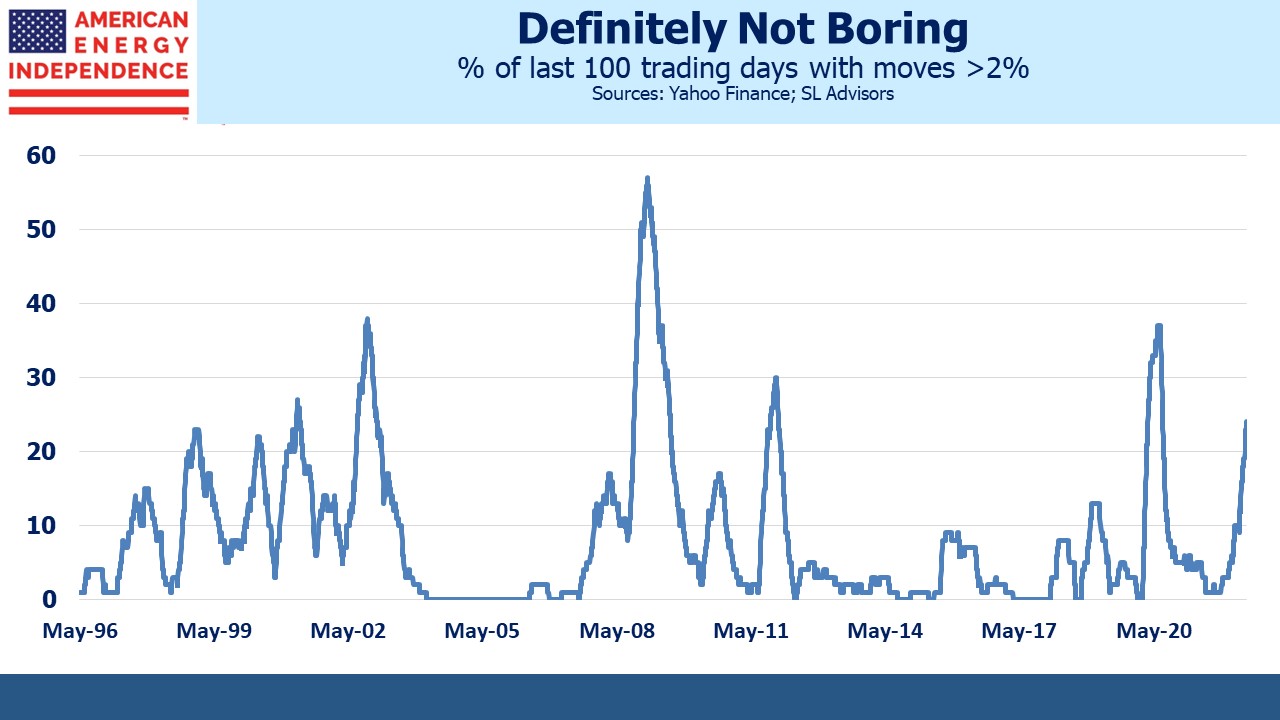 The drop in markets this month has been especially hard on the energy sector, although the American Energy Independence Index is still +11% YTD. Increased odds of a recession have hurt cyclical stocks, and midstream energy infrastructure has been dragged down in the process. The Fed is entering a tricky stage – having made one policy mistake in being too slow to confront inflation, they’re trying to fix it without committing a second error. Their critics have momentum, because so far they’ve been right. Former NY Fed chief Bill Dudley warned that The US Economy Is Headed for a Hard Landing.

In Senate testimony Fed chair Jay Powell conceded that a recession was possible and avoiding one depended on factors outside the Fed’s control. Cynics may regard this as preparing the next set of excuses. It’s easy to see events unfolding such that the Fed loses the few friends it has. Senator Elizabeth Warren offered a preview of what may become criticism not limited to the left: “You know what’s worse than high inflation and low unemployment? It’s high inflation and a recession with millions of people out of work,”

The 60% of CEOs that expect a recession within eighteen months assume that the Fed will overdo tightening.

Whether the consensus turns out to be right or not, the fundamentals for the energy sector keep improving. Unsurprisingly, Russian natural gas supplies to Germany through Nord Stream 1 are down sharply. It was never plausible that Russia would co-operatively keep the gas flowing right up until Germany no longer needed it. Rationing of natural gas supplies is looming as German citizens pay the price for decades of poorly advised energy policy.

A string of US Liquefied Natural Gas (LNG) deals were announced last week. Cheniere decided to move ahead with an expansion of their Corpus Christi LNG export facility. Chevron signed purchase agreements with Cheniere and Venture Global to buy 2 million tonnes a year of LNG from each of them.

Germany is considering expropriating part of the Nord Stream 2 natural gas pipeline that Russia’s Gazprom built but has never been used. That part of Nord Stream 2 that is on German territory might be cut off from the rest of it and repurposed to facillirate LNG imports.

Japan announced that they will stop offering low-interest loans to developing countries to build new coal-burning power plants. According to Bloomberg, Japan accounted for more than half of the $6.6 billion of coal support from G-7 countries in 2019. No meaningful progress on emissions reduction is likely without persuading emerging economies to reduce coal consumption. Cutting off cheap financing is at least consistent with that goal. It will make natural gas power plants more attractive.

Berkshire Hathaway added to its stake in Occidental Petroleum, taking advantage of recent weakness. Berkshire now owns 16.3% of the company.

Research from Wells Fargo estimates that approximately 55% of midstream EBITDA has built-in inflation escalators. Liquids pipelines are often regulated by FERC, which permits tariff increases based on the PPI (currently running at 11%). Among the companies best positioned to benefit from this are are MPLX, Oneok and Magellan Midstream. Wells Fargo expects this inflation protection will boost midstream sector EBITDA by around 5.3% this year, a permanent step-up in EBITDA since negative PPI is implausible.

This is why pipelines offer useful protection against higher inflation. If the Fed beats the consensus and is successful in avoiding a recession, it’ll probably be because economic weakness induces a premature declaration that inflation is vanquished. Real assets will offer valuable upside in such a scenario.