To the twin certainties of death and taxes, the energy investor might add increased US exports of Liquefied Natural Gas (LNG). The outcome of Russia’s invasion of Ukraine is far from certain, but it’s hard to envisage Europe ever relying on Nord Stream 2 for natural gas. Moreover, once the flows from Nord Stream 1 stop – and at 20% of capacity they almost have – any future volumes of natural gas from Russia will not represent a critical part of Europe’s overall supply.

It’s rare for the flaws in a widely accepted public policy to be so cruelly exposed. Brexit always looked like a shot in the foot, an impulsive response to excessive immigration dressed up as a jingoistic rejection of an EU that constrained Britain’s true potential. Now UK GDP growth is 19th out of the G20, ahead of only Russia. Scotland will likely vote for independence next year, seeking their true potential unshackled from London. The reunion of the island of Ireland also looks increasingly likely within a decade or so.

Brexit will eventually undo the 1707 Act of Union that joined England with Scotland, and the Acts of 1800 that added the entire island of Ireland to Great Britain. Northern Ireland, born in 1921 out of persistent unrest and confirmed in the 1998 Good Friday agreement, rejected Brexit which means they picked Ireland inside the EU rather than England outside of it. Britain’s English rural majority imposed its Brexit will on diminutive nation-appendages as well as urban London. Once the others have left, fka Great Britain’s GDP will be closer to Canada than Germany. Like people, countries make mistakes too.

Similarly, Germany’s national security rested unsteadily on an unwavering belief that engagement with Russia through trade would ultimately lead to shared values if not a huge eastern liberal democracy. Angela Merkel, only the last in a succession of German leaders not burdened with self-doubt on the matter, faces a retirement of speeches in staunch defense – or few public speaking engagements at all. 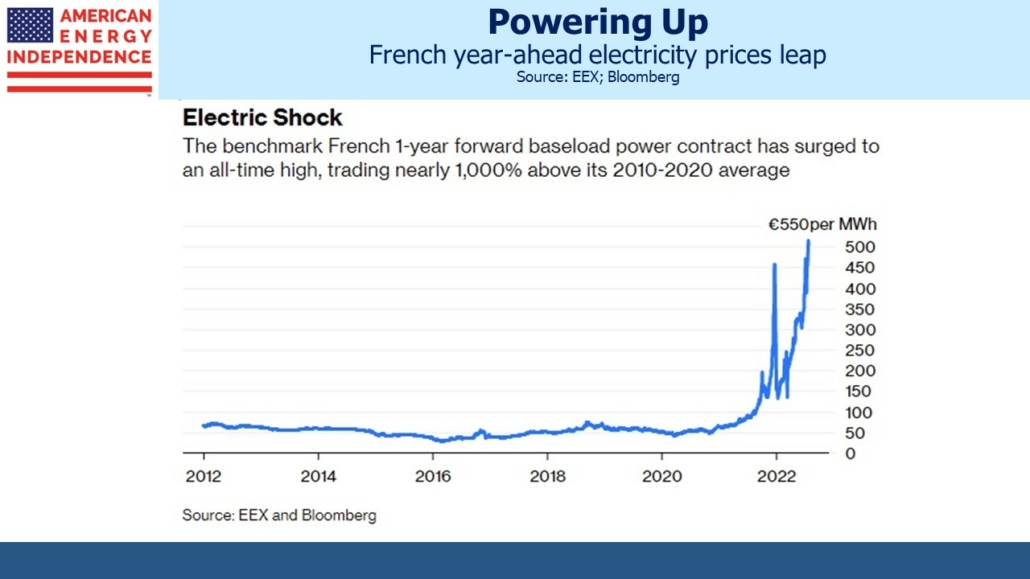 US energy investors are the beneficiaries of Europe’s geopolitical mis-steps on energy security. Because EU policymakers also believed the world’s poorer countries would soon insist on growth via renewable energy or none at all, they pursued intermittent power to inspire others. The consequences of these twin policy failures include year-ahead power prices in France up 10X. Renewables penetration is correlated with European electricity prices. Leaders in developing countries, most obviously China, fear popular unrest at slow growth more than shame at failing to emulate hubristic Germany. 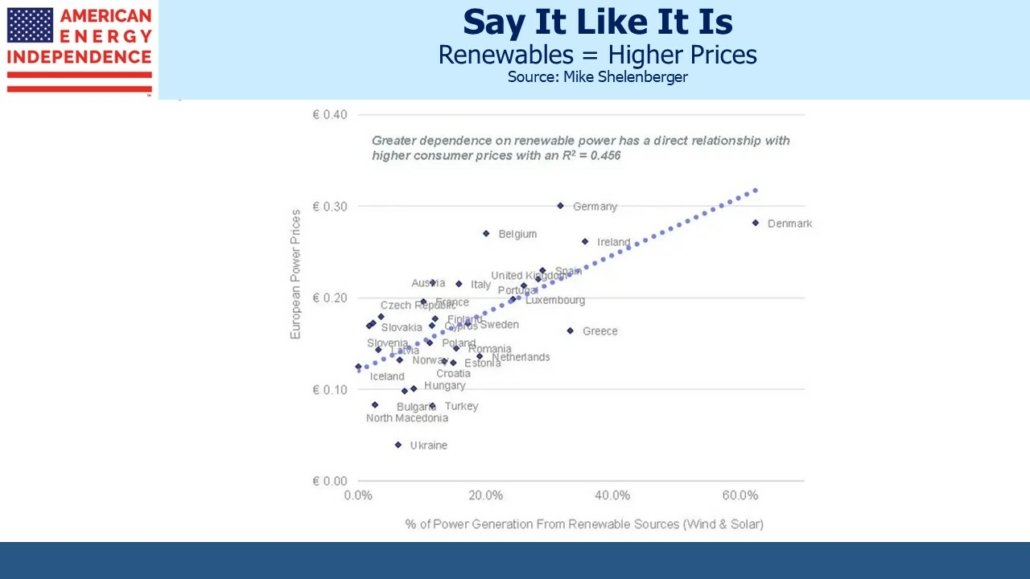 US natural gas is the opportunity to express this geopolitical analysis as an investment view.

Cheniere Energy is the obvious beneficiary. They export half of our LNG and have the lowest maintenance capex as a % of EBITDA of any midstream infrastructure company. They’re well positioned to fulfill Asian contracts that often run to two decades while growing free cash flow.

To this observer, LNG prevails over ESG nowadays in pipeline company presentations, reflecting a triumph of substance over style. To wit, in Williams Companies’ 2Q22 investor presentation, LNG appears 15 times and ESG two. One might call this a Seriousness:Frivolity ratio, or S/F, of 15:2. Kinder Morgan’s 2Q22 earnings press release S/F was 8:0. Enbridge had an S/F of 46:10 in their 2Q22 earnings presentation.

For Williams Companies, this preponderance of substance translates into nine projects to transport natural gas to LNG export facilities, with estimated in service dates all within five years. They see 1H22 LNG plus Mexican pipeline exports up over 10% year-on-year. They expect LNG exports along their Transco natural gas pipeline corridor to double by 2035.

Kinder Morgan claims to move half of US natural gas destined for export as LNG. Their growth projects include supplying Venture Global’s Plaquemines LNG facility, which just received its final investment decision in May.

Enbridge expects to almost triple its LNG exports by 2040. It’s not just in the US that it’s growing. Enbridge will supply natural gas to Woodfibre LNG, currently under development near Vancouver.

For those who find normal energy sector volatility tame, NextDecade is closing in on a final investment decision on their Rio Grande LNG export project in Brownsville, TX. They regularly issue press releases announcing new “sale and purchase agreements”, most recently with Exxon Mobil. This had an S:F ratio of 27:2, even though NextDecade’s ESG credentials are solid because they plan to capture the CO2 emitted as they convert methane into LNG.

If you possess unshakeable conviction that the abrogation of Germany’s policy of energy engagement with Russia is irreversible, NextDecade offers a pureplay bet on the consequences. 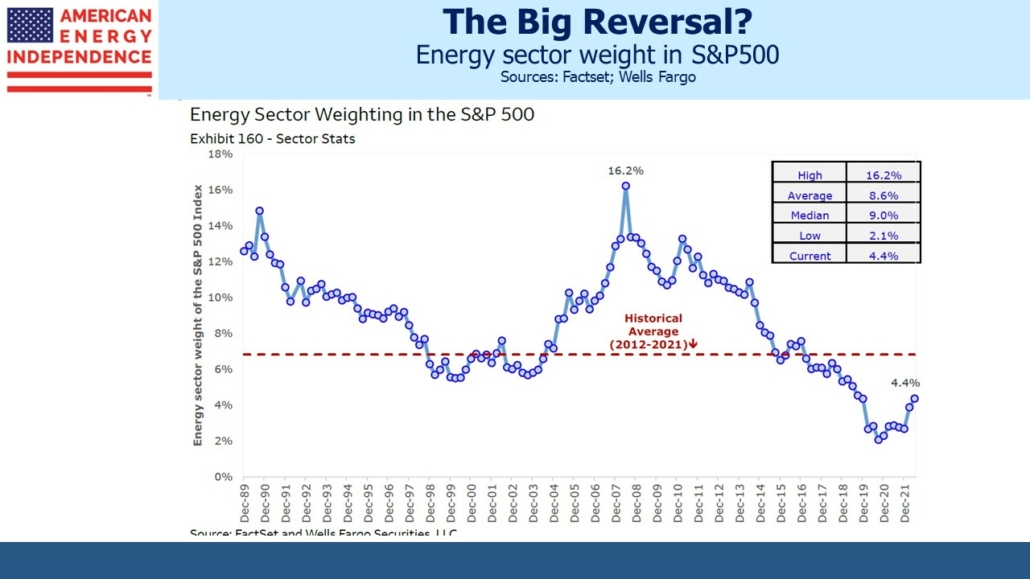 Energy as a share of the S&P500 has doubled from its 2020 low but remains well below the long-term average.