Managers of client capital invested in midstream energy infrastructure have had to explain recent weak performance to investors frustrated at missing out on the buoyant S&P500. We summarized the many conversations we’ve had last week (see When Will MLPs Recover?). The sector is up this year, although investors in MLP-only products like the Alerian MLP ETF (AMLP) are lagging the stock market by 25%, and pipeline corporations by 14%.

Energy remains out of favor to be sure, but midstream energy infrastructure bankruptcies remain rare. As much as fund outflows have pushed equity valuations to levels indicating financial stress, bond investors don’t share the angst. Long term investment grade debt in many cases yields less than the dividend on a company’s common equity.

If schadenfreude is your thing, consider the portfolio managers of Global Infrastructure Partners’ (GIP) GIP III fund. In July of last year, they invested $3.125BN into Enlink Midstream LLC (ENLC) and Enlink Midstream Partners, LP (ENLK). Following a simplification a few months later, GIP III wound up with 46.1% of ENLC, the surviving entity, and control of the managing member. $1BN of the $3.125BN was funded with a term loan, because private equity investors always add debt to juice their returns. So GIP III invested $2.125MM of equity.

We don’t use leverage ourselves. Midstream energy infrastructure businesses already operate with leverage that credit rating agencies assess in setting their credit ratings. To add borrowings on top is to reject the agencies as needlessly pessimistic. GIP III wanted a little more upside. 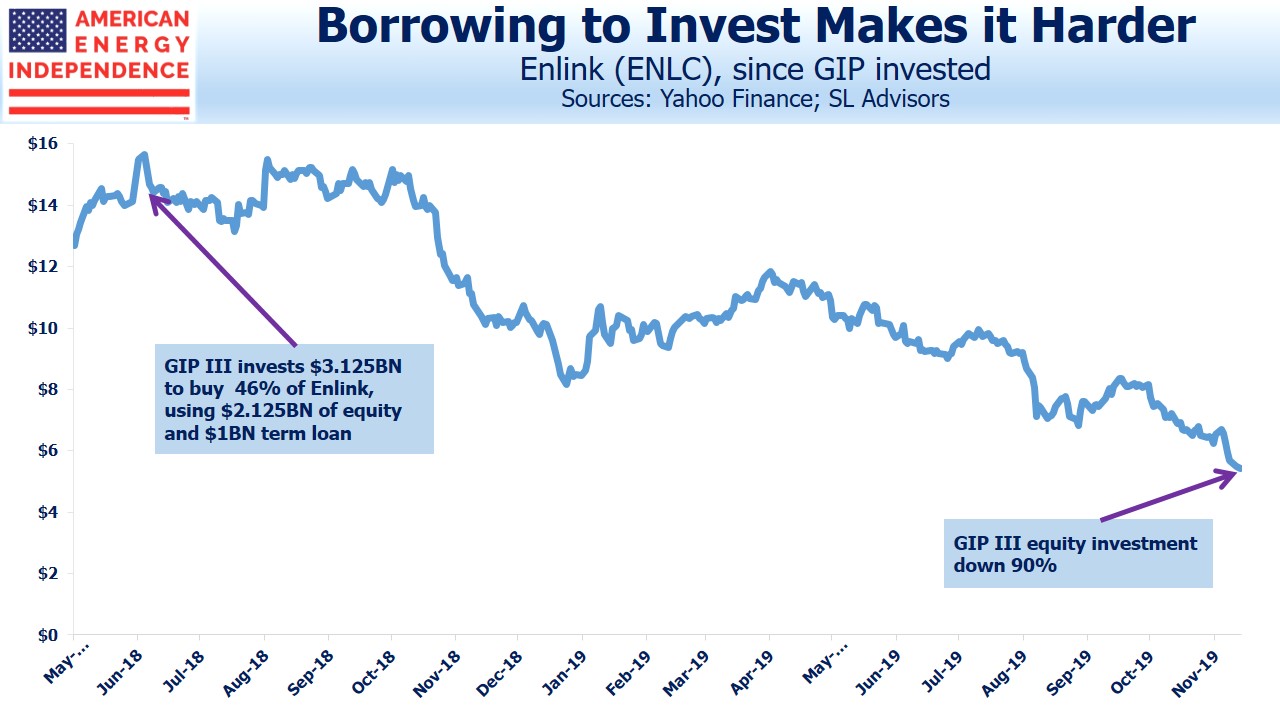 ENLC’s entire market capitalization is currently $2.6BN, valuing GIP III’s 46% stake at $1.22BN. After the $1BN term loan, GIP III’s $2.125BN equity investment is worth $225MM. On a mark-to-market basis, they’re down around 90%. Losing that much that quickly, even in this sector, is stunning. It shows that the most sophisticated institutional investors can get it spectacularly wrong. Few, including us, thought ENLC could sink this low. Its dividend yield is now 20%

GIP has built a strong reputation investing in infrastructure. They manage $51BN across various portfolios (or perhaps more correctly, now $49BN after adjusting for ENLC). They raised the funds for GIP III on the basis of their past track record. They even highlighted their ENLC investment in the marketing materials for the next fund, GIP IV.

“GIP has pledged all of the equity interests that it owns in ENLC and ENLC’s managing member to GIP’s lenders under its credit facility. A default under GIP’s credit facility could result in a change of control of the Managing Member.”

The paragraph goes on to explain that, “…if a default under such credit facility were to occur, the lenders could foreclose on the pledged equity interests.”

So the lender could, in theory, seize GIP III’s equity stake in ENLC and sell it to pay back the loan. It’s likely that whatever loan covenants were attached have already been breached, and in the apparent absence of any large sale of ENLC stock, one must assume that a renegotiation has taken place.

On ENLC’s recent earnings call, James Carreker of US Capital Advisors pursued a line of questions relating to GIP’s term loan, noting the reference to it in ENLC’s Risk Factors section of its 10K. CFO Eric Batchelder refused to comment, and offered to “…talk about it offline.” 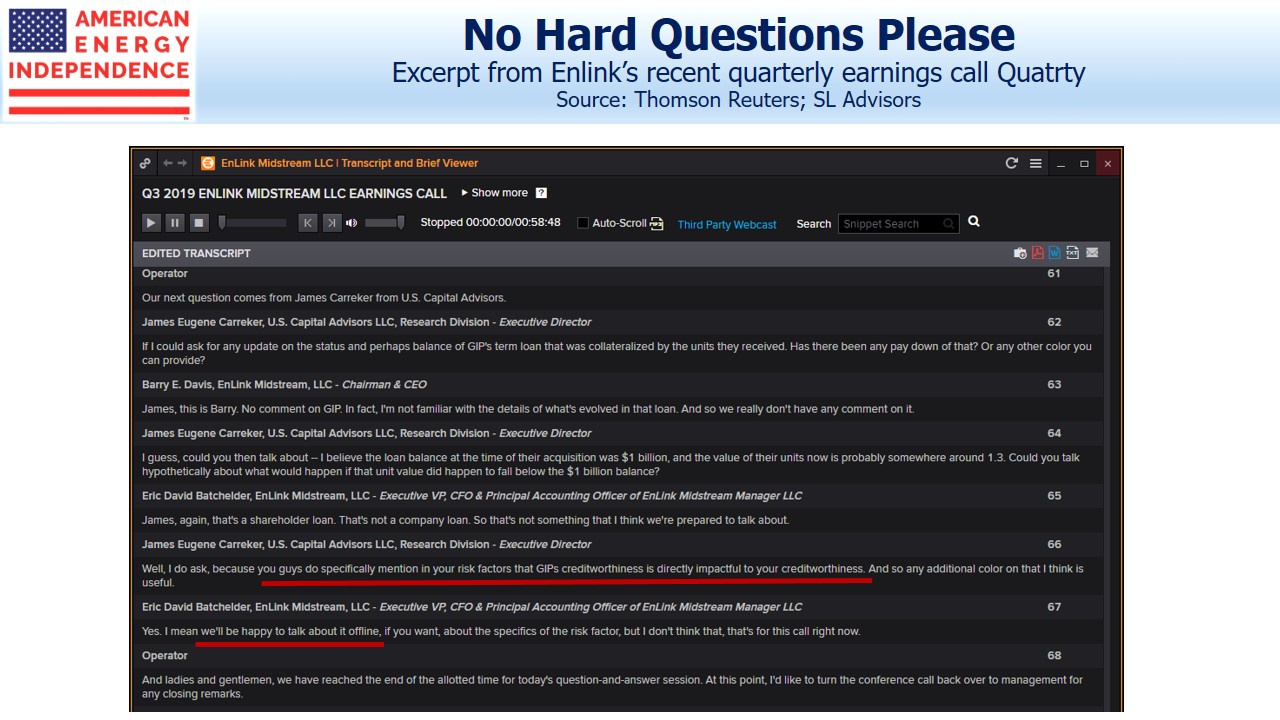 GIP’s intentions with respect to its ENLC stake are a material consideration for the other investors. ENLC’s 10K warns that, “our operating agreement limits the liability of, and eliminates and replaces the fiduciary duties that would otherwise be owed by, the Managing Member and also restricts the remedies available to our unitholders for actions that, without the provisions of the operating agreement, might constitute breaches of fiduciary duty.” Although ENLC is an LLC, like other publicly traded partnerships in this sector it provides weak investor protections.

The 10K  goes on to point out: “Our operating agreement contains provisions that eliminate and replace the fiduciary standards that the Managing Member would otherwise be held to by state fiduciary duty law.”  Further on: “…whether or not to seek the approval of the conflicts committee of the board of directors of the Managing Member, or the unitholders, or neither, of any conflicted transaction.”

ENLC’s operating agreement gives GIP an extreme asymmetric position over public holders through its role as managing member. It may have backfired on them. This blog regularly chronicles management self-dealing (see Blackstone and Tallgrass Discredit the MLP Model for example). Growing concerns of abuse and unethical (if legal) behavior have likely caused generalist investors to avoid ENLC, because of GIP’s power to similarly exploit other investors. GIP’s selective rights and canceled obligations have probably hurt ENLC’s stock price. 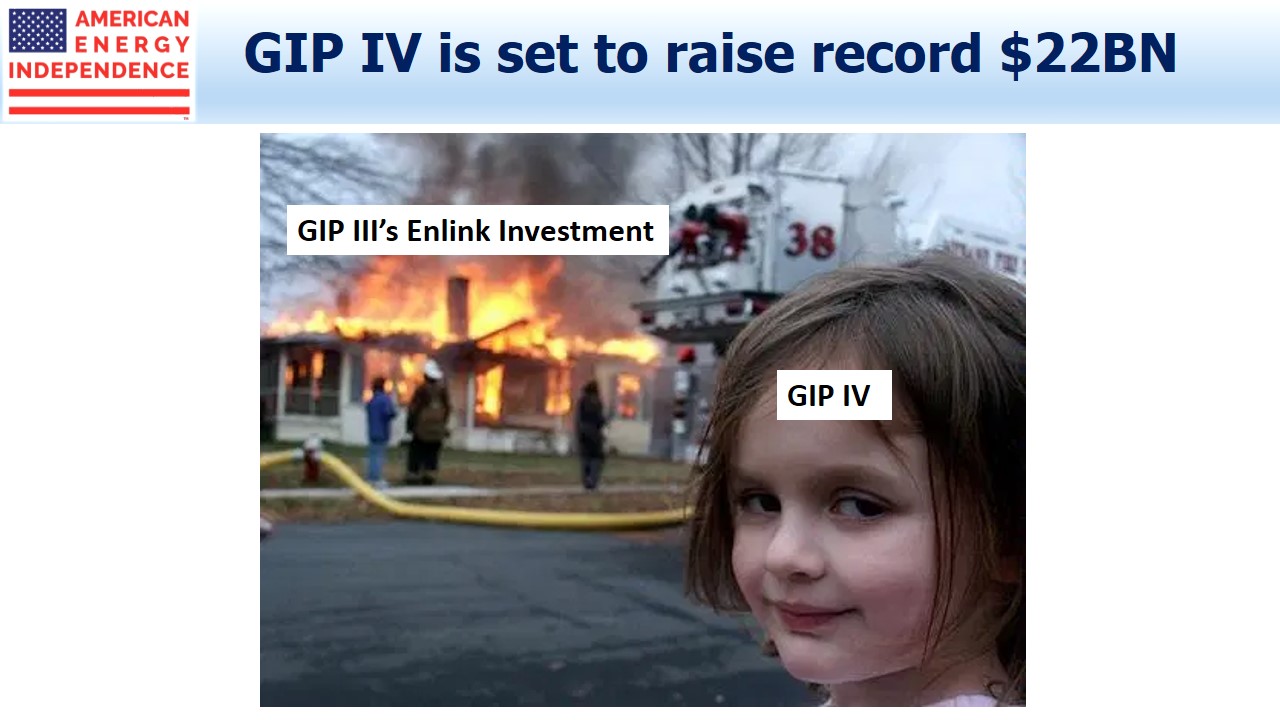 Given the substantial drop in ENLC since GIP III’s investment, you might think acquiring the rest of the company would be compelling. GIP III likely doesn’t have the ability, and because the different pools of capital managed by GIP have different investors, there would be inevitable conflict of interest concerns if, say, GIP IV bought the balance. It could be perceived that one fund was bailing out another’s poor investment decision. Private equity has to deal with that issue all the time though, and it’s likely they could find a solution. It’s similar to the conflicts committees that usually rubber stamp MLP decisions on capital allocation.

There’s probably a strong motivation for GIP to resolve this issue by year’s end, when GIP III’s annual financials will include ENLC’s public stock price performance. You can be sure they’re pondering their options right now.

We are invested in ENLC and TGE