Although it’s 36 years since I last lived in England, I retain a deep affection for the country where I grew up, as well as my English accent (so say my American friends, anyway). I’m often asked my opinion of Brexit – I have British friends on both sides of the Leave/Remain divide. While I would have voted to stay in the EU, I can understand the opposite view, even while Leavers willfully ignore the strong economic arguments against their position.

Few Americans would accept the loss of sovereignty required by EU membership. Freedom of movement means in theory all 440 million EU citizens not living in the UK could move there without the government being empowered to stop them. It’s not the only issue, but the biggest. Regulations imposed by Eurocrats in Brussels cover mind-numbingly trivial standards for goods and services, all in the interests of creating a seamless market. Many of them are easily criticized and sometimes stupid. Nonetheless, the EU remains in Britain’s interest, in spite of these substantial drawbacks. 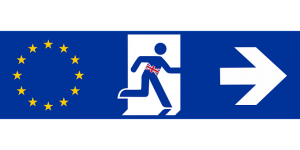 A thoughtful essay in the Wall Street Journal (The Great Brexit Breakdown) insightfully noted that “You can have national sovereignty—and that’s fine. Or you can have economic integration—and that’s fine. But you can’t have both.” America has always been the EU’s vision. Its enormous domestic market and free movement of people are fully integrated, which partly explain faster productivity growth. Texans have no sovereignty (though some in the Lone Star state will disagree). But Europe is older and far more tribal. Texans share more values with New Yorkers than the English do with neighboring France. For an island nation, centuries of repelling European invaders isn’t easily replaced with passive acceptance of rule from “the Continent” (how the British refer to the rest of Europe).

Since Britain voted by 52%-48% to leave the EU in the ill-considered June 2016 referendum, negotiations have plodded forward in a predictable, crisis-free fashion. The UK is not alone of course in drifting towards regional political affiliations. As with the U.S., voting patterns were strongly linked to demographics, income and education. London and other major cities voted overwhelmingly to Remain, embracing Europe because of their ethnic diversity. Rural, older voters wanted to Leave. The more white your neighborhood, the less you liked Romanians arriving in your country, even if you rarely encountered them. It was also Old versus Young; those with less life ahead of them imposed their desire for yesterday’s Britain on others with decades still ahead.

Brexit has already been a most awful own goal. Conservative PM David Cameron called the referendum expecting to win handily, thereby ending a corrosive debate within his own party. His subsequent resignation ushered in Theresa May, who had campaigned for Remain like most MPs. Echoing her predecessor’s poor judgment, she gambled on an early election to increase her parliamentary majority, and lost it completely. Her government is propped up by the votes of a small Northern Irish party whose allegiance was bought with higher government spending in their region.

Theresa May has conceded on the major points, as was inevitable to anyone who considered the two sides’ relative negotiating strengths. The result was that the Brexit deal she negotiated with Brussels united both camps in opposition. Facing overwhelming parliamentary defeat, she cancelled a vote she would have lost heavily. Britain has almost no high cards to play, while the EU can’t tolerate a departing member skipping happily into the sunset. Although it’s hard to imagine how anyone could have made a success of negotiating Brexit, she has failed to reach even low expectations.

If Brexit happens (still not certain), it will be on EU terms. The EU rarely makes crucial decisions without the clock ticking down to midnight. Politically, the March 29th deadline (when Brexit is scheduled to happen) remains a long way off. A wide range of outcomes is still possible, including an early election, a second referendum, reopening negotiations with the EU and even no Brexit.

Few in Britain will care to consider how a Trumpian PM would have handled the issues, but they would not be facing today’s unattractive options. PM Trump would have responded to domestic concern over free movement of people attracting too many east Europeans by imposing a unilateral halt. Disliked EU court rulings would have been ignored. It would have caused a different type of crisis than the current one, but the British would have known someone was in their corner, fighting for them. Instead, Leavers promised what was undeliverable. Theresa May has clung to power at the expense of her principles, while passively negotiating Britain onto a path of permanently weaker growth. The country of my youth has been poorly led. It’s a terrible shame.