Investors Continue To Rotate Into Energy

The pipeline sector continued on its tear last week. The catalyst was Pfizer’s vaccine announcement a month ago, but cheap valuations have drawn increasing attention as prices have risen. The buybacks announced by several companies added further support. 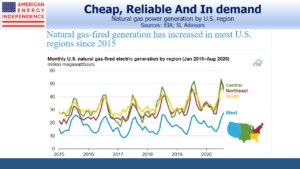 For many months, we’ve argued that the biggest problem with the sector was negative sentiment. Since peaking in 2014, midstream energy infrastructure has lagged the S&P500 significantly. The industry began to acknowledge investor criticism of over-investment back in 2018. That’s when growth capex peaked. Since then, the path to growing free cash flow has been clear – but sentiment is often the last piece to fall in place. 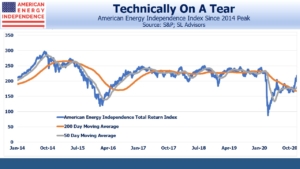 Rising stock prices are starting to do that. This is persuading investors that what appears cheap perhaps really is. We are seeing it in our own business, where inflows have returned and investors are increasingly prepared to commit capital. The energy sector ETF XLE is on track for a record year of AUM growth. 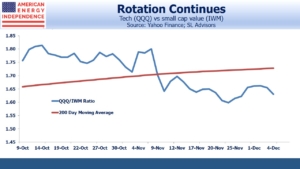 Energy is part of the broader shift from technology to value, including small cap. The widely-watched QQQ/IWM ratio solidly crossed its 200-day moving average to the downside last month, and has continued its new trend.

Since the beginning of October, the American Energy Independence Index has rallied 32%. At –8% YTD, it’s not inconceivable that it could claw back its remaining losses for the year. At the end of March, it had lost more than half its value over the prior three months.

So it’s worth pausing to examine valuation.

The components of the AEITR still yield 7.5% — still sufficiently high to suggest healthy skepticism regarding sustainability. Yet all companies except for Energy Transfer paid quarterly dividends at least as high as before. We calculate that payouts are now covered almost 2X by Distributable Cash Flow (DCF).

Free Cash Flow (FCF) should come in at $23BN for the year, up from $8BN in 2019. We entered 2020 expecting FCF to double, and by May reaffirmed that forecast (see Pipeline Cash Flows Will Still Double This Year).

The increase is fully driven by reduced growth capex. We see it rising to $44BN next year, an 11% FCF yield which is more than 2X that of the S&P500.

One of the reasons we like our prospects with incoming President Biden is that pipeline spending plans are likely to remain constrained. New projects are almost impossible nowadays. Environmental extremists have figured out how to use the court system to introduce unpredictable legal delays into any project. We are not unhappy with this (see Pipeline Opponents Help Free Cash Flow).

Long term capital commitments to fossil fuels face significant uncertainty with respect to public policy. While this will disappoint executives who love to build, investors like us will find much to like. Less building means less execution risk as well as more cash for buybacks, dividend hikes and debt reduction. How ironic that a Democrat president is likely to create an improved environment for investors – such was the exuberance unleashed by Trump’s pro-energy, deregulatory push.

Meanwhile, the U.S. Energy Information Administration reported that natural gas fired power generation increased in most of the U.S. over the past five years. Natural gas is going to see demand growth for years to come, especially from developing countries intent on raising living standards. Don’t be distracted by all the media attention to renewables. What counts is what’s actually going on.