Inflation Expectations Are Too Optimistic

Although inflation has soared to levels not seen in forty years, expectations for future inflation have stayed remarkably low. This is evident in the bond market, where the spread between five year treasury notes and five year Treasury Inflation Protected Securities (TIPS) is 2.4%, implying average inflation of that level. The forecast over ten years is similar. Inflation over the next year is clearly going to be higher. JPMorgan estimates around 4.5%. So one can infer that the bond market is forecasting inflation starting in one year of less than 2%.

Such low rates suggest a virtually unshaken confidence in the Fed’s ability to restore price stability. Moreover, the CPI tends to run 0.2%-0.4% higher than the Personal Consumption Expenditures (PCE) Deflator, the Fed’s preferred measure. This is because the weights in the PCE update dynamically to reflect actual consumption, whereas the CPI weights are updated once a decade. 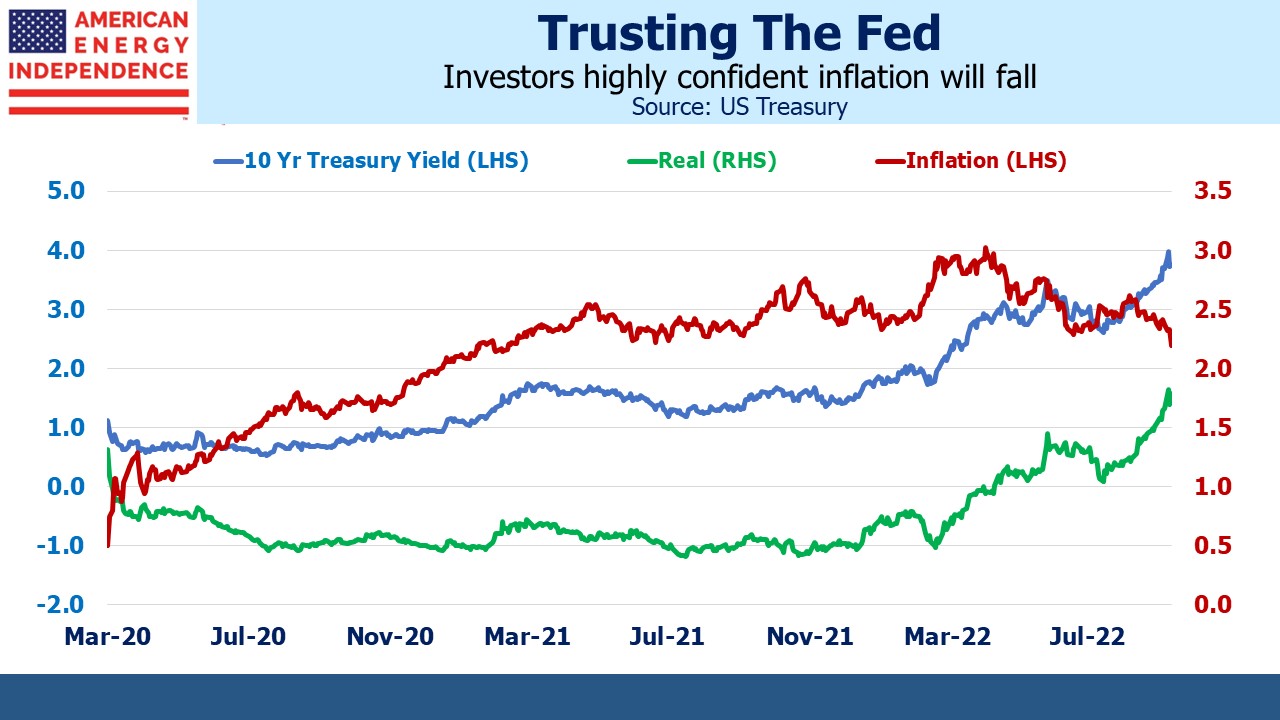 The Fed could interpret these market-based forecasts to show that long term inflation doesn’t present a problem. While it’s true that ten year inflation expectations have been trending higher since the pandemic, it peaked in April at 3% and has been declining ever since.

It’s possible that Quantitative Easing distorted the market forecasts that the bond market would otherwise provide. Although the Fed is now letting its holdings run off, they still hold over $5.7TN in treasury securities and $2.7TN in mortgage-backed securities. Return-insensitive investors including from Japan ($1.3TN) and China ($1TN) keep yields lower than they would be otherwise, reducing the inflation forecast embedded.

But the Federal Reserve also owns almost $400BN in TIPs, where their buying would have the opposite effect on inflation expectations. It’s hard to say what the net distortion is, if any. The Fed owns 24% of our $21.25TN in bills, notes and bonds outstanding versus 26% of the TIPS. Central bank activity since the 2008-09 financial crisis has rendered the forecasts embedded in the bond market less useful. 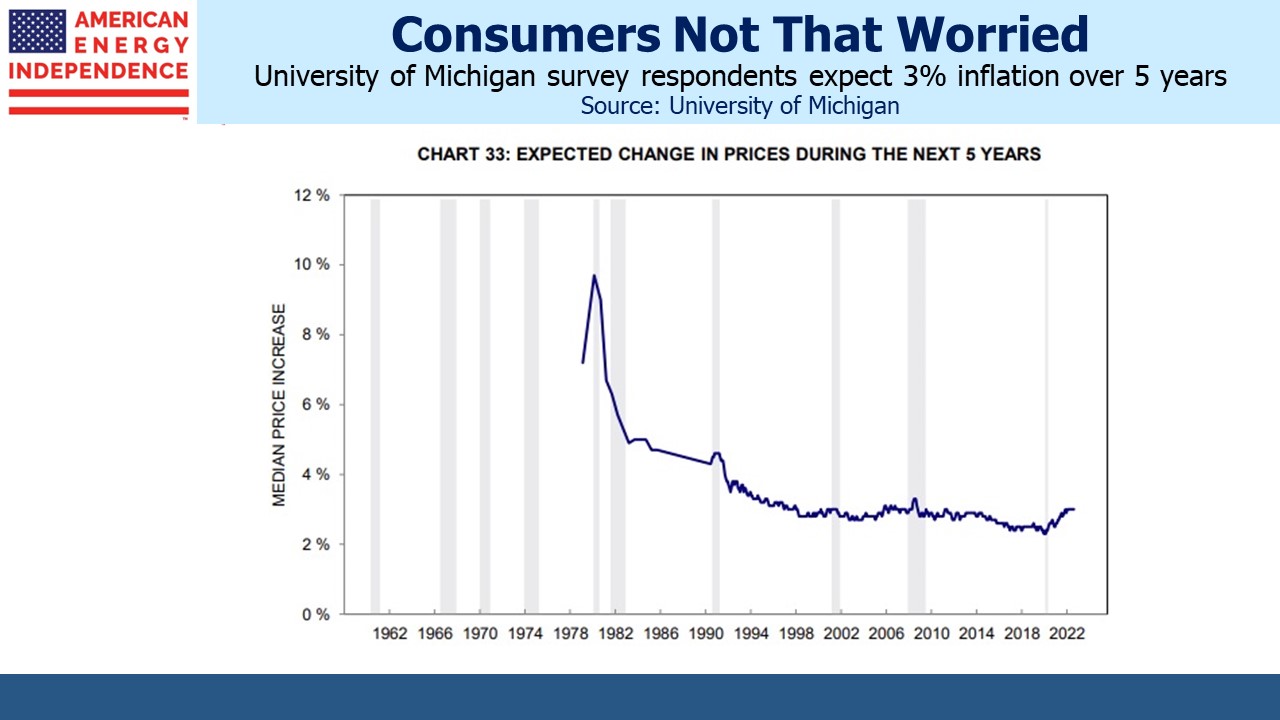 Other measures of future inflation confirm the benign outlook of bond investors. The University of Michigan survey shows consumers expect 3% inflation over the next five years and 5.1% over the next twelve months, which implies around 2.5% after one year.

The constrained outlook provides the Fed with an excuse to pause tightening (i.e. declare victory and withdraw) at any time. They seem to be focused on current data even though monetary policy is widely understood to impact with a considerable lag. There seems to be no risk premium to allow for the possibility that inflation fails to return to 2% in a timely manner.

Goldman’s global head of Commodities Research provided an interesting perspective on the Meb Faber Show (podcast) last week. For at least a year after inflation surged the Fed blamed supply problems related to the pandemic. In abandoning “transitory” they embraced the traditional approach of tightening policy to slow demand.

Currie argues that demand for commodities is driven by developing countries where most of the world’s population is striving for higher living standards and consuming more of everything. Proponents of ESG investing are impeding the capex cycle that would typically see greater investment in supply in response to higher prices.

For example, the Dallas Fed Energy Survey found widespread concern among executives about public policy. Comments included this: “The biggest issue we have in our industry is the federal government, which advocates for our extinction. This has affected our ability to hire new, young talent from colleges because they’ve been brainwashed into believing that our industry is bad and that our industry is disappearing, with no future for them. This will be an issue in our industry and the public will pay with higher commodity costs. The capital being chased out of our industry is leading to less supply, and that always leads to higher prices.” He might have added that rising interest rates also impede the investment of capital in new production.

This illustrates how environmental extremism is inflationary. By attacking supply without addressing demand, it impedes investment in new supply. Fortunately, public companies are starting to push back. When Rep Rashida Tlaib (D-MI) asked JPMorgan CEO Jamie Dimon if he would endorse her ESG platform by ceasing funding of new oil and gas projects, Dimon responded, “That would be the road to hell for America.” Goldman’s Currie argues that this commodity cycle will see a constrained investment in new supply because of lunatics like Tlaib.

In the UK, newly installed Chancellor of the Exchequer (US equivalent is Treasury Secretary) Kwasi Kwarteng is likely to become the shortest-tenured in history. The UK is showing what happens when US-style fiscal profligacy is attempted without the benefit of being a superpower issuing the world’s reserve currency. An op-ed in the Financial Times described the borrowing splurge to fund elimination of the top rate of income tax as “Reaganomics without the dollar.”

UK bond yields have soared, prompting the Bank of England to shelve plans to reduce their balance sheet in order to support the market. Conservative PM Truss, half of whose three weeks in office has been spent in mourning for the late Queen with the other half managing a self-induced crisis, blames Russia’s invasion of Ukraine for the bullet in her foot.

Britain’s GDP growth ranks 19th in the G20, only ahead of Russia.

Sometimes voters make choices that aren’t in their best interests. Brexit is the proximate cause of sluggish UK growth, by choosing increased barriers to trade with the EU and by extension to most of the free world. Truss’s fiscal expansion is a response of the party that championed Brexit to its dismal economic result. Critics include the IMF, Ray Dalio, and Atlanta Fed president Raphael Bostic.

The hapless UK chancellor dubbed “Kami-Kwasi” by the tabloid press is likely to be sacrificed as a face-saving measure before the proposed fiscal expansion is inevitably diluted. If US politics gets you down, following the UK will remind that things could be worse. 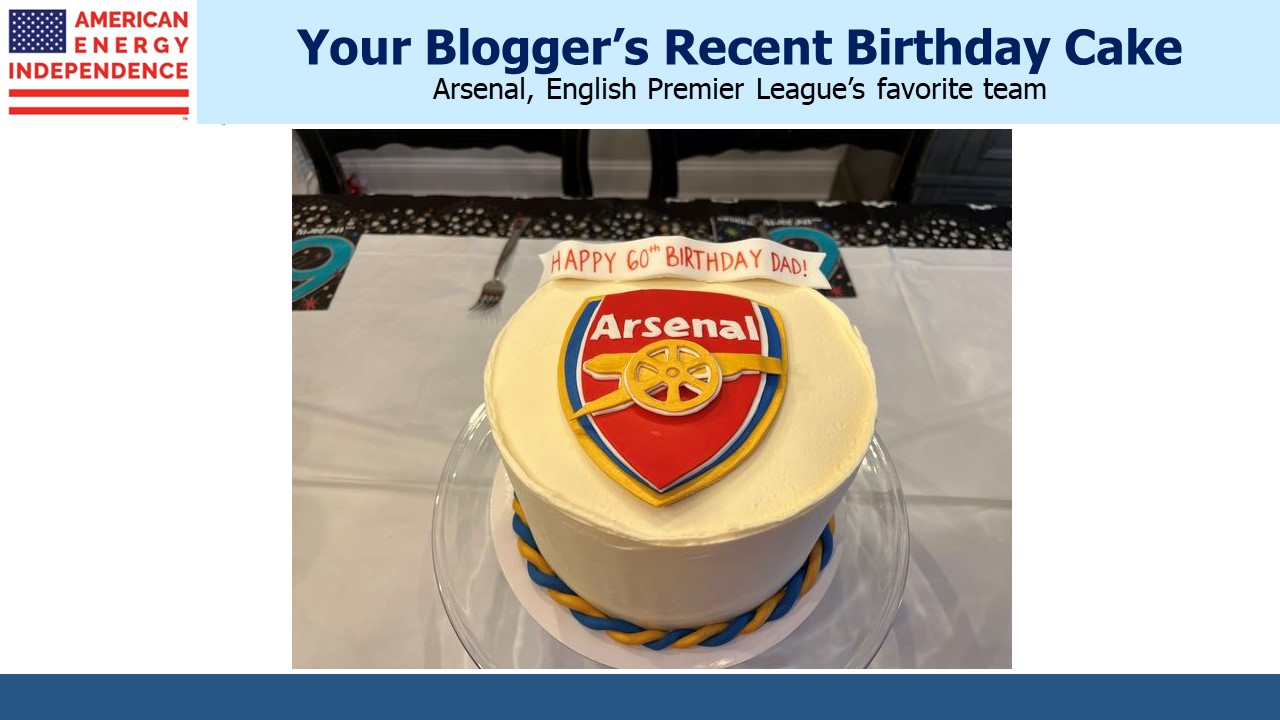